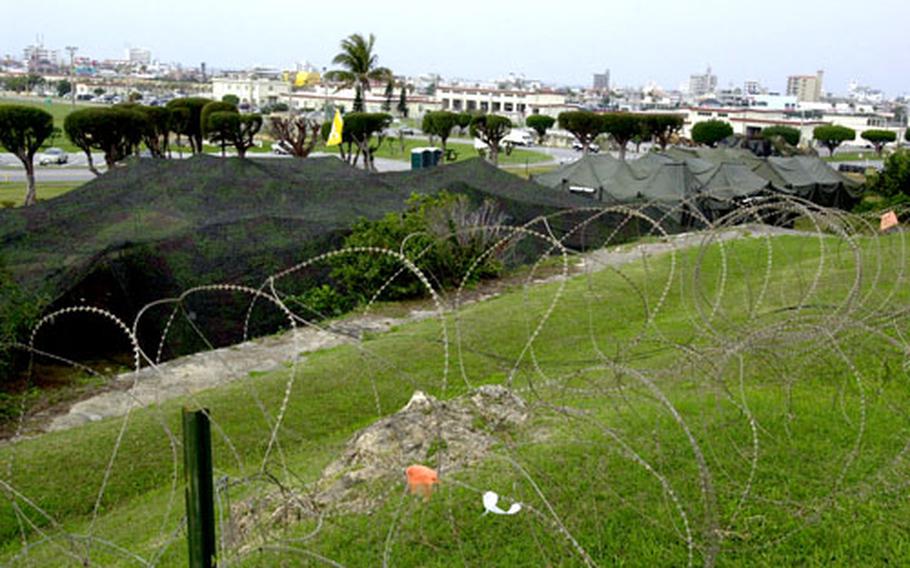 Marines from Marine Wing Communication Squadron 18 set up a communications site, complete with camouflage netting and concertina wire, on Camp Foster, Okinawa, from Jan. 13 to Feb. 2. The unit set up to practice for upcoming exercises in South Korea. (Fred Zimmerman / S&S)

CAMP FOSTER, Okinawa &#8212; A group of Marines recently took to the field for three weeks here without ever leaving the confines of the camp.

Staff Sgt. Elisa Fritcher said the exercise&#8217;s purpose was two-fold: to get them accustomed to working in the field and to prepare them for several upcoming deployments to South Korea.

The squadron and Marine Wing Support Squadron 172 set up a command post and communications site, which they ran from Jan. 13 to Feb. 2. Marines from 7th Communication Battalion also took part, as well as several from MWSS-171, who traveled to Okinawa from Marine Corps Air Station Iwakuni on mainland Japan to take part, according to Fritcher.

She added that numerous other air wing units were participating, and the site was communicating with Marine Corps Air Station Futenma.

The Marines set up a satellite dish, several tall, high-powered antennas, two radio tents and a 7-ton truck equipped to serve as a telephone switchboard.

In addition to checking their gear, the Marines also ran the site as if they were deployed. They covered their gear and tents with camouflage netting, strung concertina wire around all their equipment and had guards standing watch, allowing only authorized personnel into the site.

In a perfect world, Fritcher said, her unit could have such a communication site up and running in about four hours.

But then again, she added, nothing is ever perfect.