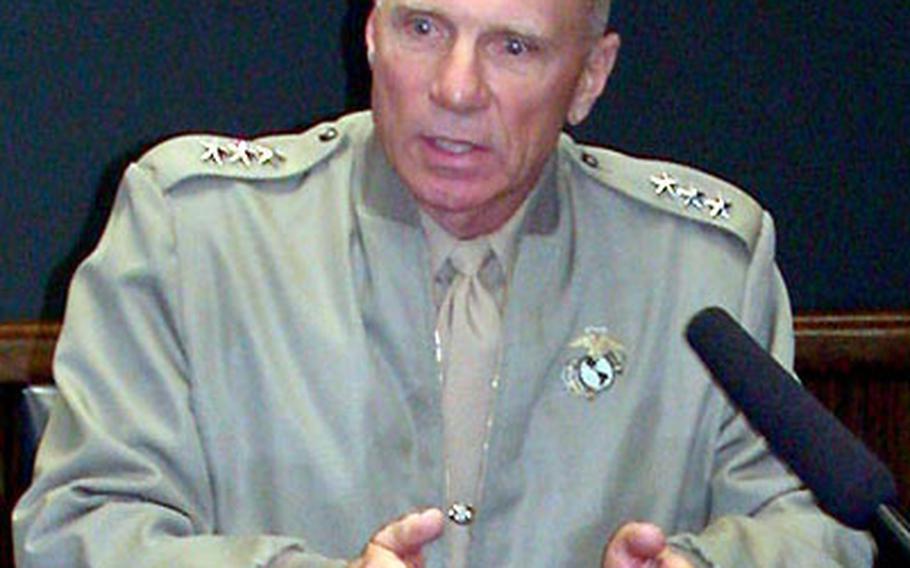 ARLINGTON, Va. &#8212; The Marine Corps&#8217; commandant-to-be, Lt. Gen. Michael Hagee, has stopped wearing three ribbons because they have not been found to be sanctioned by his service record.

Hagee says he is confident he has earned the ribbons, even though a thorough check, or a scrub, of his awards record, which he ordered several months ago, so far has not found support for them. The scrub is continuing.

He found no documentation saying he was authorized to wear three awards he says he should be entitled to: The Vietnam Gallantry Cross Individual Citation, the Humanitarian Service Medal and the Navy Unit Commendation.

Hagee, who until November led 45,000 Marines at Camp Pendleton, Calif., as the commanding general of the 1st Marine Expeditionary Force, becomes the Corps&#8217; 33rd commandant during a change of command ceremony Monday in Annapolis, Md. He replaces Gen. James L. Jones, named the Supreme Allied Commander Europe and commander of the U.S. European Command.

It is unclear if Hagee told anyone about the discrepancy before Stars and Stripes began asking questions Friday, based on a comparison of Hagee&#8217;s photo as a three-star general and the new one as commandant.

Jones&#8217; public affairs staff told him Friday that Stripes was asking about the issue. They would not say whether Jones knew about it beforehand.

Hagee said he did not remember when he told Jones.

Hagee said he does not know why a review of his record seven years ago did not note the lack of documentation, but he said it&#8217;s an example of the problems with the record-keeping system.

While Hagee acknowledged in a news conference Tuesday that the wearing of unauthorized medals might violate the Uniform Code of Military Justice, he said that each incident must be considered on a case-by-case basis and that he believes he earned the awards and simply cannot find the supporting paperwork.

&#8220;Even though I know that I was awarded the Vietnamese cross of gallantry, even though I had the paperwork, even though my name wasn&#8217;t on [a list] for the Humanitarian Service award, and even though they haven&#8217;t completed the search on the Navy Unit Commendation, I did not have documentation for those three and it was time to take my picture.

He&#8217;ll especially pursue the Humanitarian Service Medal, &#8220;because there are a number of Marines out there whose names are not listed, and who, in fact, were there. We need to get that resolved.&#8221;

The Humanitarian Service Medal, established in 1977, is awarded to servicemembers who, after April 1, 1975, distinguished themselves by meritorious direct participation in a Defense Department-approved significant military act or operation of a humanitarian nature.

The Vietnam Gallantry Cross was awarded by Vietnam to individuals at the unit, regiment, brigade, division, corps and armed forces levels for valorous achievement in combat during the Vietnam War between March 1, 1961, and March 28, 1973.

The most famous incident in which a senior military officer&#8217;s decorations were called into question occurred in 1996, with then Chief of Naval Operations Adm. Jeremy &#8220;Mike&#8221; Boorda.

No one knows exactly why Boorda took his life at the age of 56, but one factor allegedly was his distress over an upcoming article in Newsweek.

Newsweek was investigating whether Boorda had been wearing two combat &#8220;V&#8221; decorations &#8212; tiny bronze pins which signify valor in combat &#8212; which he had not officially earned.

Hagee is not the type of man who would have intentionally donned ribbons he did not earn, said former Marine Commandant Charles Krulak.

&#8220;This is a man of integrity,&#8221; he said. &#8220;He did the right thing and we ought to be applauding that. &#8230; I have known him for years and he&#8217;s absolutely a man of integrity. The reality of life is that service record books, particularly involving awards and decorations, are not always accurate.

&#8220;[The Vietnam Gallantry Cross] came through the South Vietnamese award systems and was an actual document written on the flimsiest of paper &#8230; a piece of paper that is like toilet paper. That&#8217;s what it comes on,&#8221; Krulak said. &#8220;If it ever made it from a war zone all the way to Marine Corps headquarters is hard to say.&#8221;

His career background includes spending a year beginning in 1995 at the CIA, first as a senior military assistant to John M. Deutch, and then as an executive assistant when Deutch became the agency&#8217;s director.

&#8220;He is one of the most excellent general officers I&#8217;ve ever had the pleasure of working with and I&#8217;ve worked with hundreds,&#8221; Deutch, now an Institute Professor at the Massachusetts Institute of Technology, said during a brief telephone interview Monday.

Hagee&#8217;s stint at the CIA earned him the National Intelligence Distinguished Service Medal, the highest award bestowed by the U.S. intelligence community.

&#8220;Not only did I spend a lot of time doing this, there are a lot of people who have been working on this. We can&#8217;t do this for all Marines. One of the lessons, and I really do take lessons from this, one the individual needs to be more aggressive. Having said that, we need to have a system, which we don&#8217;t have now &#8230; that is more responsive and easier to use.&#8221;

Hagee reiterated he thinks he did the right thing by removing the ribbons before posing for his official commandant photo.

Part of the armed services culture is the wearing of awards for which an individual rates.

Awards Branch has unsuccessfully searched through the 1980s for documentation to support Hagee&#8217;s Navy Unit Commendation and will continue the search, he said. He believes it was awarded in the 1970s.

According to his service record from the Records Branch, Lt. Gen. Michael Hagee is rated to wear the following:

&#182; Navy and Marine Corps Achievement Medal with one gold star