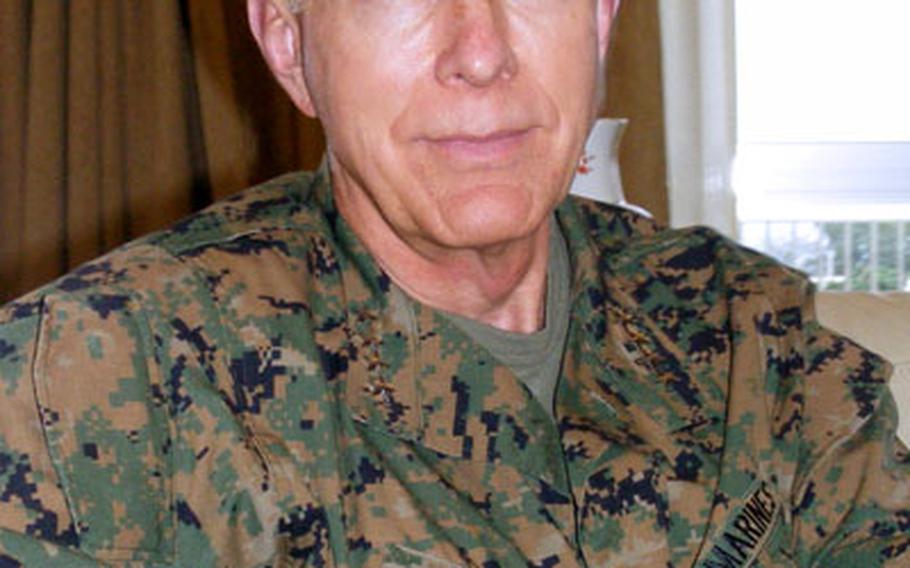 CAMP FOSTER, Okinawa &#8212; As long as Marines remain on Okinawa, it&#8217;s vital to retain both ground and air elements on the island, the commandant of the Marine Corps said Tuesday.

&#8220;It&#8217;s important that we keep our Marine air-ground task force together,&#8221; said Gen. James T. Conway, who stopped on Okinawa on his way to participate in the commemoration of the 65th anniversary of the Battle of Iwo Jima.

In an interview with Stars and Stripes, he emphasized that closing Marine Corps Air Station Futenma and moving Marine air operations to a new facility on Camp Schwab remains the best option for maintaining training and ensuring stability in the region.

The U.S. and Japan agreed in 2006 to close Futenma and move Marine air operations to a new air facility to be built on the lower part of Camp Schwab. However, Japan&#8217;s new left-center government decided late last year to review the project, examining how the Camp Schwab project was selected and whether the Marines can be based somewhere else.

On other matters, Conway said he is pushing for funds to replenish equipment.

Anticipating his trip to Iwo Jima, Conway said the 1945 battle remains an important part of the legacy of the Marine Corps.

&#8220;And when you look at those 36 days of battle and the determination, the courage, the sacrifice that those three divisions of Marines and their supporting elements demonstrated, it&#8217;s just incredible,&#8221; he said. &#8220;The more I research it, the more dumbfounded I am by the ability of people to endure what they saw for 36 days.&#8221;

Conway said Afghanistan is becoming another important part of the Corps&#8217; legacy.

&#8220;You&#8217;re going to see an increasing number of Marines in Afghanistan,&#8221; he said. &#8220;I received a cable this morning that said that the last Marine convoy had left al-Asad in Iraq, so our chapter in Iraq has almost exclusively closed out at this point, which allows us to focus, like we think we need to focus, on Afghanistan.&#8221;