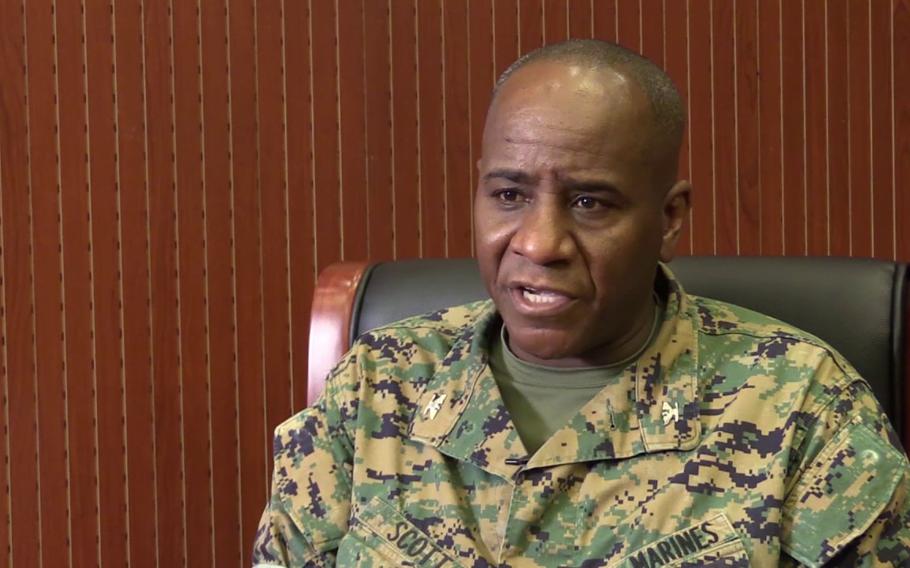 U.S. Marine Corps Col. Kevin Scott, 51, was arrested on Saturday, Oct. 14, 2017, and charged with “soliciting sexual intercourse with a condom for $80,” according to the Polk County Sheriff’s Office. (John Raven/U.S. Air Force)

WASHINGTON — A Marine colonel on temporary assignment at U.S. Central Command was arrested in Florida on Saturday attempting to solicit sex from an undercover cop working as part of a prostitution sting, according to the Polk County Sheriff’s Office.

Col. Kevin Scott, 51, was arrested and charged with “soliciting sexual intercourse with a condom for $80,” said Brian Bruchey, a public information officer for the Polk County Sheriff’s Office. He was released on $500 bond. Scott is assigned to U.S. Central Command headquarters at MacDill Air Force Base in Tampa to coordinate training missions.

Scott, now a logistics officer, entered the Marine Corps in 1984 and was assigned to Joint Staff Suffolk, Virginia, according to published reports.

Scott solicited sex from an undercover detective who was operating as part of a sting called “Operation No Tricks, No Treats,” meant to sweep up suspects seeking prostitution and human trafficking operations. The sweep netted 277 suspects, according to Bruchey.

Bruchey said Scott initially posted an advertisement on Backpage.com seeking a prostitute. Police spotted the ad and had a undercover detective respond and wait to meet Scott before making the arrest.

Scott was driving a car leased by the federal government when the arrest was made Saturday at about 11:30 p.m. A police sergeant with the Polk County Sheriff’s Office, now relieved, was also arrested.

The arrests in the sting resulted in 36 felony and 298 misdemeanor charges with more to follow, according to the Polk County Sheriff’s Office.

“Operation No Tricks, No Treats” has been designed specifically to target online prostitution and potential human trafficking. Police placed ads on websites and social media to draw potential suspects while also targeting ads already in place.

At least 51 prostitutes advertising online have been arrested along with solicitors, according to the Polk County Sheriff’s Office.