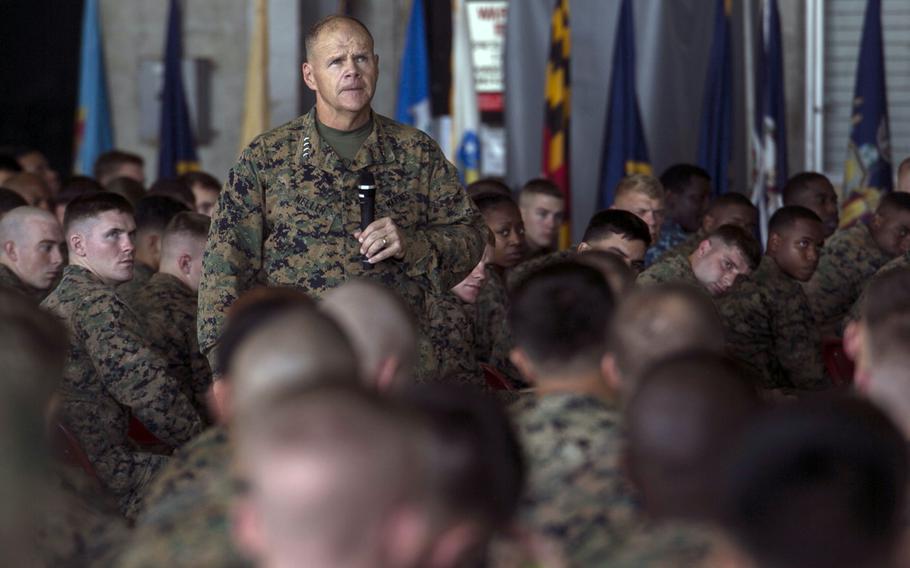 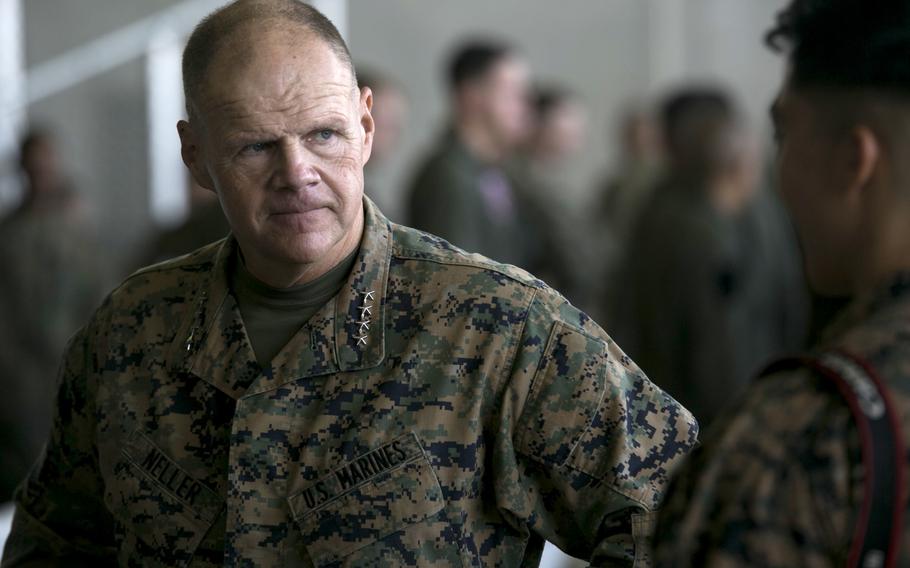 CAMP KINSER, Okinawa — Marine Corps Commandant Gen. Robert Neller told Marines here Monday that they could rout the Islamic State group from Iraq and Syria, but it is up to politicians to determine what comes next.

Marines asked Neller about U.S. policy regarding the Islamic State during a series of town halls here on his first visit to Okinawa since assuming the top Marine position in September.

“I’m going to do what the president tells me,” Neller said to laughs. “That wasn’t the answer you were looking for, was it?”

He said he had no doubt the U.S. and its allies could easily rout the Islamic State and got rousing cries of “oorah” when he asked: “And would we all like to do that?”

“If we went there, is there any doubt in your mind, if we got a force together on the Syrian border and we drove into Raqqa, we would beat them into the ground like tent pegs?” Neller asked, again to shouts of “oorah.”

“So we’re in Raqqa and they’re all dead or captured or killed or wounded, and we’re standing in Raqqa and we’re like, ‘Now what?’ So before we go do that I think its fair we ask our political leadership ... when we’re done, what’s next?”

“Rebuilding, sir,” a Marine shouted from the audience.

Neller, who served a stint as deputy commanding general of the I Marine Expeditionary Force during the Iraq War, said he still carries his casualty card from Iraq, and if it were up to him, he would not ask them to go to war unless there was a plan for its aftermath.

But he said he believes the Nov. 13 terrorist attacks in Paris, which killed 130 people, were meant as a distraction because the Islamic State is “close to breaking” due to relentless coalition airstrikes and operations against them.

Islamic State militants have been driven back recently in areas of Iraq and Syria, but since the attacks in Paris, critics of the administration policy have said the U.S. needs to be more aggressive.

Neller said that while the U.S. has been embroiled in wars in Iraq and Afghanistan, potential adversaries have been increasing their military strength.

“While we’ve been fighting, our adversaries, many of them in this part of the world — pick one: China, North Korea, Iran, Russia — what have they been doing? Making money, buying new gear, stealing all of our secrets,” he said. “Ever look at all the Chinese equipment? What’s it look like? It looks like our stuff. How is that? They stole our stuff, fair and square.”

Neller touched on a variety of other subjects, including women in combat. He said he wasn’t overly concerned about women fighting on the front lines, a decision he expects by January. He said the standards for most combat-related jobs in the Corps remain high for whoever ultimately fills them.

He unveiled an initiative called “Protect What You’ve Earned.”

Neller said he was disheartened receiving reports of alcohol-related mishaps and Marine deaths and asked the Marines in attendance to think about all they had gone through to earn their career, benefits and the uniform before they make a poor decision and lose it all.