Staff Sgt. Ismael Esconde has folded thousands of cranes and donated them to area hospitals, nursing homes and Japanese civic organizations where he has been stationed over the past year to show appreciation to the Japanese allies of the United States. (Brittney Vella/U.S. Marine Corps)

Staff Sgt. Ismael Esconde has folded thousands of cranes and donated them to area hospitals, nursing homes and Japanese civic organizations where he has been stationed over the past year to show appreciation to the Japanese allies of the United States. (Brittney Vella/U.S. Marine Corps) 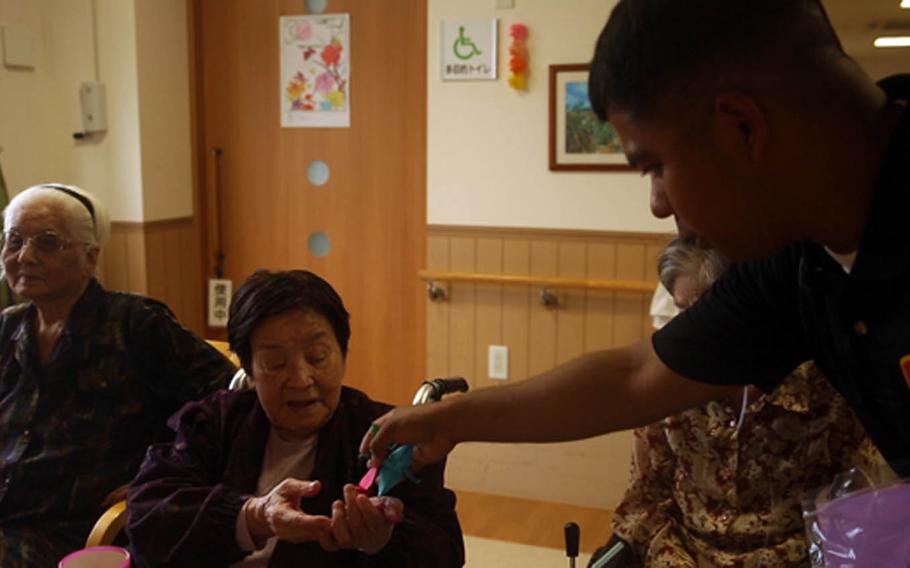 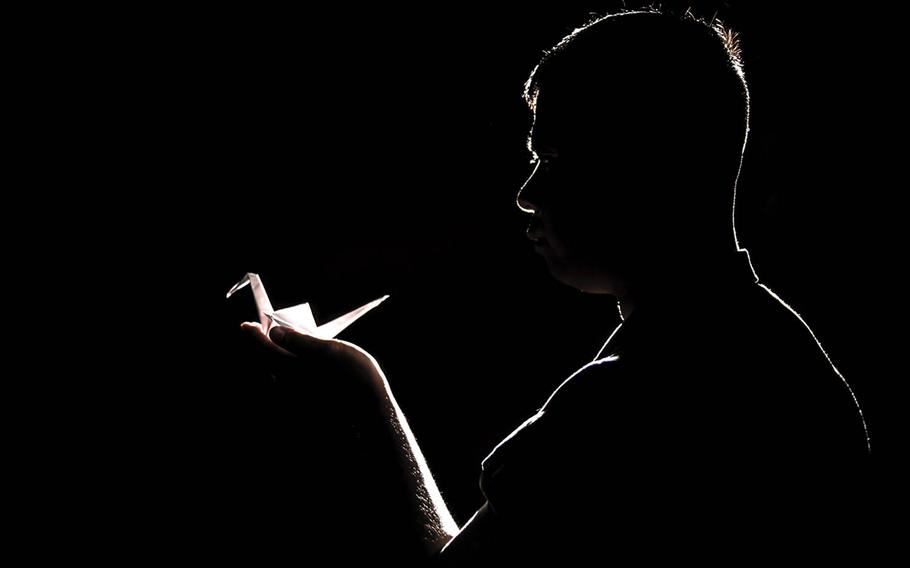 CAMP FOSTER, Okinawa — Sadako Sasaki began folding paper cranes as she lay dying of leukemia in a Hiroshima hospital 10 years after the atomic bombing in 1945. Legend had it that if she could fold 1,000 of the elegant little birds, she would be rewarded with a get-well wish.

The 12-year-old died eight months later before reaching her goal, but she captivated a nation and became an everlasting symbol of peace and denuclearization around the world.

Sixty-two years after her death, Sasaki’s message lives on through an unlikely source: a U.S. Marine.

Staff Sgt. Ismael Esconde has folded thousands of cranes and donated them to area hospitals, nursing homes and Japanese civic organizations where he has been stationed over the past year, most recently on Okinawa and now Hawaii, to show appreciation to the Japanese allies of the United States. He has caused quite a stir; people are generally surprised to see a Marine doing origami for the wellness of others.

Sasaki “knew she wasn’t getting any better but she continued to fold so that no one else had to go through what she had to go through,” Esconde, 32, said recently from Hawaii, where he serves as the substance abuse control officer with Headquarters and Service Company, 3rd Battalion, 3rd Marine Regiment. “It’s hope; it’s selflessness … That was her wish. It was for peace.”

Esconde, from Inglewood, Calif., got a book on origami while in high school, but he never opened it. After graduating in 2003, he joined the Marine Corps. A year later, he finally got around to the book on the ancient art of folding paper into shapes and animals as a way to ride out rolling blackouts at Marine Corps Air Ground Combat Center Twentynine Palms in California.

“It took me several days to figure out how to do it,” he said.

Soon, Esconde had 12 shapes in his repertoire, including variations of a crane.

Over the years, he deployed to Iraq and Afghanistan, but it wasn’t until a 2016 deployment to Okinawa that he realized his hobby might be of greater use. He had always been moved by Sasaki’s story, but as he found himself lost on Kadena Air Base one day during his deployment, he came face to face with a sign outside the base that read, “No base, no rape, no tears.”

“I took that hard,” he recalled. “I’m not like that and neither are any of the Marines I have ever served with.”

So Esconde began to fold June 26, 2016, he said. A month later, he had 1,000 paper cranes. In memory of Sasaki, he decided to gift them to the pediatric ward at Hokubu Hospital in Nago.

Over the next few weeks, fellow Marines and locals had heard about the lone Marine folding cranes for sick children. Esconde was able to recruit four other Marines and an Okinawan woman to help with a second batch.

They folded 1,000 cranes and donated them to Naha City Hospital on Nov. 10. The hospital staff used some to decorate their Christmas tree, said Hiroko Janado, chief nurse at the Naha City Hospital’s pediatrician ward.

“We have saved the rest and when a child is released from the hospital, we give one as a congratulatory message,” Janado said. “The children all love them.”

The group then grew to 10 other Marines from six units on Okinawa. They donated 1,000 cranes to Pay Nursing Home Fuga in Kin on Nov. 25. Each resident received a pair. They are all war survivors and are very sensitive about the world and peace, said Takateru Iju, manager of the day-care facility “Challenge,” which shares the building with the nursing home. They plan to string together the rest and display them as their next big project.

It also left an impact on the other participants, some of whom are still on Okinawa.

“It was nice to be able to show the Japanese people that we want to learn about their culture, to show them we care and to thank them for letting us stay out here in their country,” said Marine Lance Cpl. Shain Kelley. “I thought it was awesome.”

Esconde returned to Hawaii in December at the end of his unit’s six-month rotation, and he continued to fold.

In April, he donated 1,000 cranes to the Hawaii United Okinawa Association. He said they were to be part of its Battle of Okinawa remembrance ceremony June 22.

“I guess I always wanted to try and make a difference and help people out,” Esconde said. “When the opportunity came in Japan through origami, that’s what I did.”

Esconde said that folding the cranes is relaxing. He can often be seen doing it in the field during the downtime between training exercises. One day, he hopes to return to Japan and meet Sasaki’s family so he can tell them how much she inspired him.

“It’s wishing others well,” he said. His attention once again turned to the poster he had seen outside Kadena in 2016. “If I can change one mind with my actions, I think we would have done a service to both the Japanese and American people.”