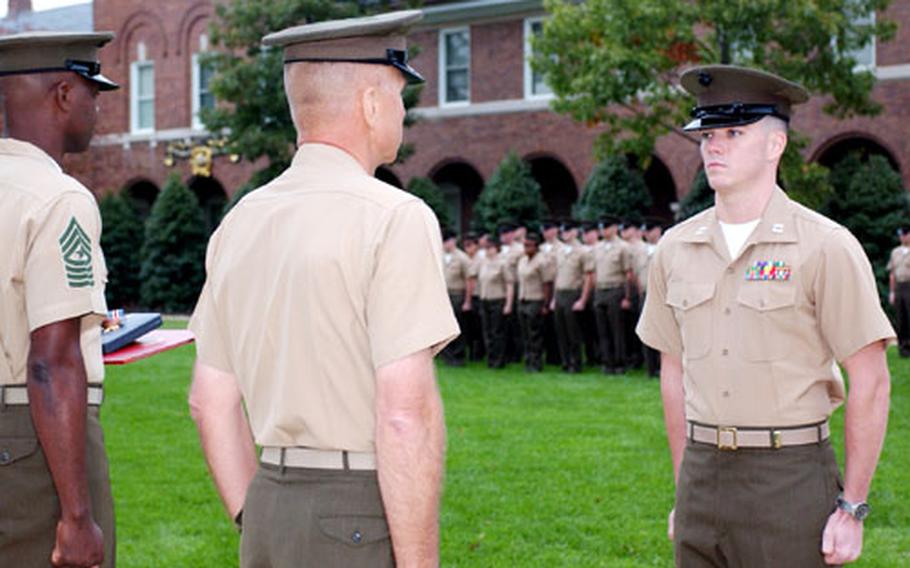 WASHINGTON &#8212; About 1,200 Marines at the barracks at Eighth and I streets watched as Capt. Josh Glover received his Silver Star for leading his troops through enemy ambushes and helping rescue Marines trapped behind enemy lines.

&#8220;Once the sun came up, we started receiving some incoming fire. One of the rounds of incoming mortar fire exploded near one of my trucks and created three casualties,&#8221; Glover told Stripes Nov. 4.

With wounded Marines, Glover got permission to return to base, he said.

On the road back, Glover&#8217;s convoy ran into between 30 and 40 insurgents hiding in reeds, irrigation ditches and standing by the road firing from the hip, he said.

Glover said he instantly made the decision to run the gantlet. &#8220;I already had Marines bleeding,&#8221; he said.

As they plowed on, one of the Humvees was hit, wounding several more Marines, one fatally, Glover said.

Running on flat tires, the convoy made its way back to base, only to be sent out again about seven hours later.

About 15 Marines were trapped behind enemy lines after insurgents hit their amphibious vehicle with several rocket-propelled grenades, killing one Marine and wounding two others, he said.

Despite losing one of their own that morning, Glover&#8217;s Marines were ready to go again, he said.

Glover also credits maintenance crews for getting the damaged vehicles back up and running so quickly.

While looking for the stranded Marines, three insurgents fired an RPG at Glover&#8217;s vehicle at close range.

Glover said a Marine in his vehicle cut the insurgents down with a squad automatic weapon, but that clued other insurgents to the Marines&#8217; location, and the shooting really started.

Ultimately, Glover and his Marines fought their way through to the Marines trapped behind enemy lines and were able to get them and the slain Marine&#8217;s body out.

Glover&#8217;s platoon had helped out other Marines and done so in the memory of their fallen battle-buddy, Pvt. Noah Boye, Glover said.

Glover said he is somber about receiving the Silver Star for his actions.