Marine bomb expert shaken but not deterred by IED 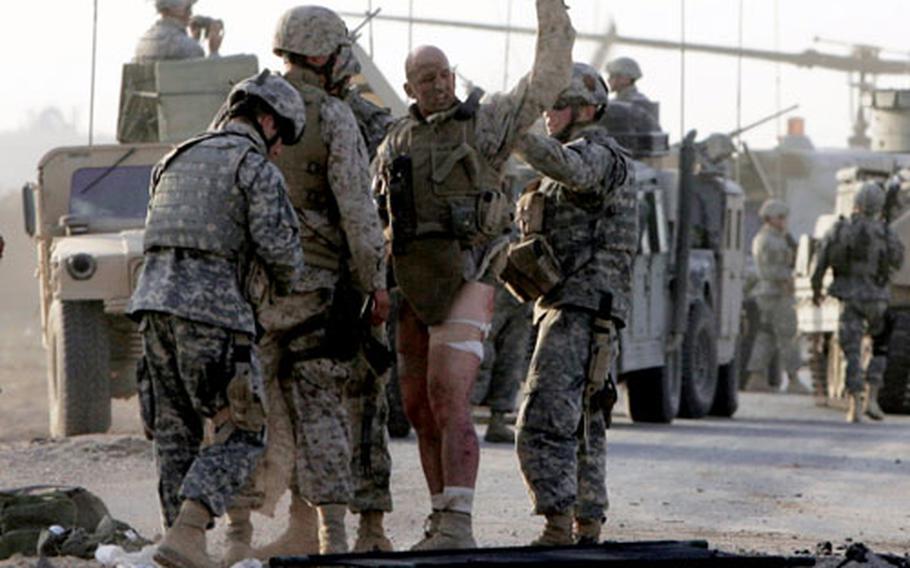 Gunnery Sgt. Michael Burghardt signals his defiance after being struck by an improvised explosive device on Sept. 19 near Ramadi, Iraq. The Marine refused to be carried away on a stretcher and walked under his own power to a waiting medevac. Among those attending to the Marine are Spc. John Adams (far left in front) and Pfc. Darin Nelson. (Jeff Bundy / Omaha (Neb.) World-Herald)

Gunnery Sgt. Michael Burghardt signals his defiance after being struck by an improvised explosive device on Sept. 19 near Ramadi, Iraq. The Marine refused to be carried away on a stretcher and walked under his own power to a waiting medevac. Among those attending to the Marine are Spc. John Adams (far left in front) and Pfc. Darin Nelson. (Jeff Bundy / Omaha (Neb.) World-Herald) 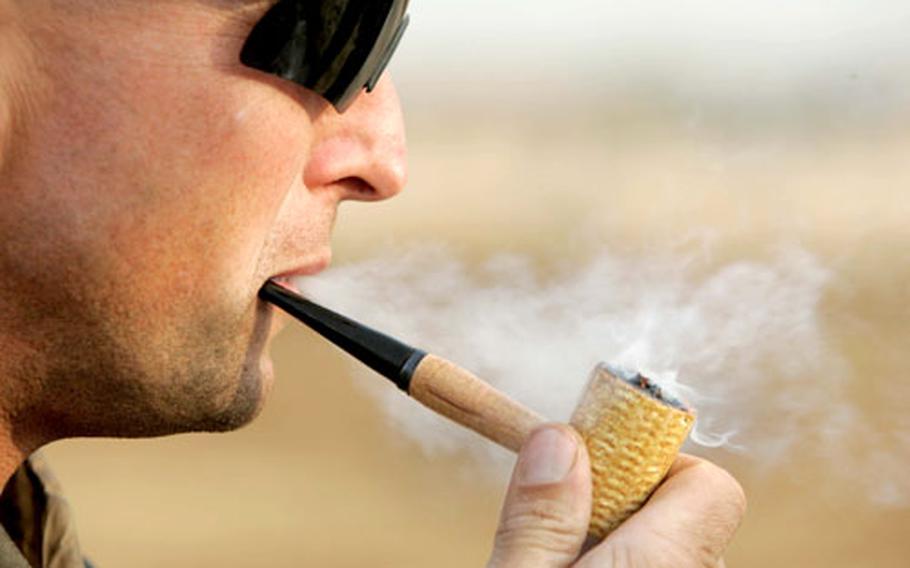 Gunnery Sgt. Michael Burghardt enjoys a pull on his corncob pipe Oct. 18 at Camp Ramadi, about a month after he was injured by an IED. (Jeff Bundy / Omaha (Neb.) World-Herald) 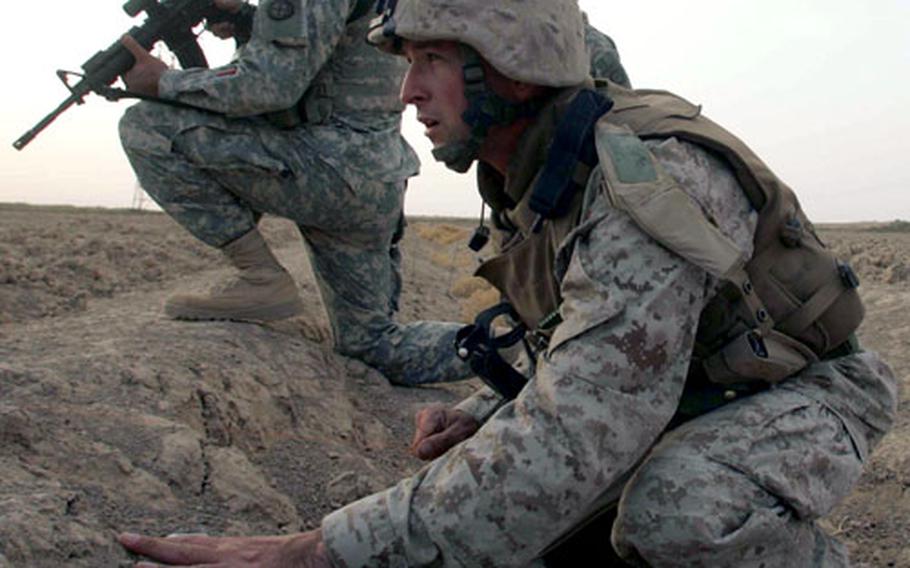 Gunnery Sgt. Michael Burghardt crouches down as Staff Sgt. George Goodon of Hastings, Neb., looks in the area of where gunfire was happening Oct. 18 near Ramadi. Burghardt was out in the field looking for wire running to an IED. (Jeff Bundy / Omaha (Neb.) World-Herald) 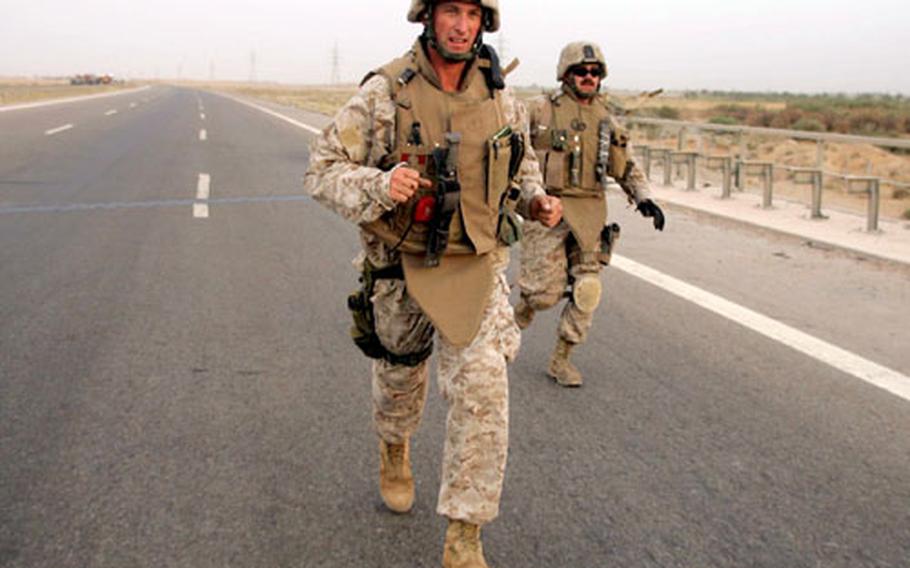 RAMADI, Iraq &#8212; For Marine Gunnery Sgt. Michael Burghardt, the business of hunting down and defusing roadside bombs is something of a deadly chess game.

Burghardt, 36, of Fountain Valley, Calif., is probably one of the best-known and most well-respected improvised bomb experts in Iraq, where his skills are in constant demand.

Last September, an embedded journalist snapped a photo of Burghardt moments after a roadside bomb exploded on him in a notoriously troubled corner of western Ramadi &#8212; a city that Burghardt describes as &#8220;the scariest place on Earth.&#8221; The image shows Burghardt with bloodied legs and shredded uniform, flipping the bird to an unseen insurgent who triggered the bomb.

The photo has circulated widely among military personnel in Iraq, who view it as a powerful symbol of resolve and fighting spirit.

Whether Burghardt is using a Mars rover-type robot or a knife blade to probe for bombs, or searching for them in a heavily armored Buffalo mine-clearing vehicle, his goal is to outmaneuver the fertile yet deadly imagination of the unseen bomb-maker and, he hopes, save the lives of fellow soldiers and Marines.

Now, with roughly two months remaining in his third Iraq tour, Burghardt shakes his head in wonder at the variety and evolution of the roadside bombs he has encountered and the relentlessness with which they&#8217;re planted.

Washing machine timers, cordless telephone docking stations, battery acid, shaped charges and artillery rounds seemingly scrounged from all corners of the globe are the insurgents&#8217; currently preferred tools. Yet Burghardt said it&#8217;s only a matter of time before they move on to newer and deadlier devices.

In the hierarchy of roadside bombers, Burghardt said insurgents are divided into three groups: those who plant bombs; those who design them; and those who finance the process.

The lowest rungs, those who plant the improvised explosive devices, or IEDs, are most likely doing it for financial reasons as opposed to any ideology, he said.

While roadside bombs remain the No. 1 killer of U.S. troops in Iraq, aggressive efforts at finding improvised explosive devices in and around Ramadi have reduced the number of attacks here from a September high of 45 a week to fewer than 15 currently, the U.S. military reports.

Burghardt earned the Bronze Star for disabling 64 roadside bombs and destroying more than 1,500 pieces of ordnance during his second Iraq tour.

But he and his fellow explosive ordnance disposal technicians do not always beat the bomb-makers and planters.

Already, five EOD technicians Burghardt has worked with have been killed, the most recent death occurring three weeks ago when the technician sunk his knife into a dirt berm and activated the pressure switch on a buried bomb.

&#8220;Pink mist,&#8221; Burghardt said gravely, using the term familiar to Marines to describe the aftermath of a person being blown up.

The day Burghardt found himself checkmated by a roadside bomber was Sept. 19. He was in Ramadi&#8217;s wild Tammim neighborhood as part of a team of bomb technicians responding to the scene of a chaotic ambush in which four U.S. personnel were killed.

Burghardt, who was looking to clear an evacuation route for the vehicles, hopped into what he thought was a recent bomb crater. He said he saw an interesting piece of shrapnel in the 4&#189;-foot- deep hole and wanted to investigate. As he took a closer look, the shattered gravel beneath his foot suddenly shifted, revealing a package wrapped in orange plastic and a cordless telephone base station.

Realizing that he had just stumbled onto a primed explosive, Burghardt stuck his knife in the dirt and dredged up a red detonating cord that led to a pair of 122 mm artillery shells. He cut the cord with scissors and told the rest of his team to stay back.

But what he didn&#8217;t realize was that a second detonating cord ran from the base station to a third artillery shell buried behind him. The triggerman, figuring perhaps that he wouldn&#8217;t lure anyone else into the trap that day, placed a telephone call to the base station.

The explosion sent Burghardt 10 feet into the air and dropped him in a heap on the road as his team watched in horror.

Burghardt could not feel his legs. Trying not to look below his waist &#8212; afraid of what he might see &#8212; he was struck by an image of his father. The retired Marine spent three tours in Vietnam, earning three Bronze Stars and three Purple Hearts by the time he was shot by a sniper and paralyzed from the waist down.

But relief came quickly. Burghardt was able to wiggle his toes.

Medics cut away his bloody pants to reveal that the backs of his legs had been studded with shrapnel and bruised from the top of his boots to his waist. As they prepared to place him in a stretcher, Burghardt shouted, &#8220;No.&#8221; He didn&#8217;t want his teammates or the insurgents to see him carried from the scene. He was going to walk.

As he was helped to his feet, Burghardt said, he felt a wave of anger and adrenaline flow through his system. He had just extended his Iraq tour that morning and he was livid that he had been bested by the bomber.

It was at this moment that photographer Jeff Bundy of the Omaha (Neb.) World-Herald snapped the photo that would be seen on office walls, refrigerators, screensavers, Web sites and newspapers throughout Iraq and the U.S.

Since then, Burghardt has had plenty of other experiences with exploding roadside bombs, but they&#8217;ve been from the relative safety of a heavily armored mine- clearing vehicle called a Buffalo.

The vehicle, which deactivates explosives using a long, hydraulic arm, is also outfitted with large ballistic glass windows that give occupants an up-close view of the explosives. Burghardt rides along with other technicians to give advice to the arm operator on how to deal with the explosives.

He describes the experience of riding in a Buffalo and getting close to bombs as something akin to visiting an &#8220;IED petting zoo.&#8221; The excitement of watching an explosive being dismantled &#8212; or of watching it explode in a fiery blast &#8212; from the protection of a Buffalo is beyond compare, Burghardt said.

&#8220;There will be no amusement park ride back in the States that can compare with the Buffalo,&#8221; he said. &#8220;You will never get a chance to get that close to an IED and feel all of those emotions, happiness, suspense, adrenaline.&#8221;

So far, Burghardt has seen at least 20 roadside bombs explode while riding in the Buffalo. Each time the vehicle rolls up to a suspected IED, Burghardt said, the emotions are the same. It&#8217;s back to the chess game.