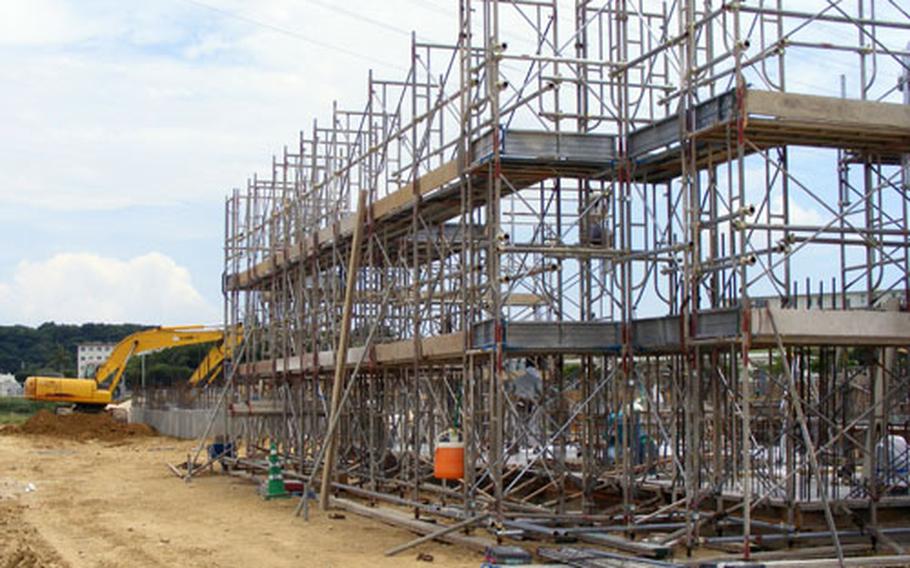 Constructon is in full swing on a new consolidated club on Camp Foster. The new facility will replace the Globe and Anchor Enlisted Club and Chesty&#39;s NCO Club. (David Allen / S&S)

Constructon is in full swing on a new consolidated club on Camp Foster. The new facility will replace the Globe and Anchor Enlisted Club and Chesty&#39;s NCO Club. (David Allen / S&S) 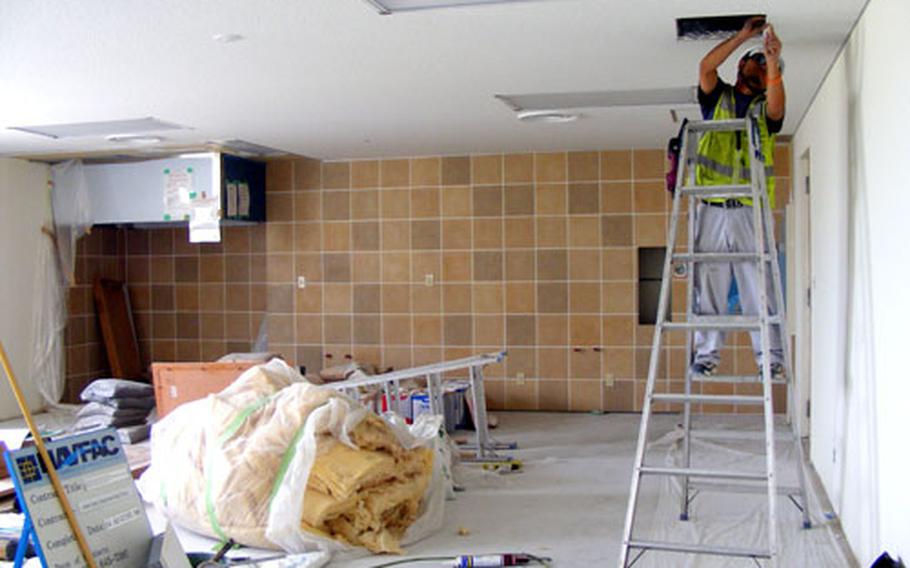 A worker puts the finishing touches on the ceiling of a new kitchenette on the second floor of Bachelor Enlisted Quarters, Building 473, on Camp Foster. (David Allen / S&S) Almost anywhere you look, gates are being reinforced, some buildings are being renovated and others are being razed to make way for something newer, larger, more modern.

On Camp Foster, all the entry gates are going through a $6.05 million security upgrade that should be complete by April, said Charles Schulz, Deputy Facilities Engineer for Marine Corps Bases Japan.

There&#8217;s also a $3.1 million renovation of the mess hall, $3.6 million refurbishing of an enlisted barracks and a $91,000 upgrade of another barracks that will be equipped with a kitchenette.

But the changes haven&#8217;t come easy. The East Chatan housing area, a $63 million enlisted family housing project, was completed over a year ago, but the 130 three-bedroom and the 30 two-bedroom units remain empty because of unforeseen problems with water pressure and air conditioning.

Schulz said those problems are being addressed and the first families will begin moving into the new housing area, behind the base exchange complex, next month.

But it might be another month or so before they have adequate cable TV and Internet hook-ups, Schulz said. The cable is still being installed.

Additional housing projects on Camp Foster include a $45 million project to build 56 new housing units in the Futenma Housing area, adjacent to the area set aside for a new hospital, and 44 units at Plaza Housing.

The new housing is part of the 1996 Special Action Committee on Okinawa plan to reduce the U.S. military&#8217;s footprint on Okinawa. Schulz said 1,770 housing units were to be relocated to replace housing on Camp Lester, which is slated for return to Japan.

Many of those units have been replaced by apartment towers and multi-family units on Camp Foster. But future construction, including replacement of some housing units in the Kishaba Housing area that are 50 to 60 years old, are on hold because of the 2006 bilateral agreement to realign U.S. troops in Japan.

That plan calls for closing Marine Corps Air Station Futenma and replacing it with a new air facility on Camp Schwab and moving some 8,000 Marines and their families to Guam by 2014.

That would eventually lead to the closing of Camp Kinser, MCAS Futenma and part of Camp Foster along Highway 58. However, the project is on hold pending discussions among Tokyo, Okinawa and the U.S. on details of the airport project.

Construction of a new hospital to replace the U.S. Naval Hospital on Camp Lester has been delayed because a survey of cultural assets turned up important artifacts dating back to Okinawa&#8217;s earliest settlements. The hospital is expected to be completed by mid-2011 with other units, including an alcohol rehab center, a blood bank and recreational facilities to be built later.

The move of the hospital to Camp Foster will allow for the final phase of closing Camp Lester.

The other major construction project on Camp Foster is the new $15 million consolidated enlisted and senior NCO club where Chesty&#8217;s used to be. It is scheduled for completion in February.

On other Marine bases ...

Major construction projects in the works on other Okinawa Marine bases include:

Camp Courtney: A $2.8 million renovation of the theater; a $2.8 million renovation of a bachelor officers quarters; and $650,000 renovation of a sewage treatment plant.Camp Hansen: Relocation of the Army Training Range Complex, $4.3 million; a $2 million pistol range; an upgrade of another range, $1.8 million; a new $2 million water tank; a $5.4 million sewage treatment facility upgrade and $15 million for a new consolidated issue facility.Camp Schwab: Construction began in June on five buildings that will replace existing structures to make room for an airfield to replace MCAS Futenma. The move of Marine air operations on Okinawa to Camp Schwab is eventually expected to cost between $4 billion and $5 billion.Another project on the drawing board is a $5.3 million plan to move a Marine Corps Community Services maintenance complex from Camp Foster to Camp Hansen.