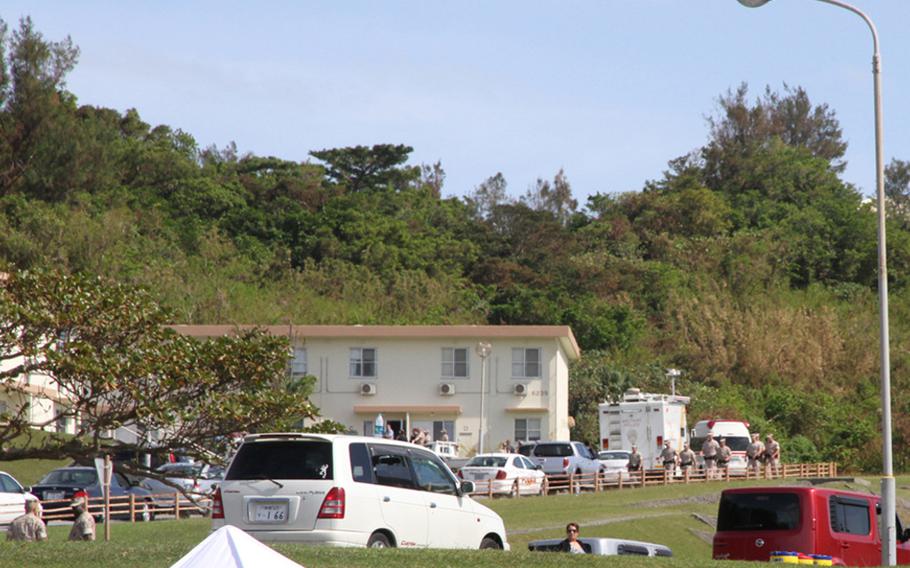 An ambulance arrives on the scene at just after 1 p.m. Thursday as a standoff on Okinawa's Camp Lester housing area came to a peaceful end. The ambulance, which is surrounded by military police officers, left the scene several minutes later without its lights flashing. A lone Marine had allegedly barricaded himself in his home Thursday morning. Nearby residents say the Marine was in possession of an M-16 rifle. (Matthew M. Burke/Stars and Stripes)

Residents said they were evacuated early Thursday from the isolated cluster of military housing on a hill in the rear of the Marines base and had been told the man had an M-16 rifle.

The scene was secured by emergency personnel and MPs so there was no danger to nearby homes, neighboring residents or the Camp Lester middle school, which observed normal class hours, Marine officials said.

About a dozen more MPs arrived later as spectators gathered across the street, which was closed off to non-residents. Toward the end of the standoff, law enforcement officials approached the house on the back of a truck, carrying rifles and wearing body armor and helmets.

A Marine Corps statement said the situation was safely de-escalated by 1 p.m. and the Marine was walked outside.