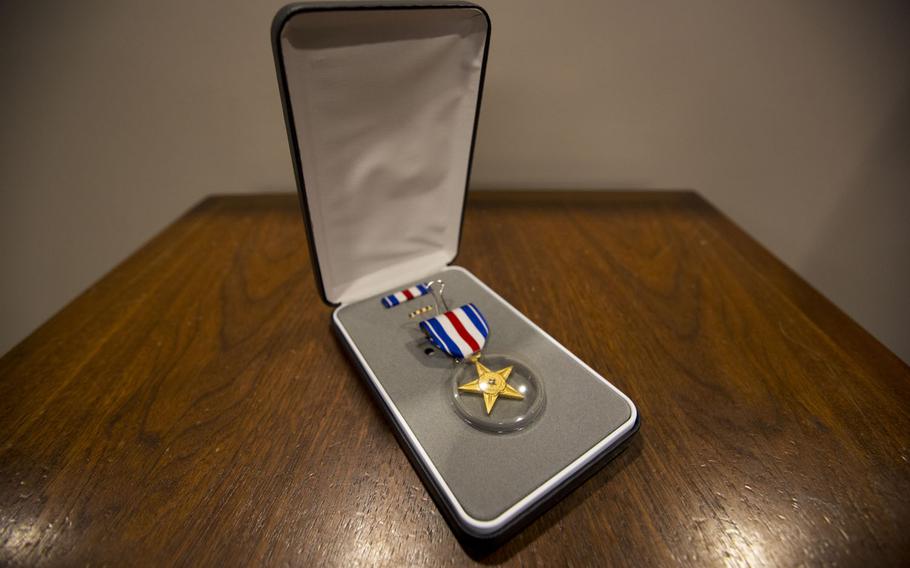 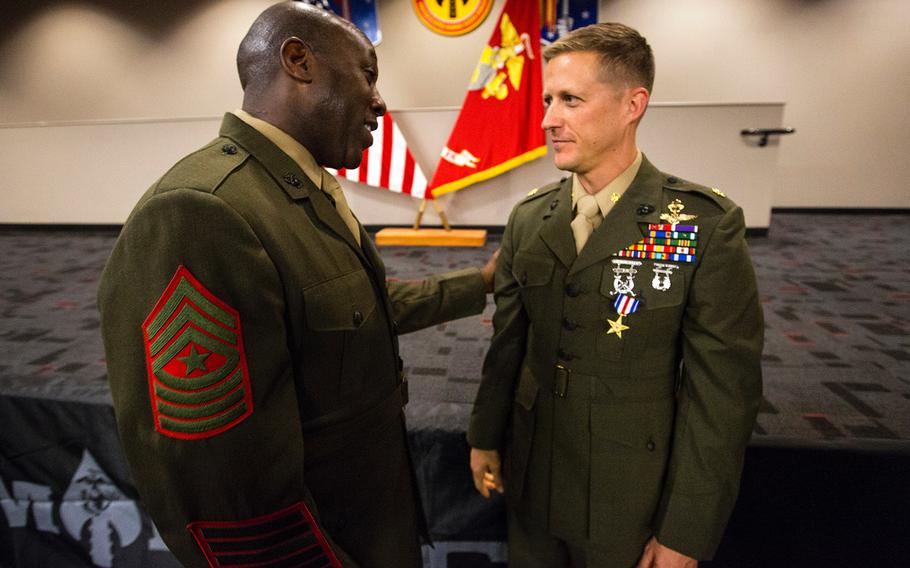 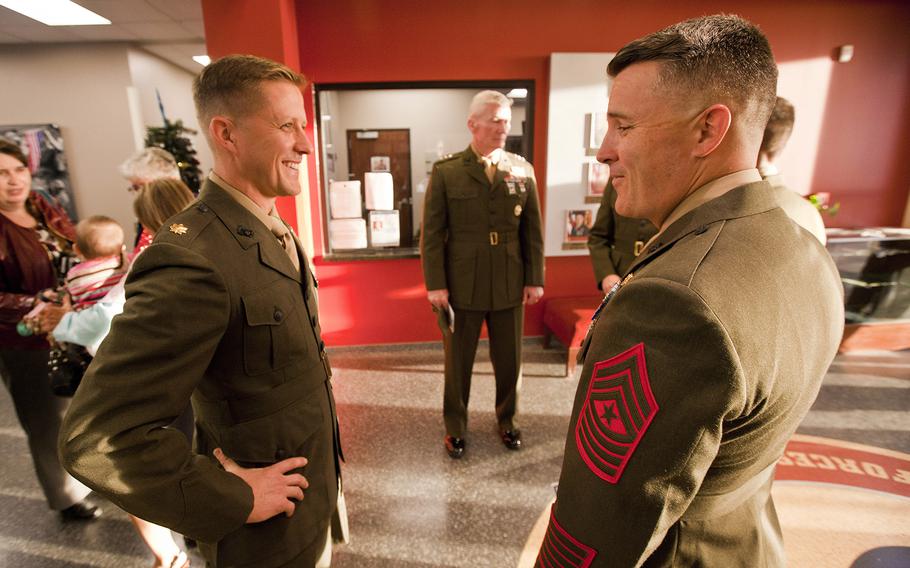 Maj. Robb McDonald speaks with a fellow Marine during a ceremony at Camp Pendleton, Calif., where he received the Silver Star for his efforts against an enemy attack at Camp Bastion, Afghanistan in 2012. (U.S. Marines) 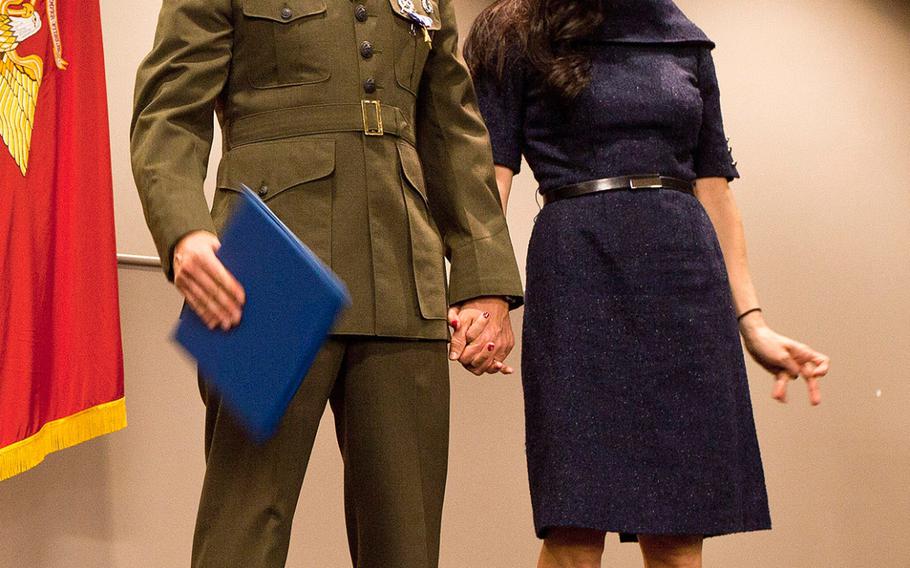 Maj. Robb McDonald stands with his wife, Jennifer, during a ceremony Dec. 9, 2013, at Camp Pendleton, Calif., where the Marine Corps officer received the Silver Star for his efforts against an enemy attack aboard Camp Bastion, Afghanistan in 2012. (U.S. Marines)

SAN DIEGO — Maj. Robb McDonald was asleep more than a mile from the Camp Bastion airfield when 15 heavily armed Taliban fighters in U.S. Army uniforms cut through a fence and began attacking the squadron operations area. He was awoken by explosions and gunfire and ran to where the rest of the squadron was holed up.

But instead of staying in the relative safety of the living area, McDonald ran to the airfield to fight.

On Monday, McDonald was awarded the Silver Star for his bravery and leadership in the attack, which killed two Marines, wounded eight and destroyed six Harrier jets.

McDonald, now the air officer for 1st Marine Special Operations Battalion, had taken over as the executive officer of Marine Attack Squadron 211 a few days before the Sept. 14, 2012, attack. He said that when he woke up and went to a balcony, he saw fires engulfing the east side of the airfield.

Though McDonald is a Harrier pilot, he had ground combat experience in Afghanistan with a Marine Special Operations Command unit. He ran downstairs to the area where the rest of the squadron was staying, then he and two other Marines began their dangerous run to the Harrier line.

Armed only with pistols, the men had to be wary of possible friendly fire as they bound from squadron to squadron for more than a mile, running toward the explosions. McDonald said he could see that multiple jets were on fire.

The men arrived at the thin-skinned aluminum maintenance building, which was riddled with holes, and found that the commander of their squadron, Lt. Col. Christopher Raible, was dead and that several other Marines were wounded.

McDonald led the Marines six at a time over about 100 yards of open ground to their headquarters building, which was reinforced with concrete barriers. Then, he said, he borrowed a rifle and extra magazines and moved toward the flight line with three other men.

McDonald soon found himself looking at four Taliban fighters in a line, with the first looking directly at him, holding a machine gun. McDonald shot that man, then shot at the other three, knocking them down.

After a brief firefight in which McDonald took some shrapnel in the face, he and the other Marines went back to the headquarters building and called in an airstrike on the remaining fighters, he said. Later, when the quick reaction force arrived, McDonald killed another Taliban fighter who was attempting to use his grenade.

McDonald said he is very honored to receive the Silver Star, but that it “was a collaborative effort that night.”

McDonald was close friends with Raible, and knew his wife and children. He said the commander’s death “hit pretty hard,” and that he would “definitely give this thing back” if it could help Raible.

At the awards ceremony, I Marine Expeditionary Force Commander Lt. Gen. John Toolan praised McDonald and the other Marines who helped defeat the enemy fighters that night.

“For those of you that aren’t aware of the fact that every Marine is a basic rifleman, those guys proved it in spades on that particular day,” Toolan said.

In September — a year after the attack — two major generals were fired for failing to protect their troops from the Taliban attackers. Maj. Gen. Charles Gurganus was the commander of Regional Command-Southwest at the time of the attack, and Maj. Gen. Gregg Sturdevant was the Marine aviation commander in the area. The base was being guarded by Tongan troops.

“In the final analysis, every Marine is a rifleman, and every Marine commander must properly position his command and his Marines to both successfully accomplish the mission and defend itself in any clime and place,” Commandant Gen. James Amos wrote in a statement endorsing the investigation of the attack.

“We owe this duty to the courageous Marines like Lt. Col. Raible and Sgt. Atwell, who so faithfully served our Corps,” Amos said.