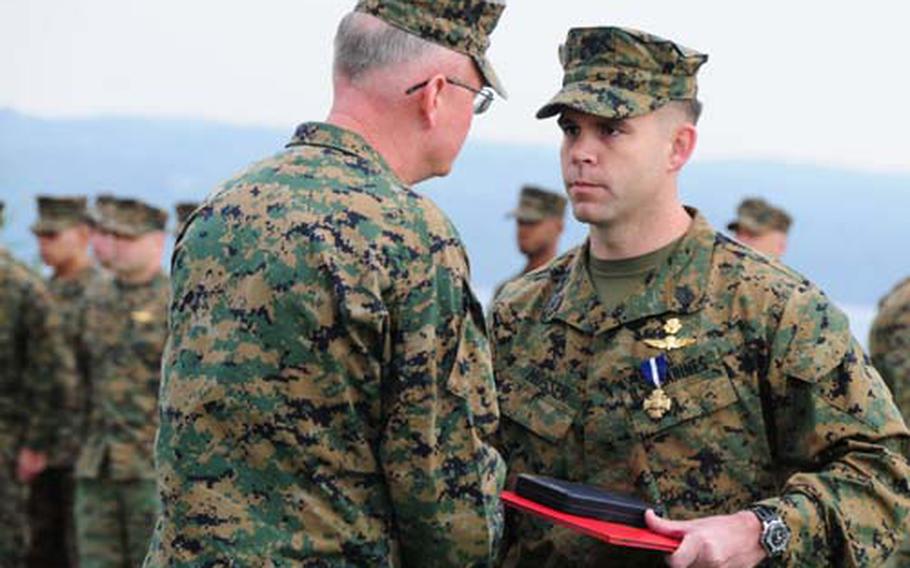 Gunnery Sgt. John Mosser, right, is congratulated by Gen. James B. Laster, the commanding general of 3rd Marine Division, after receiving the Navy Cross on Friday. Mosser was awarded the medal for actions when he and his reconnaissance team were ambushed and pinned down by heavy small-arms fire in June in Afghanistan. The Navy Cross is the second highest military award for valor. (Matt Orr / S&S)

In a ceremony at Recon Point, Gunnery Sgt. John Mosser was awarded the Navy Cross medal for his actions during a deadly battle in Afghanistan in June.

Strelkauskas was Mosser&#8217;s team leader during that firefight in Afghanistan and has received the Silver Star for his part in the battle. The two of them were leading a team of more than 20 Marines of Company H, 2nd Marine Special Operations Battalion, when the small unit was attacked.

Gen. James B. Laster, commanding general of 3rd Marine Division, also was present for the ceremony.

Mosser was the team sergeant of the Marine patrol that was pinned down by heavy sniper and automatic-weapons fire in a small valley on June 26.

Mosser&#8217;s Navy Cross citation said the gunnery sergeant&#8217;s reaction was gallant, that he helped save Marines during the bloody battle.

&#8220;He single-handedly dragged the wounded Marine over 35 feet to a covered position and administered first aid,&#8221; the citation said in part, describing one of Mosser&#8217;s heroics during the firefight. &#8220;With the entire patrol desperately pinned down, one Marine killed, and five more severely wounded, he devised a plan to break contact and extract his team.&#8221;

He then called for and adjusted close air support, dragged that wounded Marine a second time to safety and directed the Marines still in the fight.

Continually exposing himself to enemy fire, he maneuvered the remaining members of his team still trapped in the ambush, all the time constantly engaging the enemy until everyone was safe.

Strelkauskas said the gunny was humble.