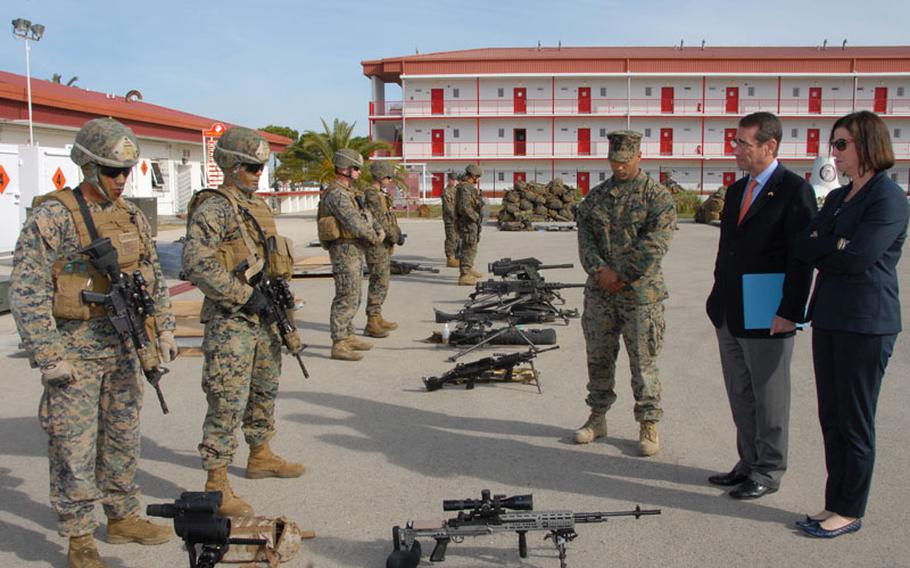 Marines assigned to Fleet Antiterrorism Security Team Company Europe brief U.S. ambassador to Spain and Andorra Alan Solomont on some of the weapons that are used while deployed during a visit to Naval Station Rota, Spain in this March 2012 photo. (Travis Alston/U.S. Navy)

WASHINGTON &mdash; A Marine anti-terrorism team based in Rota, Spain, is on the ground in Tripoli to beef up security at the U.S. Embassy in Libya after the killings of U.S. diplomats in Benghazi, officials said Wednesday.

The team is known as a Fleet Antiterrorism Support Team, or FAST team, and includes about 50 Marines trained in crisis response operations. Such teams were previously dispatched to Liberia in 2003 and Haiti in 2004 when conflicts in those nations threatened U.S. citizens.

&ldquo;The mission of this team is to secure the diplomatic facility in Tripoli, our embassy, and protect U.S. citizens as needed,&rdquo; a senior administration official speaking on the condition of anonymity said Wednesday.

The U.S. ambassador to Libya, J. Christopher Stevens, died Tuesday under uncertain circumstances during an attack by militants on the U.S. Consulate in Benghazi. According to a second senior administration official, he either left or was taken from the burning consulate to a Benghazi hospital, and his body was later delivered to U.S. personnel at Benghazi Airport as they evacuated the city.

Also Tuesday, a mob attacked the U.S. Embassy in Egypt and burned the U.S. flag there. Both attacks reportedly were carried out during protests over a film, originating in the U.S. and portions of which were posted on YouTube, that mocked Islam and the Prophet Muhammad.

According to the first senior official, Chairman of the Joint Chiefs of Staff Gen. Martin Dempsey on Wednesday called Terry Jones, a Quran-burning Florida pastor who sparked riots in the Middle East in 2010 and 2011, to persuade him to disavow the film, which Jones has been promoting. But Jones was noncommittal, the official said.

Additionally, the U.S. was sending surveillance drones to Benghazi and elsewhere in eastern Libya to monitor for signs of terrorist activity, and hand over intelligence from the flights to the Libyan authorities to take action, according to a report by CNN, citing a senior U.S. official.

No U.S. servicemembers were stationed at the Benghazi consulate when militants gained access to the compound and began a several-hour-long nighttime battle&cedil; the second senior administration official said. U.S. diplomatic security forces, working with Libyan troops, finally regained control of the compound, the official said.