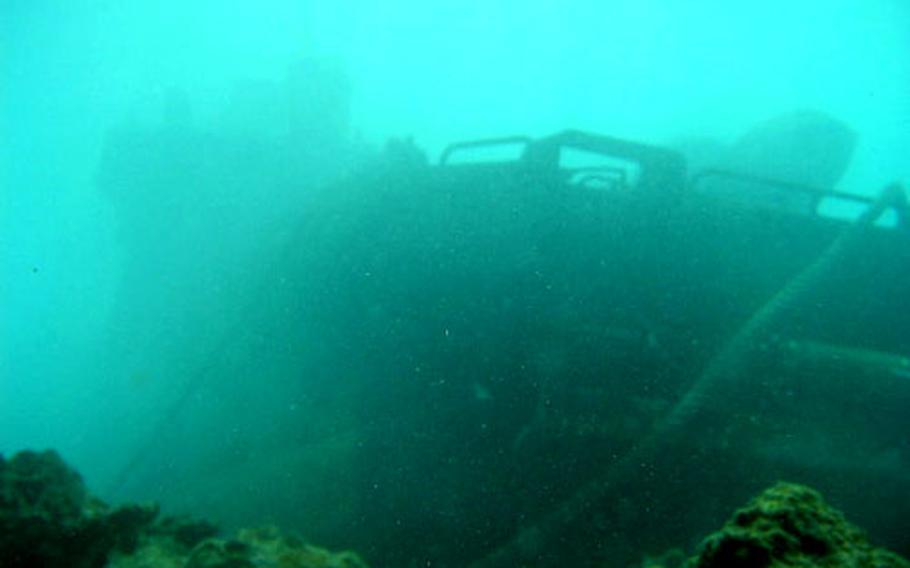 A Marine Corps amphibious assault vehicle that sank off the coast of Camp Schwab, Okinawa, on Thursday, is shown Friday sitting under approximately 10 feet of water. (Courtesy of The Anti-Heliport Council)

The release, sent out Friday morning, stated the AAV sank in about 10 feet of water. The four crewmembers evacuated the vehicle, but two suffered minor injuries and were treated at the Camp Schwab Regimental Aid Station and released, according to the news release.

The release apologized for &#8220;any anxiety this may have caused the residents of Okinawa&#8221; and said the sinking is under investigation.

The release also stated that the AAV&#8217;s unit, which was not named, was making preparations on Friday to recover the vehicle.

Some Henoko residents, however, voiced concerns that a recovery might further damage coral in the area.

Sakae Toyama of the Anti-Heliport Council, one of the groups protesting a planned military airport off the shore of Henoko, said some of the group&#8217;s members went to the site to see the submerged vehicle.

&#8220;There was a trace where the vehicle tried to change its course. The surface of the corals, about 20 to 30 square meters (215 square feet to 323 square feet) was damaged,&#8221; he said. &#8220;The hole where the vehicle is sitting is one of the seven access holes through which dugongs come to the feeding grounds.

Meanwhile, the Defense Facilities Administration (DFAB) Naha Bureau expressed concern over the accident. The agency filed requests on Thursday with the Marine Corps on Okinawa for early investigation of the cause of the accident and demanded the prevention of similar accidents. The agency also requested early recovery of the vehicle, according to a spokesman.

A Japan coast guard spokesman in Naha said the agency sent a patrol boat to the site after it was informed of the accident by DFAB Naha.