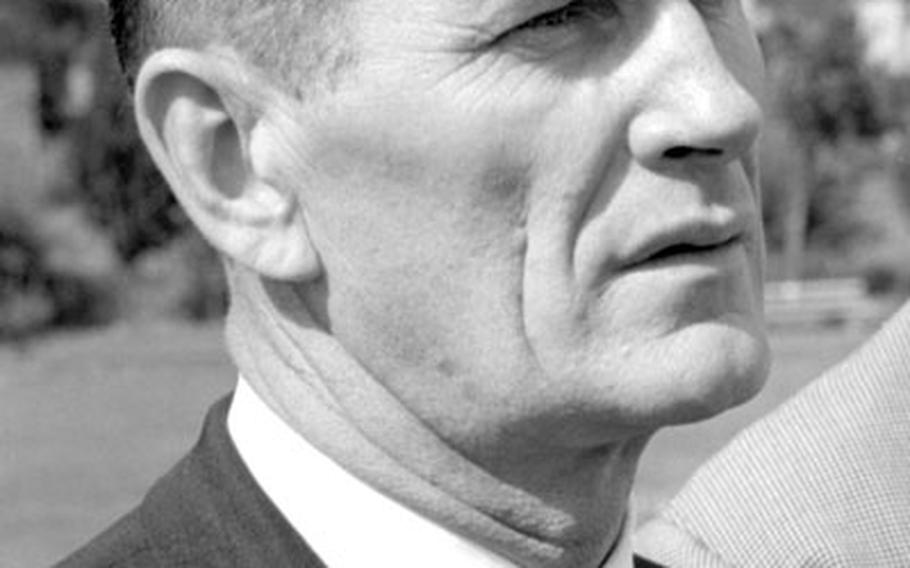 WIESBADEN, Germany (S&S) — Joe Foss, chairman of the board of the Air Force Association, met the press early this week in a suite at the General Von Steuben hotel here.

He was addressed variously as "Governor;" as "General," even as "Commissioner."

The World War II Marine fighter ace and Congressional Medal of Honor winner is entitled to all. He has twice been governor of South Dakota; is a brigadier general in its Air National Guard, and is commissioner of the American Football League.

Within a few minutes of introduction, he was simply "Joe."

Foss arrived In Europe on Sunday and plans to remain through Aug. 22. His mission? "To beat the drum for Air Force Association membership."

AFA membership is now open lo anyone interested in associating themselves with air power and aerospace progress. Until this year members bad to have a military affiliation, either as veteran, reservist or active.

High on the AFA program at this moment is a bid to get military salaries reviewed and adjusted on an annual basis, as are the Civil Service ones.

Foss personally testified before a Senate subcommittee hearing on the current pay bill. White satisfied with its current structure, he feels the annual review more in keeping with the demands of economy.

It is just good dollar-sense, he maintains, to keep a man on the job once you've trained him for it, and to give him a fair compensation. To achieve this, Foss also advocates greater emphasis on specialty pay for all ranks.

Foss, who has been an active AFA member since it was organized at the end of World War II, has always been a champion of dollar-sense.

As far back as 1948, when drastic reduction in flying time was being considered as an economic measure, Foss argued dollar-sense. It didn't make dollar-sense to him to limit pilot and machine use — the machine would be effective only to the extent of the pilot's knowledge of it.

During one of the sessions on this subject, Foss was asked by Louis Johnson, then secretary of defense, "Joe, what are you doing here?"

Foss replied with an alacrity that still amuses him, "Well, I'm here as an interested taxpayer."

On Monday afternoon, Foss and Adolf Krogmann, president of the German Luftfahrt club, placed wreaths at the Geisenheim Jagdflieger memorial — dedicated to fighter pilots of all nations and of all wars.