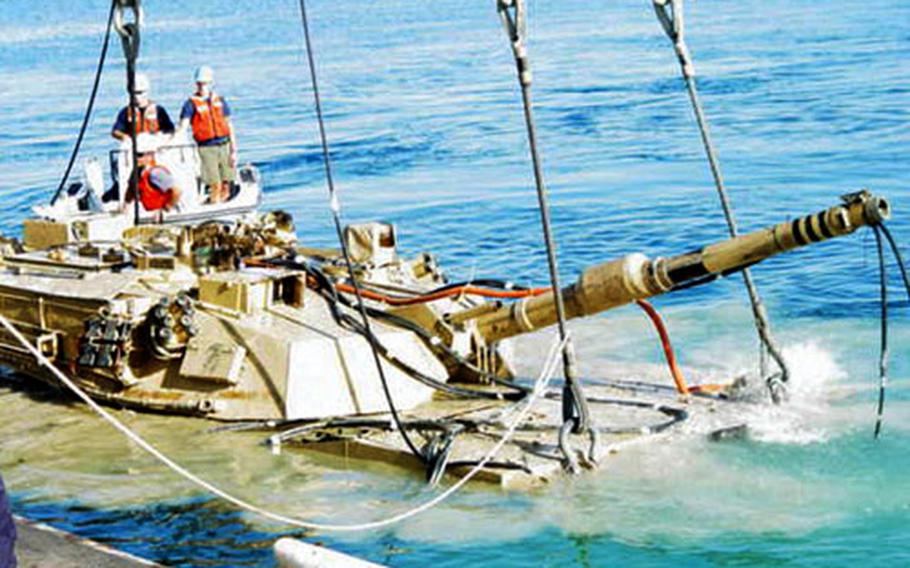 An M1A1 Abrams battle tank that sank to the bottom of Guam’s Apra Harbor is lifted after three weeks of preparations. The tank fell off a U.S. Navy Landing Craft Air Cushioned hovercraft on Feb. 17. (Courtesy of U.S. Navy)

A battle tank that slid off a hovercraft Feb. 17, leading to a Marine&#8217;s drowning death, has been recovered from the bottom of Guam&#8217;s Apra Harbor.

&#8220;The personnel who performed this task were all from right here, and no additional assistance from the West Coast, Hawaii or Japan had to be dispatched here to conduct the recovery,&#8221; she said Friday. &#8220;Our executive officer made the point about the importance of not having to request assistance, which is that it could have been quite costly.&#8221; The local recovery also allowed the investigation of the mishap to proceed more quickly, she said.

Cpl. Adam S. Lipford, 22, of Madisonville, La., was in the tank when it fell into the harbor. He was pronounced dead at U.S. Navy Hospital Guam late that afternoon. Consaul said Monday afternoon that Chief Petty Officer Jonathan Annis, acting public affairs officer during the incident, said, &#8220;The cause of the accident is still under investigation.&#8221;

After the February incident, the Mishap Investigative Board immediately instructed the Marianas command to salvage the tank.

Cmdr. Jeff Beaty, executive officer at Naval Forces Support Activity Marianas, said the operation &#8220;took three weeks of preparation, but it only took only one day to lift the tank.&#8221;

Marine, Guam Shipyard, Port Operations and Navy divers were involved in the operation, Consaul said. It took about six hours to rig the gear to lift the armored vehicle, she noted.

&#8220;We took a very big job with a high and difficult profile,&#8221; Beaty said. &#8220;It was an accomplishment that was above and beyond.&#8221; Although Commander, Naval Forces Marianas controlled the project, the command&#8217;s dive locker coordinated the bulk of the smoothly executed recovery, Beaty added.

At times, the divers barely could see while working with the tank on the harbor floor, a base news report stated.

Other elements of the recovery included hoses attached to the top of the tank prior to the lift; personnel connected them to vacuums that drained water from the tank, he added. Also, Pratschner said, diffusers underneath the tank vibrated the tank, loosening it from mud on the harbor bottom.

Even so, Consaul said, that a fellow servicemember died in the mishap is a somber reality.