March in eastern Belgium to salute historic Battle of the Bulge 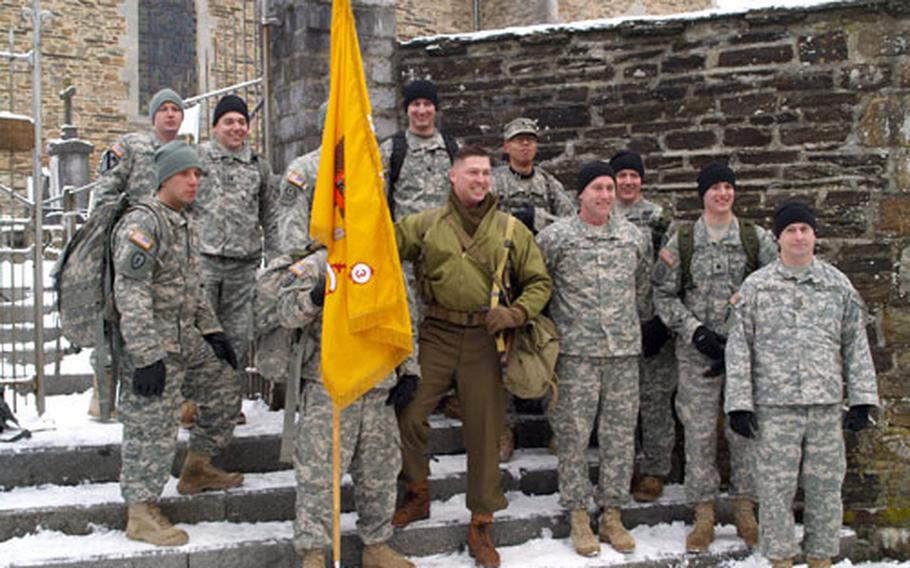 KAISERSLAUTERN, Germany &#8212; The Ardennes Forest in eastern Belgium can be a cold, damp place in February.

But for more than two decades, servicemembers, World War II re-enactors and regular folks have endured the elements once a year to commemorate the 82nd Airborne Division and its role in the Battle of the Bulge during the winter of 1944-45.

Similar to the march in Bastogne each December that honors the 101st Airborne Division, this hike doesn&#8217;t draw anywhere near the attention.

Still, for the past few years upwards of 1,000 people, mostly Belgians and Americans, head for the southern tip of Li&#232;ge province, near towns such as Malm&#233;dy, Stavelot and Trois-Ponts.

"It&#8217;s a great way to get our guys out doing something that is physically challenging and historically significant to our Army," said Army Lt. Col. Bryan Denny, commander of the 3rd Squadron, 2nd Stryker Cavalry Regiment in Vilseck, Germany. "It puts a different perspective on the fight."

Perspective is what this annual commemoration is all about. This year&#8217;s route once again tackles some of the roads and trails traversed by 82nd Airborne units during the legendary World War II battle, the largest in Army history. The particular focus is on the area where 504th Parachute Infantry Regiment fought.

The march is scheduled for Feb. 20, starting at the village of La Gleize north of Trois-Ponts. The 14-mile trek starts at 9 a.m., taking participants through the villages of Brume, Rahier, Cheneux and La Vaux Renard before looping back to the start. The first section overlaps part of the escape route taken by hundreds German SS troops, said Emile Lacroix, the event founder.

The 6-euro entry fee covers logistical support, such as medical services, as well as a souvenir certificate, lunch and hot wine at the finish line. The walk typically takes about five hours.

At least a few World War II veterans are planning to attend this year&#8217;s event, according to Lacroix.

Denny also plans to be on hand. He brought 15 soldiers with him last year and some of them want to return before the regiment leaves this summer for a yearlong deployment to Afghanistan.

"There is no shortage of guys who want to go," Denny said.

For more information on the walk, visit http://82ndairbornemarch2010.blogspot.com/