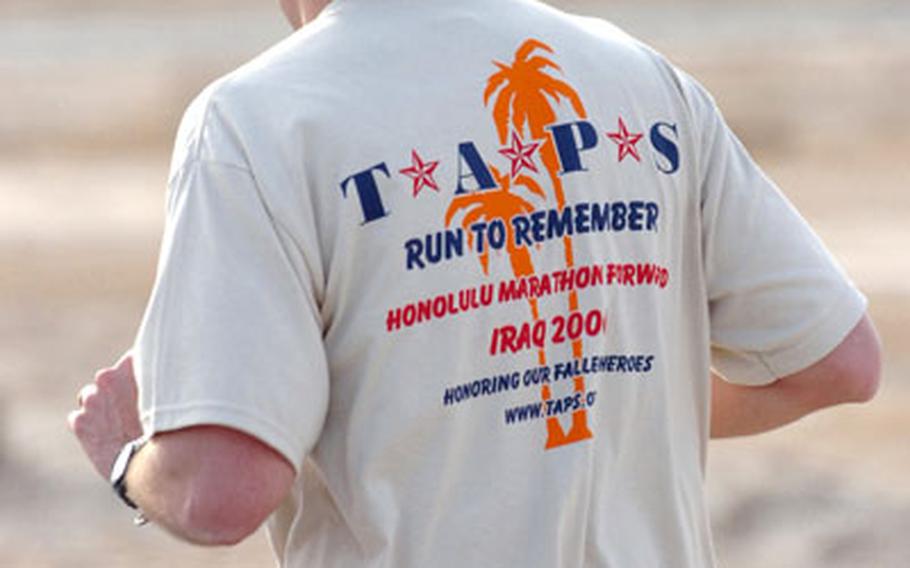 Some runners in the Honolulu Marathon in Iraq raced to raise funds for the Tragedy Assistance Program for Survivors (TAPS), which provides services for surviving family members of slain troops. (Daniel Bearl / Courtesy of U.S. Army)

Participants in the Iraq version of the Honolulu Marathon raised $23,000 in donations for an organization helping families of servicemembers killed in combat.

The money will benefit the Tragedy Assistance Program for Survivors (TAPS), which provides services such as peer support, counseling and education help.

Information about the program, along with a list of the runners and the fallen servicemembers they represented, is available at http://www.taps.org/ marathon/honolulu.aspx.

The race was held Dec. 10 and many of those who participated are part of the 25th Infantry Division, which is deployed from Hawaii.

&#8220;This is my first deployment and everything, and I can only imagine what the family has gone through losing someone so close to them,&#8221; Carpenter said in a military news release. &#8220;Just to be able to run in his name means a lot.&#8221;

Some of the families helped by TAPS wrote to the runners.

&#8220;TAPS has helped our family in so many ways that I cannot begin to tell you the feeling of family that is given to survivors.&#8221;