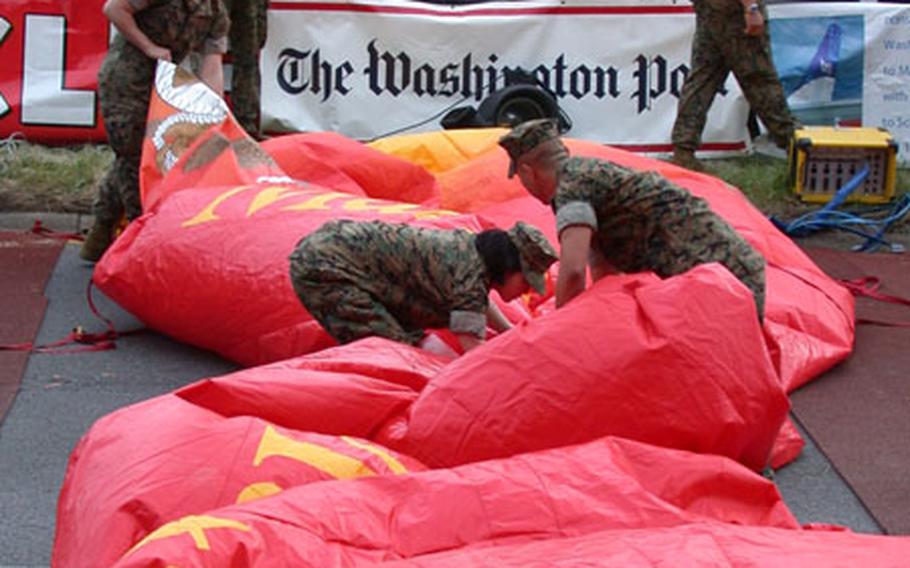 U.S. Marine volunteers from Marine Corps Base Quantico begin to fold up the "start" arc after the last of the runners left the start line for the 28th Marine Corps Marathon, held Sunday in and around the nation&#39;s capital. (Sandra Jontz / S&S)

U.S. Marine volunteers from Marine Corps Base Quantico begin to fold up the "start" arc after the last of the runners left the start line for the 28th Marine Corps Marathon, held Sunday in and around the nation&#39;s capital. (Sandra Jontz / S&S) 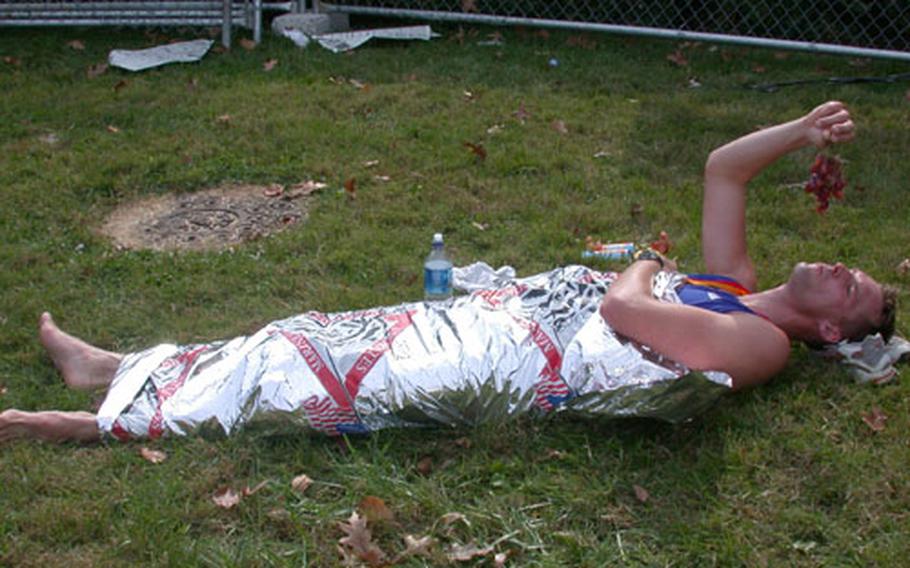 Tilo Segert, 28, with the German Navy in Rostock, Germany, feeds himself purple grapes and attempts to relax Sunday after running in the 28th Marine Corps Marathon in and around Washington, D.C. Segert said he was disappointed in his attempt, wanting to have completed the race in less than 3 hours. He ran it in 03:01:09. (Sandra Jontz / S&S)

ARLINGTON, Va. &#8212; Heather Hanscom, 25, not only ran her first-ever marathon Sunday, but the novice also finished as the top female runner.

Elated, she made her No. 1 mission upon finishing the 26.2-mile run in the 28th Marine Corps Marathon to find a Stars and Stripes reporter, who could deliver a personal message to her father, Richard Hanscom, a civilian working in South Korea, and who would be scanning the paper the next day for any news.

More than 18,000 runners gathered Sunday in the unseasonably warm and humid Washington, D.C., area fall day to run the marathon, enduring blistered feet, cramps and, for some, a dose of humility when things didn&#8217;t go as hoped.

But for some, there were surprises.

Like for Peter Sherry, 35, who thought it was all but over around the eighth mile into the 26.2-mile run. &#8220;I had a cramp and thought I was going to have to drop out. But then I started feeling better and better, and kept plugging away.&#8221;

He ended up winning.

Unlike other marathons, there is no cash prize at the end of the Marine Corps Marathon, dubbed &#8220;The People&#8217;s Marathon&#8221; because just about anyone can sign up to compete and there are no qualifying times, just a registration deadline.

Army Maj. Jacqueline Chen, a podiatrist at Landstuhl Regional Medical Center in Germany, summed up her efforts in the Marine Corps Marathon on Sunday with two short words.

Sometimes, she comes up with an answer, said the intelligence officer for the amphibious ship USS Nassau in Norfolk, Va.

&#8220;You forget about the pain and it becomes about camaraderie and a great feeling of personal satisfaction.&#8221;