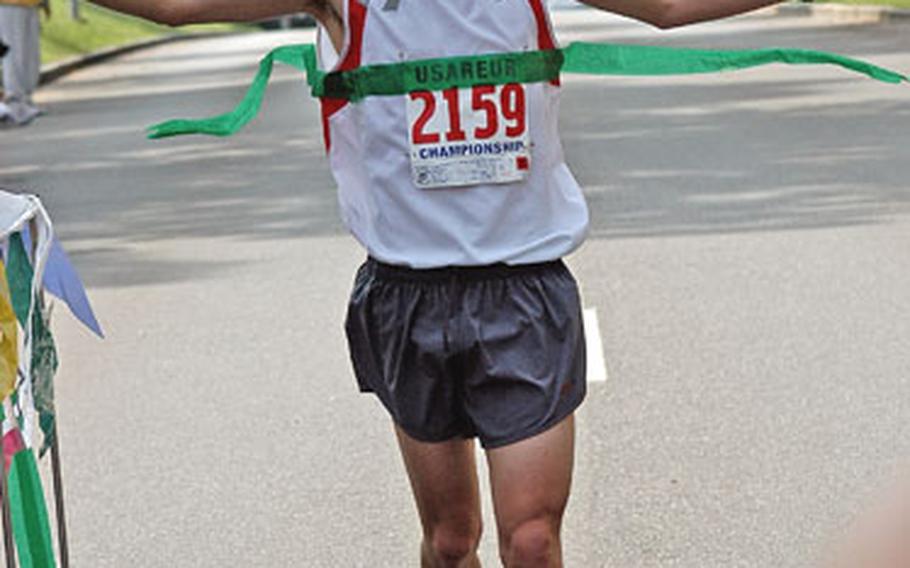 If Spc. Edmond Chapa — shown in Grafenwöhr, Germany, in July — qualifies for the U.S. Olympic Trials when he runs the Rotterdam Marathon on April 9 in the Netherlands, he will also qualify for the military’s World Class Athlete Program. If he fails, he’ll join his platoon on its yearlong deployment to the Middle East. (Courtesy of Sue Bluhm)

Training to run a marathon requires many lonely hours on the road and a lot of self-motivation.

For Sgt. Edmond Chapa, that motivation comes in the form of a 12-month trip to the desert staring him in the face.

When the Baumholder, Germany-based soldier, who is also the Army-Europe 10-miler champion, runs the Rotterdam Marathon on April 9 in the Netherlands, he will be trying to meet the Olympic trials standard of 2 hours, 22 minutes.

The 26-year-old 1st Armored Division soldier is currently training in Port Isabel, Texas, where he says he is trying to deal with the mental stresses of coping with his virtually all-or-nothing bid in Rotterdam. Chapa, a former distance runner at North Texas University, said he&#8217;ll have to run at a 5:25-per-mile pace for 26 miles, 385 yards, to make the trials. And he&#8217;ll have to do it while competing in a field of 20,000 runners that will include some of the world&#8217;s best marathoners.

Chapa, however, said it&#8217;s not the Colorado Springs-or-Operation Iraqi Freedom outcome that is making him nervous: It&#8217;s his lifelong dream of making the Olympic trials.

But while Chapa is nervous, his comrades in Baumholder are enthusiastic about his prospects.

Chapa, a 105-pound bundle of endurance, has been putting in the extra miles lately. He has qualified for the eight-man All-Army cross country team and ran in the International Military Sports Council championships this month in Tunis, Tunisia.

And he hasn&#8217;t been training alone: Fellow All-Army runner Nathan Pennington of SHAPE, Belgium, was with him in Tunisia. He&#8217;ll also run in Rotterdam.

Chapa said his 3-year-old son also provided a push in the snow.