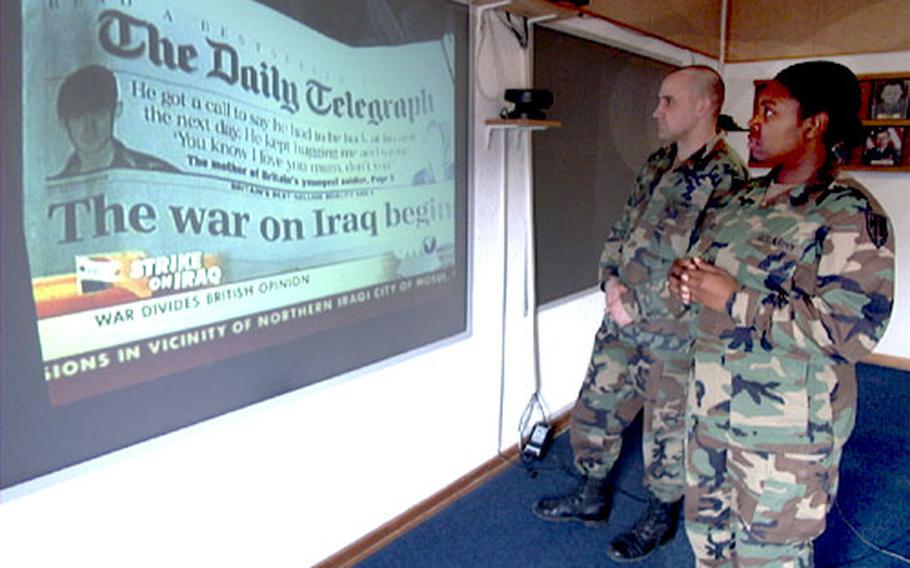 HEIDELBERG, Germany &#8212; While many V Corps troops head the charge across Iraq, fellow soldiers in the rear find themselves feeling frustrated and guilty as they watch the war on a TV screen.

Still, they attack their daily duties, knowing that their jobs are just as essential to the Army&#8217;s success, they said.

Taking command of V Corps artillery&#8217;s rear detachment was difficult for Capt. Tim Schroeder, he said. He wanted to deploy.

Schroeder&#8217;s troops, which number less than a dozen on duty, carry on with basic soldier tasks.

In February, V Corps artillery troops thought they were deploying to Kuwait for a training exercise. The day they left, wartime deployment orders for the unit arrived. The 40 remaining soldiers left in the rear prepared 15 trucks and packaged tons of supplies for shipment.

When force protection measures increased on Tompkins Barracks in Schwetzingen, forcing drivers to park their cars on the opposite end of post, Schroeder devised a vehicle pass system for pregnant wives to drive through the base. Last week, his troops started running a shuttle to ferry people from the far-off parking lot.

Caring for the families of deployed soldiers is one of the rear detachment&#8217;s highest priorities, Schroeder said.

In the headquarters, Schroeder&#8217;s troops created a space for families to get information and relax. Dubbed the yellow ribbon room, families can access the Internet and e-mail or pick up leaflets with community information.

Schroeder&#8217;s detachment also sponsors incoming troops such as Spc. Jerry Claussen, 20, of Houston, who said he was itching to get back in the action. Claussen, an artillery observer who arrived at V Corps artillery two weeks ago, deployed twice to Central Asia with the 3rd Ranger Battalion.

This week Claussen got his wish, he said. He headed for Iraq Monday, where he&#8217;ll use his field experience to help V Corps coordinate artillery fire.

But most rear detachment soldiers won&#8217;t get a chance like Claussen.

At V Corps headquarters on Campbell Barracks, Spc. Charlie Parks, shuffles paperwork for deployed troops from his office in the personnel shop. Parks, 31, of Wichita Falls, Texas, did similar work during a previous enlistment during Desert Storm, he said.

Still others, like Sgt. 1st Class Lori Christopher, was glad to have stayed behind.

At the 18th Military Police Brigade headquarters in Mannheim, the hallways and offices are nearly empty. Less than a dozen soldiers are on duty in the rear headquarters. On March 9, the unit left Germany for Kuwait, Christopher said.

During the first week, she heard updates from the front. But when the war began last week, the calls stopped. Like others, she turned to television reports.

In times of war, the brigade soldiers handle enemy prisoners, Christopher said. When she saw the first batch of Iraqi soldiers with their hands up, she thought of her fellow soldiers.

Meanwhile, Christopher&#8217;s husband, Kenneth, deployed to Turkey with the 51st Maintenance Company in February. She cares for their two daughters.

Tucked away in a quiet 18th MP brigade office, Spc. Michelle Rice, 27, of Chicago, stares into her computer screen. A knee injury kept her from deploying. She spends her day processing soldier&#8217;s records and filing reports. Each day she anxiously awaits the call for her to join her second family in Kuwait.

Pfc. Daniel Godbout, 21, of Tuscon, Ariz., also has a bad knee. He is glad the Army gave him time to care for his leg. And after watching news reports from the desert, he is less eager to join the fight.

The two soldiers take breaks in a conference room with projected television images of the war, courtesy of CNN. Both feel stress and frustration, so much that they have lost sleep since the war began, they said.

Some tension comes from knowing that in Germany, they have many luxuries their comrades in the Middle East don&#8217;t. Even the simple pleasures such as good food, a hot shower and a warm place to sleep are things their fellow soldiers will have to wait for.