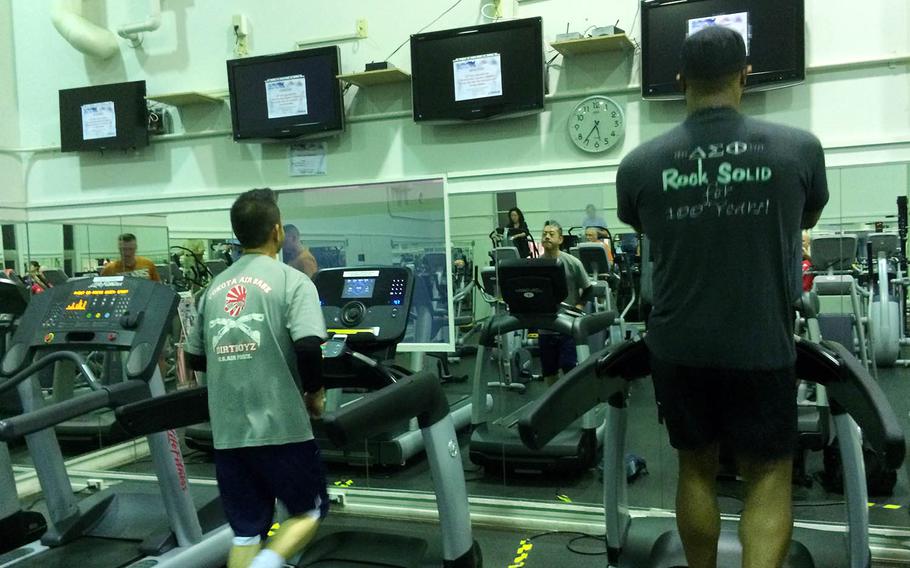 Signs posted on televisions at the Samurai Fitness Center on Yokota Air Base, Japan, inform patrons that the sets are incompatible with AFN’s new digital signal, Thursday, Nov. 30, 2017. (Seth Robson/Stars and Stripes)

YOKOTA AIR BASE, Japan — Televisions at many U.S. military facilities in the Pacific have gone dark as viewers grapple with upgrades needed to receive American Forces Network’s new high-definition channels.

The new digital signal began broadcasting in the Pacific region on Tuesday. The Atlantic and Indian Ocean regions are to follow on Dec. 5, with Europe, the Americas, Southwest Asia and Africa to transition on Dec. 12.

Viewers will see crisper images on their screens once the changeover is complete; however, there’s a catch.

To get the service, which is provided free to the military, those who have television sets that are incompatible with AFN’s upgraded MPEG-4 signal will need to get a new set-top box, or a decoder if they live off base.

People can rent a box for $6.25 a month or buy it outright for $37, cable television provider Allied Telesis’ Japan area manager Bruse Green said in an email to customers. Those living off base might need a new $229 decoder to receive the HD broadcasts.

Earlier this week, exchange stores in Japan didn’t have the new decoders in stock and suggested customers purchase one online and wait about a month to receive it. However, on Thursday, a customer service representative at the exchange on Yokota in western Tokyo said the store had received its first shipment and was about to put them on the shelves.

The changeover has been confusing for some viewers who complained on social media after their screens went dark this week.

At Yokota’s Samurai Fitness Center, televisions usually tuned to AFN’s sports and news channels were turned off on Thursday. At the Sunrise Bakery near the base’s flight line, a TV was tuned to a Japanese channel.

“We only have audio coming from AFN now, so we changed it to Japanese TV,” said Hatsuyo Doherty, a counter attendant at the bakery.

Air Force Tech. Sgt. Josh Crook, who lives and works at Yokota, said he was frustrated by the issue. He had previously been able to plug his TV into the cable outlet to watch AFN but wasn’t an Allied Telesis subscriber.

“We’ve never even had a box. So, basically, I need to go get one now. Seems convenient,” he said sarcastically.

Other residents said the change will make them more likely to stream programs over the internet rather than watch them on AFN.

“We’re watching Netflix, Hulu and Amazon only,” John Messer said in a Facebook group for Yokota residents. “I’m not giving in.”