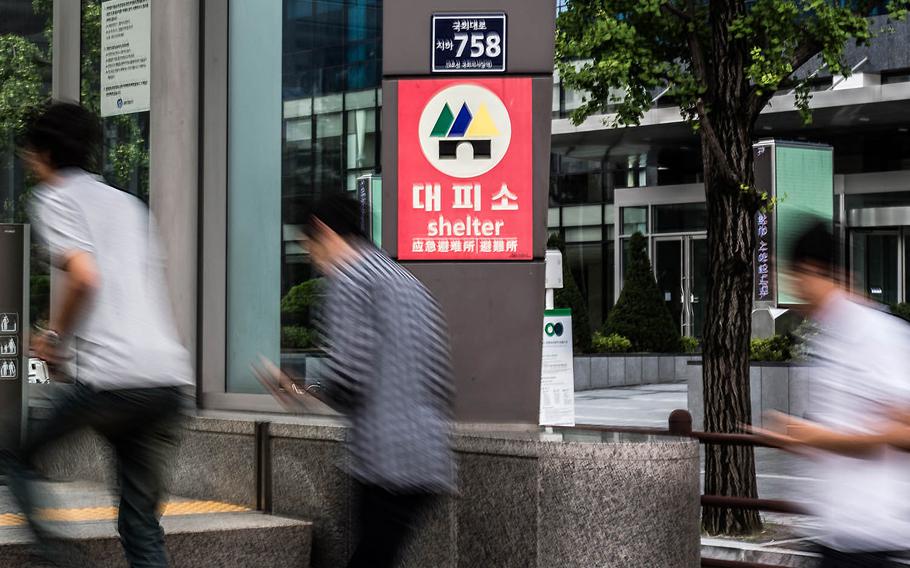 Buy Photo
South Koreans walk into a subway station that doubles as a shelter during a nationwide civil-defense drill near the National Assembly in Seoul, South Korea, Wednesday, Aug. 23, 2017. (Marcus Fichtl/Stars and Stripes)

SEOUL, South Korea – Sirens wailed across Seoul and other South Korean cities on Wednesday, signaling the start of a nationwide civil-defense drill to prepare for a possible threat from the North.

But Lee Buny, a 42-year-old broadcast writer, was more interested in getting to work than finding a bomb shelter. Like many South Koreans, she’s used to threatening rhetoric from the North but doesn’t believe the communist state will ever follow through on threats to conduct an attack on the divided peninsula.

“I’m not worried because it’s the same story I’ve heard since I was born. North Korea keeps saying the same thing over and over again,” she said. “I don’t think North Korea will do anything.”

South Korea regularly holds civil-defense drills to make sure its citizens know what to do in case of an emergency such as a national disaster or an attack from the North, which is believed to have tens of thousands of soldiers and a massive artillery force poised near the heavily fortified border that sits just 35 miles from Seoul.

This year the exercise was held against the backdrop of rising tensions as North Korea presses forward in its efforts to develop a nuclear-tipped missile that could reach the U.S. mainland. It also took place as the United States and South Korean militaries conduct joint war games that typically anger the North, which considers them a rehearsal for an invasion.

Kim Jeung Hwa said he’s worried about the situation. But he suggested that the civil-defense training scenarios should be more realistic so people will take them seriously.

“The U.S. and North Korea seem a bit serious this time so I feel a little anxiety. It doesn’t seem like the situation can be easily resolved,” he said. “But it seems to me like the training they do is unrealistic.”

The 15-minute drill was heavily publicized, and officials urged pedestrians to find underground shelters, many of which are in the extensive subway system. Vehicles were supposed to pull over to the side of the street until the all-clear sounded.

Police near the National Assembly building in Seoul on Monday blew their whistles and stopped traffic on Wednesday, but most people on the nearby street appeared to ignore the sirens that began sounding at 2 p.m. Several people at a bus stop stayed put while others walked at a normal pace on the sidewalks.

The apparent apathy reflected the widespread belief among the public here that North Korea is unlikely to strike on the peninsula despite constant threats to turn the South into a “sea of fire” since doing so would almost certainly mean devastation for both sides.

The two Koreas remain technically in a state of war after three years of fighting ended in 1953 with an armistice instead of a peace treaty. Some 28,500 U.S. servicemembers are stationed in the South.

South Korean government and military officials, meanwhile, must maintain a state of readiness. In addition to its nuclear capabilities, North Korea is believed to have vast stores of conventional weapons as well as biological and chemical agents that could be used against its neighbor.

South Korea’s Minister of the Interior and Safety Kim Boo-kyum said the drills were crucial for preparedness.

“The civil defense training is the most basic and primary training for people in a situation in which North Korea and South Korea are standing off against each other security-wise,” Kim said in a statement.