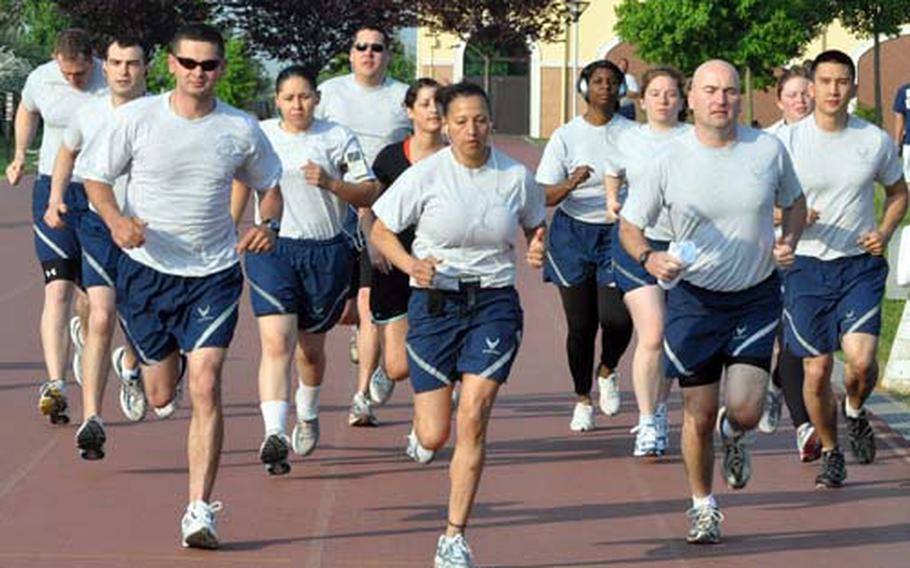 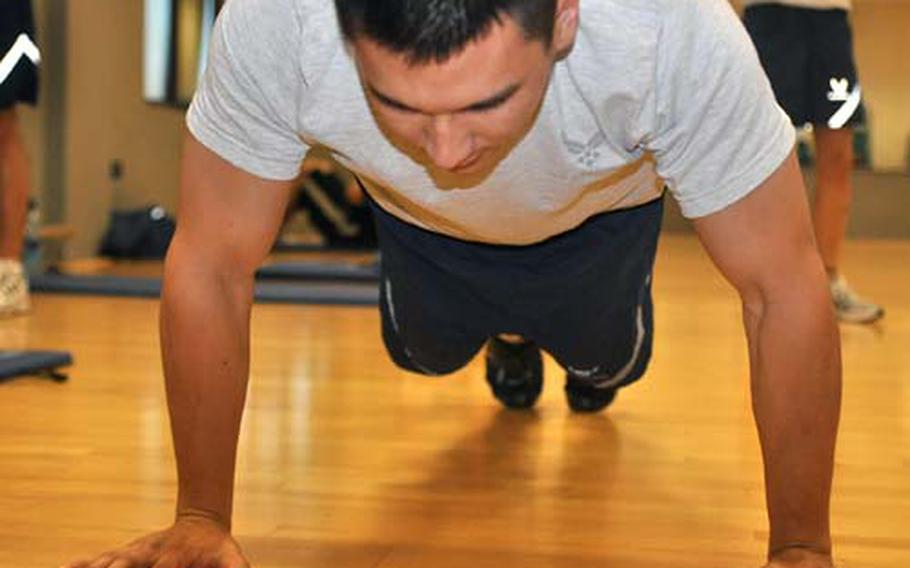 Senior Airman Anthony Enomoto does push-ups Friday at the Dragon Fitness Center at Aviano Air Base, Italy, during physical fitness testing. Enomoto and other members of the 31st Operations Support Squadron appeared to be doing well in the testing. But samples taken by the Air Force indicate that many airmen worldwide will have to improve their fitness to pass new standards that take effect July 1. (Kent Harris/S&S) 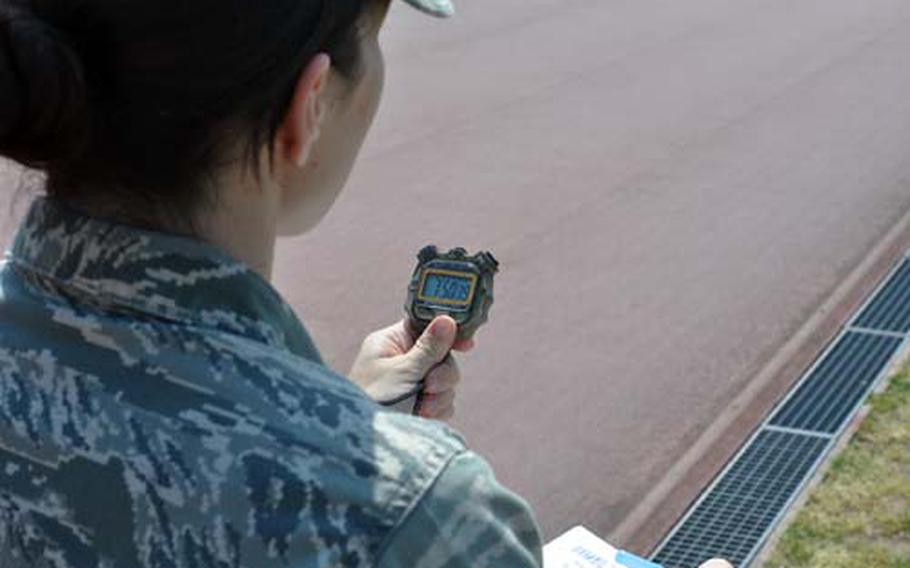 From top, Staff Sgt. Rebecca Timberman, Senior Master Sgt. Willy Nelson and Tech Sgt. Lynette Cullins complete as many crunches as they can Friday during physical fitness testing under the current standards at Aviano Air Base in Italy. (Kent Harris/S&S)

AVIANO AIR BASE, Italy &#8212; Nearly one-third of airmen could fail the Air Force&#8217;s physical fitness test when new standards are put into place on July 1, if recent sampling is any indication.

In January, Air Force officials began scoring PT results under the new and old standards. An estimated 30 percent of the force would fail if the new standards were imposed, an Air Force spokesman said Wednesday.

There was no effort to get a scientific sample, but Chief Master Sgt. Mark Long, chief of enlisted promotion, evaluation and fitness, said the service does expect "a significant" failure rate when the testing becomes official in a few months. Long did not say how many results were examined.

Despite those expectations, there are no plans to delay the implementation of the new standards again, he said. They were already postponed once to give commands time to hire civilian testers, give airmen time to adjust and offer everyone a chance to comment or make suggestions.

"We believe we have the right test," he said in a phone interview from the Pentagon.

Those who fail will not automatically be kicked out of the Air Force, but the new initiative does give commanders that option, said Capt. Sean Brazel, chief of officer evaluation and fitness policies.

Those who don&#8217;t pass will generally be put into specialized programs to improve their fitness. Some may face various administrative actions.

Airmen who have not passed a recent test will not deploy and are not eligible for the schools they need to attend in order to receive promotions.

The service determined that the system needed to change after a 2008 review found not only that many airmen trained harder only around testing time, but that the annual tests often weren&#8217;t being administered properly, and actions against those who failed weren&#8217;t consistent.

Under the new program, airmen are tested twice a year and not only have to run quicker and do more sit-ups and push-ups, but also achieve passing results in all four categories: a 1.5-mile run, an abdominal circumference measurement, sit-ups and push-ups. In the past, high scores in two or three categories were enough to offset poor scores in others.

Perhaps the biggest change is that civilians now will conduct the testing at all but the smallest bases, a move designed to standardize testing as well as eliminate favoritism that might have occurred when airmen were monitoring friends or supervisors.

Some civilians are already in place, and officials believe they&#8217;ve had an effect on results.

The rate jumped to 12 percent in the first four months of 2010, when civilians started giving tests and airmen started using stricter standards, according to Brazel.

"The tests are a lot more accurate" with civilians running them, according to Lou Stadler, health promotions flight chief at McConnell Air Force Base, Kan.

McConnell has been one of the more proactive bases in preparing airmen for the new standards.

It has programs to help airmen not only improve scores, but also exercise properly.

Using the right techniques for running and lifting weights helps prevent injuries and can improve performance, Stadler said. He said airmen should seek out similar programs at their bases before the standards change.

Long is more succinct in his advice: "Train, train, train."

Since all active-duty personnel will have gone through one round of testing before July, Long said everyone should know where they stand.

He said the service&#8217;s leadership expects the failure rate to steadily decrease as the months pass.

Pacific Air Forces has had a similar fitness testing program in place and the failure rate went from 3 percent to 21 percent in the first month it started, Long said. But it&#8217;s gone down steadily since.

"It&#8217;s to change the culture of Air Force fitness," Long said. "It all boils down to readiness and making us a fitter force to fight wars."