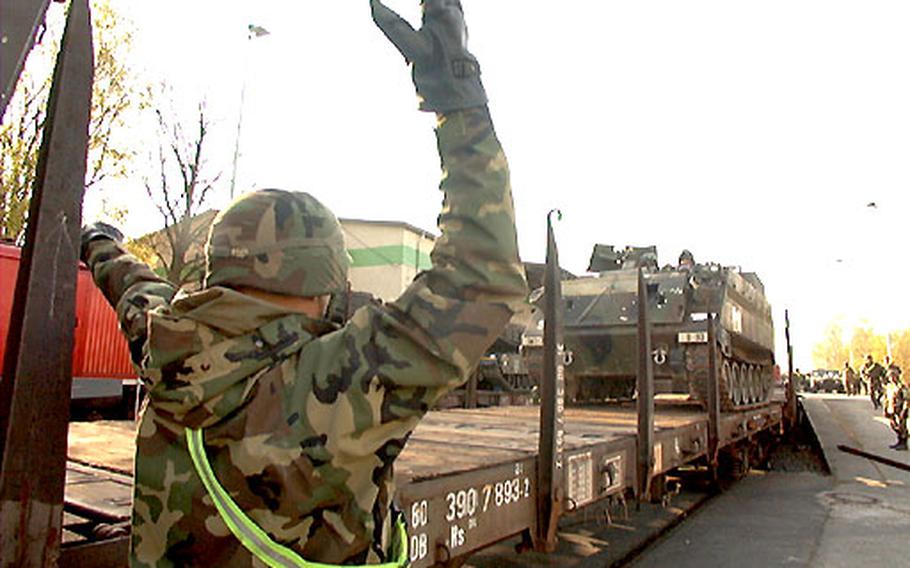 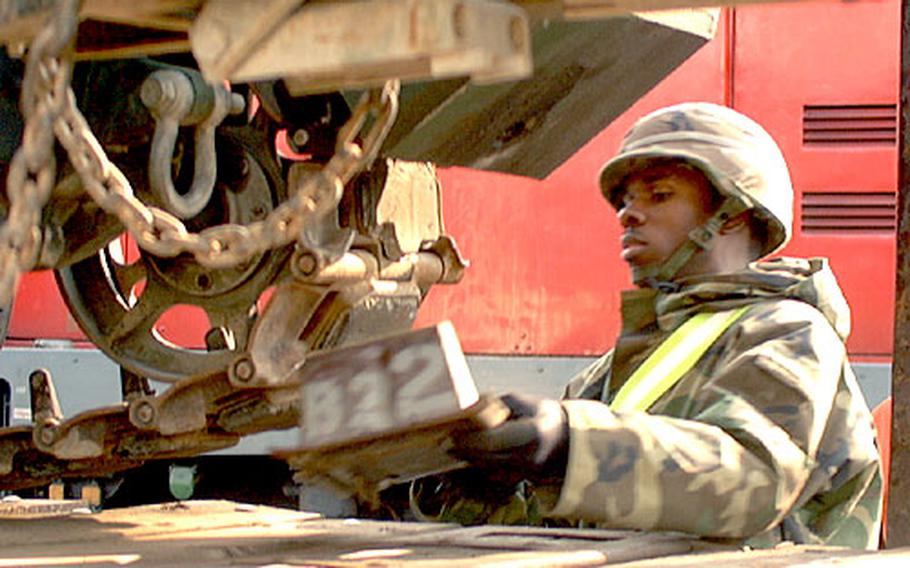 A tank crewman for just seven months, Salas, 19, of Kenedy, Texas, watched in awe as his unit, Company B, 1st Battalion, 37th Armor Regiment, mounted its behemoth killing machines onto rail cars outside Ray Barracks for shipment to Iraq.

For soldiers from the 21st Theater Support Command and the Military Traffic Management Command, one train of tanks is just a small piece of the transportation puzzle. They are the ones who plan and execute the mammoth task of moving the 1st Armored Division from Europe to southwest Asia.

The rail loading Salas observed is represented by a small box on a multicolored movement matrix hanging in Maj. David Touzinsky&#8217;s office on Kleber Casern in Kaiserslautern.

To move the division &#8212; which received orders last month to go to Kuwait to support U.S. Central Command operations in the Middle East &#8212; the Army is using about 80 trains, plus some 200 commercial trucks, 130 river barges and 500 shipping containers. That takes a lot of prior thought, Hiburn said.

Originally, agency planners targeted the Monday following Easter for the division to load out. The deployment was to have lasted six weeks, Touzinsky said.

Instead, the Army ordered them to begin April 9 with just a three-week timetable, which meant adjusting complicated rail and barge shipments with units and local officials. By Monday, their original start date, 80 percent of the unit will be loaded out of Europe, Hiburn said.

And that wasn&#8217;t the only hitch. The Army&#8217;s original plan called for tank trains to move to the port in Antwerp, Belgium. The Army can deploy 10 trains per day from Germany, with ports in Antwerp and Rotterdam in the Netherlands receiving five each, Hiburn said.

But the movement coincided with local elections in Belgium, and top military officials told planners to leave Antwerp out of their equation for a while. That forced the Army to send everything to Rotterdam.

After the equipment reaches the deep-water ports, it will go by sea to the Persian Gulf, while the troops that will use it are flown down.

Shipping out takes &#8220;a lot of trains and barges, a dash of patience and a lot of responsibility,&#8221; said Col. Michael Tucker, commander of the division&#8217;s 1st Brigade.

While Tucker&#8217;s Ready First brigade soldiers can prep their gear to move, they rely on transportation troops to get them to the battlefield.

What his soldiers seek to avoid is &#8220;frustrated cargo,&#8221; a term logisticians use when a vehicle or shipping container could pose a threat to a train, barge or boat. Things might be loaded wrong, it may be leaking, or contain undocumented hazardous material, Tucker said.

Rolling out the division&#8217;s 1st Brigade fell upon the shoulders of its movement officer, 25-year-old 1st Lt. Erik Peterson, of Chesterton, Ind.

He recorded data on the brigade&#8217;s various vehicles and forwarded that information to movement planners. He also identified sensitive cargo such as hazardous materials, weapons and petroleum products.

And the fact that the tanks are now headed to Rotterdam is irrelevant, he said.