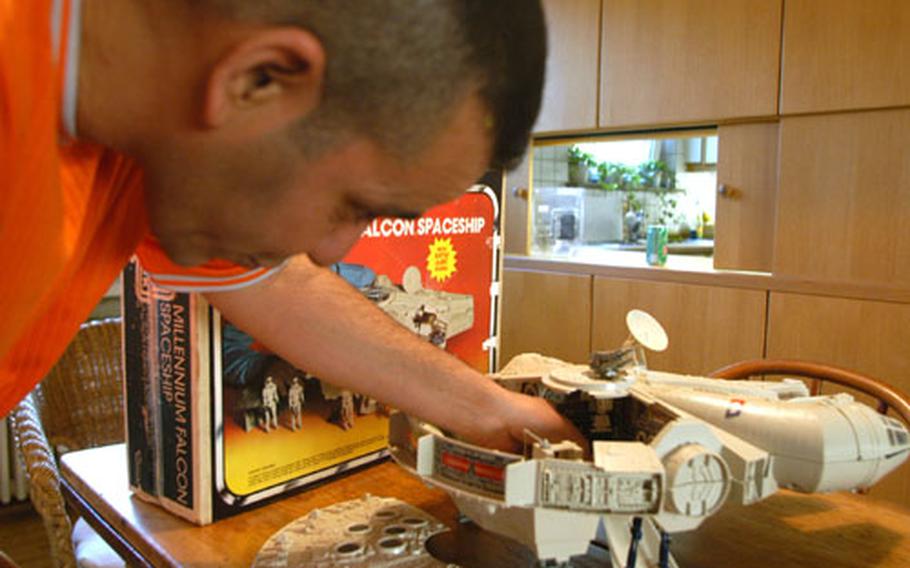 Staff Sgt. Luis Olmo-Jimenez, a corrections officer with the 9th Military Police Detachment in Mannheim, Germany, shows off a toy spaceship that is part of his "Star Wars" collection. (Rick Scavetta / S&S)

Staff Sgt. Luis Olmo-Jimenez, a corrections officer with the 9th Military Police Detachment in Mannheim, Germany, shows off a toy spaceship that is part of his "Star Wars" collection. (Rick Scavetta / S&S) 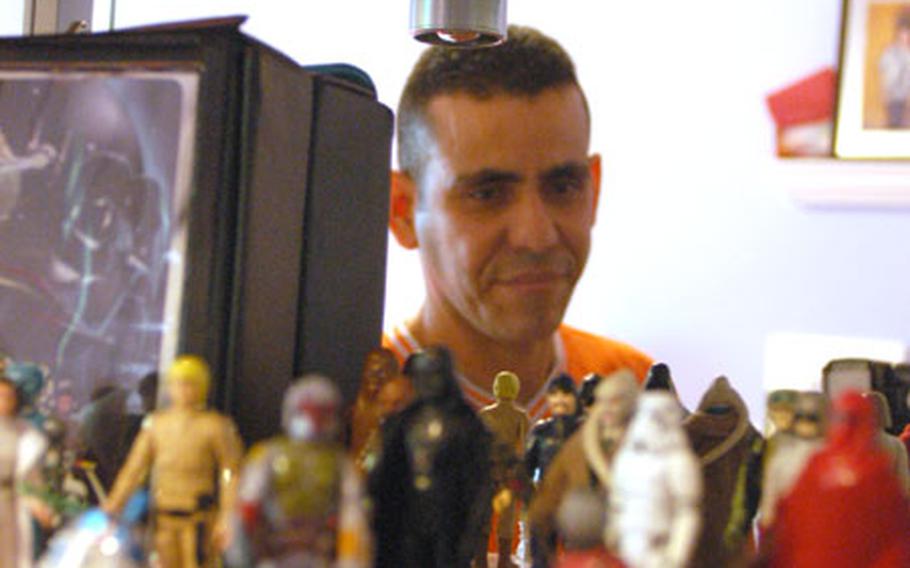 Staff Sgt. Luis Olmo-Jimenez, a corrections officer with the 9th Military Police Detachment in Mannheim, Germany, shows off some of the "Star Wars" figures that he&#39;s collected over the years. (Rick Scavetta / S&S)

In 1977, when he was 12, he and his schoolmates each paid $1.75 and packed into a 150-seat theater in his hometown of Barceloneta, Puerto Rico, to watch George Lucas&#8217; sci-fi adventure &#8212; complete with Spanish subtitles. It apparently changed his life.

During a shopping trip in nearby Arecibo, his father popped into Woolworth&#8217;s and came out with Darth Vader, Olmo-Jimenez&#8217;s first action figure. That Christmas, he received an electric racetrack with X-Wing and Tie fighters rather than slot cars. Every time he earned money, he&#8217;d buy a new figure, which at the time cost about $1.50.

Some of his early collection did not survive the imagination of boys growing up in countryside.

But his collecting continued through high school. When he entered the University of Puerto Rico to study horticulture, he had roughly 70 figures.

He had everything from &#8220;Star Wars&#8221; toothbrushes and ties to cereal boxes and TV guides. A friend suggested he take it more seriously, so he bought a buyer&#8217;s guide.

His most expensive figure is one of his smallest, a 1977 Jawa character with an original plastic cape valued at $450. His favorites are the Luke Skywalker Stormtrooper and the 12-inch Boba Fett doll.

He&#8217;s already collecting figures from the upcoming &#8220;Star Wars&#8221; installment. He&#8217;s also looking for other collectors who are members of the military overseas.

At home, in Benjamin Franklin Village housing area, the toys are a hobby that he keeps to himself, said his wife, Megan. She bought him a curio that holds 115 of the original 117 figures. The rest is stored in boxes.