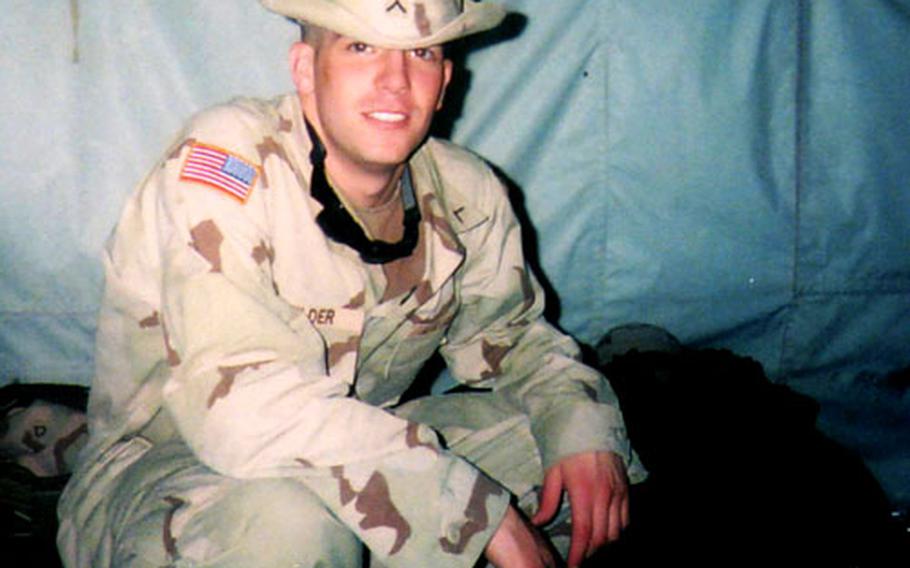 Questions loom involving the details of Spc. Donald Anthony’s death. An autopsy was inconclusive. (Courtesy of the Wilder family)

Questions loom involving the details of Spc. Donald Anthony’s death. An autopsy was inconclusive. (Courtesy of the Wilder family) 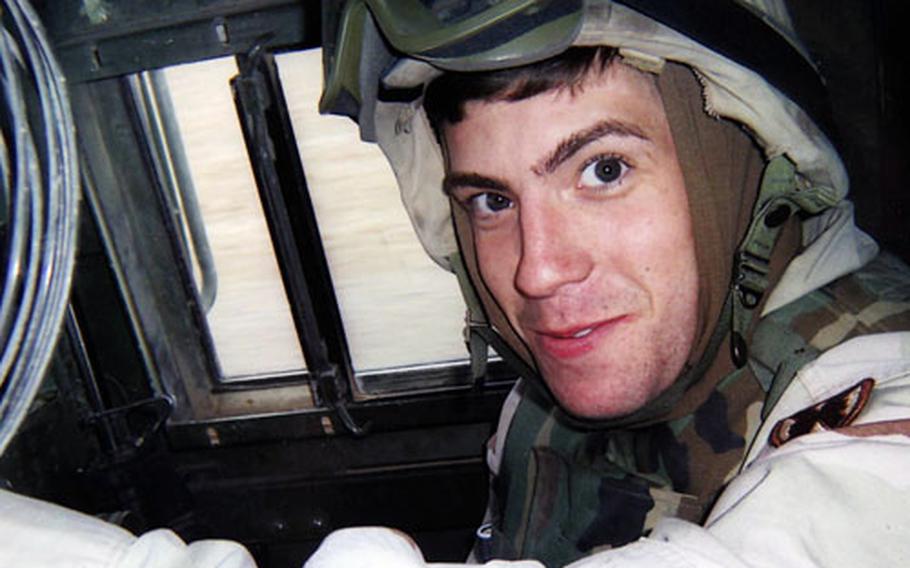 MANNHEIM, Germany &#8212; Weeks before Spc. Donald Anthony Wilder was found dead in a barracks shower, his parents say, he told them he knew he was going to be beaten.

The Prince Hall Masons are a predominantly black, secretive brotherhood. Similar to other branches of Masons, the group offers networking opportunities and performs community service. Several U.S. troops in Europe and around the world belong to the Prince Hall Masons.

In order to become a third-degree Mason, Wilder knew he would have to endure being beaten on his buttocks with a paddle by fellow Masons.

His plan was to get so drunk for the Jan. 7 ceremony that he wouldn&#8217;t feel the pain of the beatings, according to a friend, Spc. Tony d&#8217;Ercole. His mother, Diane Wilder, said her son told her that if he got so drunk that he passed out, his fellow Masons would take his blows.

On Jan. 8, just hours after the evening ceremony that took place inside Mannheim American High School at Benjamin Franklin Village, Wilder was found dead in a friend&#8217;s shower in the barracks at Spinelli Barracks in Mannheim.

Wilder&#8217;s actions during the days leading to his death have been outlined by a friend, d&#8217;Ercole and his mother.

The Prince Hall grand lodge that has jurisdiction of the lodge with which Wilder was active issued an edict against hazing just 10 days after Wilder died.

&#8220;Be it hereby known and acknowledged that there will be no hazing or un-Masonic conduct of any sort tolerated during degree work within the Jurisdiction of the Most Worshipful Prince Hall Grand Lodge of Washington and Jurisdiction,&#8221; the Jan. 18 letter stated. &#8220;Any such behavior that is determined to be inappropriate will be dealt with swiftly and unequivocally per our code on un-Masonic conduct.&#8221;

The letter was signed by Wendell O. Hutchings, the lodge&#8217;s grand master.

In a telephone interview, Hutchings said his group is investigating what happened at the initiation ceremony. He said paddling is forbidden.

He called what happened Jan. 7 an isolated incident and said it was not reflective of the Prince Hall Masons as a whole.

&#8220;Those individuals responsible are certainly going to be dealt with swiftly,&#8221; he said. &#8220;We are going to make a decision on those individuals who participated in that initiation.&#8221;

Last daysDonald Wilder&#8217;s parents say their son told them quite a bit about the Masons, except for the group&#8217;s secrets. He talked about the good work he did with the Masons. The group raised money for Hurricane Katrina victims and for the college funds of children of U.S. troops killed in action. He told them about the roughly $1,000 in dues he paid since September to be a Mason.

Also, he told them about the paddlings he took when he became a first- and second-degree mason last fall: how he would lie in his bed at Spinelli Barracks in Mannheim, icing his body after the paddlings, his mother said.

He said the beatings were to show the other Masons just how badly you want to be a member.

On Christmas, Diane Wilder talked to her son twice. During those conversations, she says, Donald Wilder expressed concern about the paddlings he knew awaited him.

His parents told him not to go through with it. They would pay for him to join the Masons in Texas where he was set to be reassigned by the Army.

The week before his death, the Wilders talked to their son every other day. On Jan. 5 &#8212; three days before he died &#8212; Wilder promised his mother he would not go through with the third-degree ceremony, she said.

Donald Wilder would not stay true to his word.

Also on Jan. 5, Wilder went to Murphy&#8217;s Law Irish Pub in Mannheim. He met friends that evening, including Maria Testai, a German acquaintance, and d&#8217;Ercole, a soldier in Wilder&#8217;s unit who served with him in Iraq.

The two soldiers talked for about an hour at the bar, d&#8217;Ercole said, and Wilder seemed relaxed. Testai said Wilder told her that he would like to go to a movie with her during the coming weekend.

On Jan. 6, Wilder ate dinner with a friend and the friend&#8217;s wife. It was there that he told the couple his plan about getting drunk for the following evening&#8217;s ceremony, d&#8217;Ercole said.

The initiation ceremony took place inside Mannheim American High School. The group initially requested to use the facility on Jan. 6. Because of school rehearsals, the high school was not available, said Dennis Bohannon, public affairs officer for Department of Defense Dependents Schools-Europe.

A key to the school was checked out to the Masons on Jan. 5. The group used the key to enter the facility without authorization on Jan. 7, Bohannon said.

When asked how school officials knew that the Masons were in the facility on Jan. 7, Bohannon said, &#8220;someone in the school has personal knowledge.&#8221;

After the ceremony, Donald Wilder went out clubbing, his mother said.

Sometime during the morning of Jan. 8, Wilder was found lying unconscious and unresponsive in the shower of a friend&#8217;s room at Spinelli Barracks, said Diane Wilder. Medical professionals, military police and the German police were called to the scene.

Officially speakingTo date, no charges have been preferred against anyone in relation to Wilder&#8217;s death. Until further autopsy studies are complete, it is unknown whether Wilder died of alcohol poisoning or something else.

Officially, the command that Wilder&#8217;s unit comes under is working with the Army&#8217;s Criminal Investigation Command, known as CID, to find out what happened.

&#8220;We have multiple, ongoing investigations to ensure that the facts are known and everything that can be done to prevent this from happening to other soldiers,&#8221; said Maj. Allen Hing, 21st Theater Support Command public affairs officer.

To protect the integrity of its investigation, CID is not releasing details of the investigation at this time, said Christopher Grey, CID spokesman.

Soldiers are not prohibited from joining such groups as the Masons. D&#8217;Ercole estimated about six or seven soldiers in his roughly 250-man unit are Masons.

The Masons are a secret society that dubs itself the world&#8217;s oldest and largest fraternity. Masons rise in rank by performing degree-work.

Prince Hall Masons, made up primarily of black men, began in Massachusetts about 200 years ago as an offshoot of the early Masonic lodges in America. The African Lodge was organized on July 3, 1776, with Prince Hall as the worshipful master.

The African Lodge grew and prospered to such a degree that Prince Hall was appointed a provincial grand master in 1791. Out of this grew the first Black Provincial Grand Lodge.

In 1847, out of respect for their founding father and first grand master, Prince Hall, the three existing African lodges changed their name to the Prince Hall Grand Lodge, the name it carries today.

Today, some 5,000 lodges and 47 grand lodges exist that trace their lineage to the Prince Hall Grand Lodge, Jurisdiction of Massachusetts.

The Prince Hall Grand Lodge of Maryland has jurisdiction over several lodges in Germany that have their meetings on military installations. Installation commanders determine if private groups &#8212; such as the Masons &#8212; can meet on military facilities, said Air Force Lt. Col. Ellen Krenke, a Department of Defense spokeswoman.

Most scholars believe Masonry arose from the guilds of stonemasons who built castles and cathedrals of the middle ages. In 1717, Masonry created a formal organization when four lodges in London joined to form England&#8217;s first Grand Lodge.

The Masons perform charitable services as well. The Shrine Masons (Shriners) operate the largest network of hospitals for burned and orthopedically impaired children in the country, and there is never a fee for treatment. The Scottish Rite Masons maintain a nationwide network of more than 150 Childhood Language Disorder Clinics, Centers, and Programs.