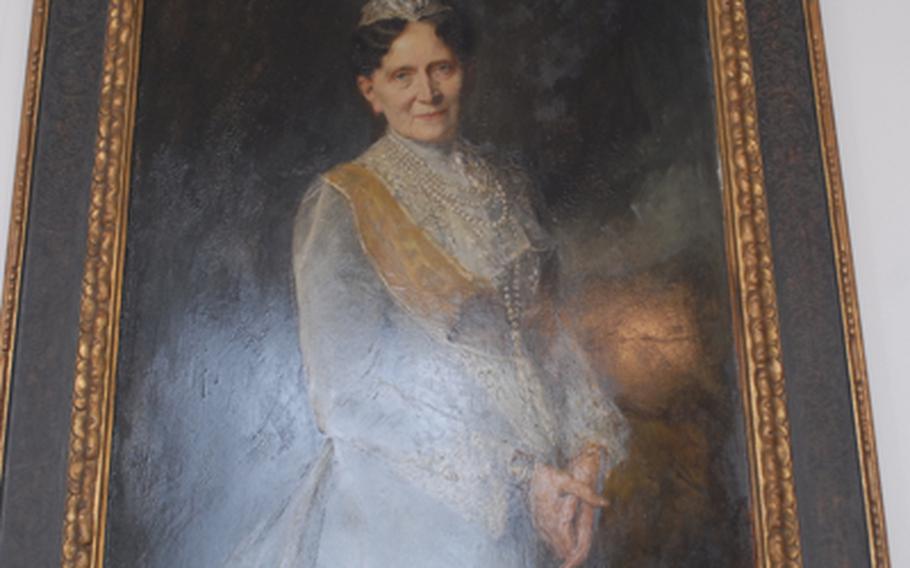 Buy Photo
The last duchess to live in the Mannheim palace was Louise V of Baden, who lived from 1838 to 1923. The Baden family followed the Wittlesbach family, which built the palace in the 1700s. (Nancy Montgomery/Stars and Stripes)

Buy Photo
The last duchess to live in the Mannheim palace was Louise V of Baden, who lived from 1838 to 1923. The Baden family followed the Wittlesbach family, which built the palace in the 1700s. (Nancy Montgomery/Stars and Stripes) 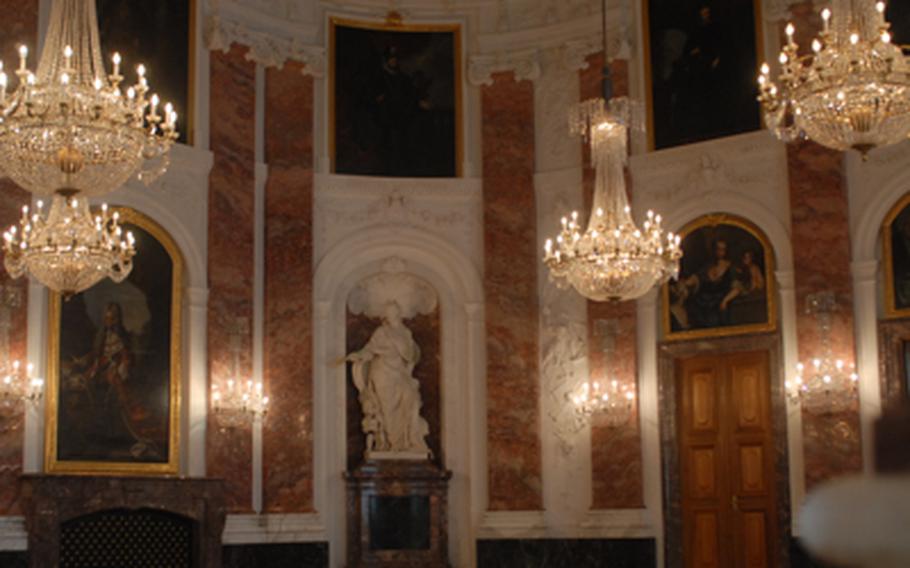 Buy Photo
The Knights Hall is a beautiful ballroom, now available for rent. Its ceiling, according to guide Michael Senior, is about the size of an Olympic swimming pool. (Nancy Montgomery/Stars and Stripes) Buy Photo
The Mannheim palace, like nearly everything in the city center, was destroyed by Allied bombers in World War II. It was painstakingly reconstructed. (Nancy Montgomery/Stars and Stripes) Buy Photo
A simple table setting inside the Mannheim palace, which was once a residence of the Wittlesbach family from Bavaria and the local Palatinate area. (Nancy Montgomery/Stars and Stripes) 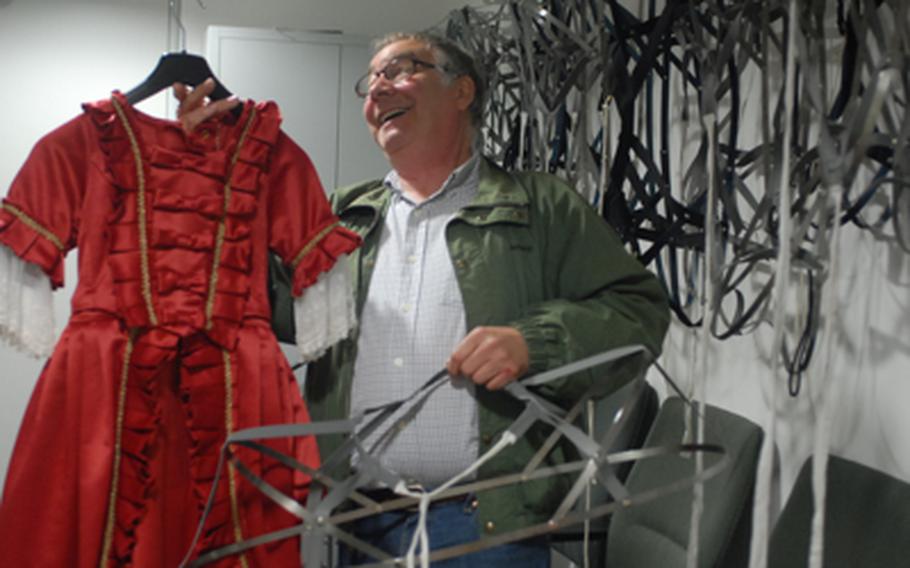 Buy Photo
Michael Senior, tour guide with Baden-Württemberg for the palaces and castle of the Wittlesbach family, shows one of the Mannheim palace's selection of 18th-century costumes for school groups to wear when they visit the palace. The hoop goes under the dress. (Nancy Montgomery/Stars and Stripes)

Everyone goes to the Heidelberg castle.

But few visit two other nearby royal residences where the Wittlesbach family from Bavaria and the local Palatinate area idled away time and bowed to no one but the Holy Roman Emperor.

Michael Senior, an autodidact tour guide of all things Wittlesbach, would like to change that. The ex-pat Brit, who works with the German state of Baden-W&uuml;rttemberg, leads English-language tours of the family&rsquo;s summer palace and gardens in Schwetzingen, Germany, and the splendid Mannheim palace, a hidden baroque gem that was destroyed by Allied bombs in World War II, then rebuilt.

Everything you always wanted to know about the royal Wittlesbachs, who were more interested in leisure and the arts than empire building, Senior will be happy provide. Like all European royalty of the day, they tended to marry their cousins, live largely unbathed and were surrounded by silk, gilt and ornament and retinues of servants.

The Mannheim palace was built between 1720 and 1760. It was designed to be the largest palace in Europe, with one more window than Versailles, and had 500 rooms. It also boasts &ldquo;one of the largest staircases&rdquo; in Europe, although how that&rsquo;s measured is unclear.

Karl Philip moved in in 1731 at age 70, Senior said, forsaking Heidelberg, which had been the family seat for one of its two branches for four centuries. The problem, Senior said, was that Karl Philip was Roman Catholic and the Heidelberg area was rife with Lutherans and Calvinists.

What&rsquo;s more the Heidelberg castle had been destroyed in the late 1680s and 1690s by the armies of Louis XIV of France, had previously been hit by lightning and set aflame and looked to be expensive to rebuild. So it remained a ruin and became an important symbol of German Romanticism, a movement of the late 1700s and early 1800s that took a nostalgic view of the Middle Ages, and remained a tourist magnet.

In the meantime, the ruling family, while still living in Heidelberg (although not usually in the castle), had started spending summers in Schwetzingen. There, what had been a hunting lodge developed into a palace and a park-sized baroque gardens, which the city of Schwetzingen has been trying to get listed on the UNESCO&rsquo;s list of World Heritage Sites for several years.

For both the Mannheim and Schwetzingen palaces, the golden age, Senior said, lasted from 1742 to 1799, when Karl Theodor, prince-elector, Count Palatine and duke of Bavaria, and his wife, Elisabeth Auguste, entertained themselves and others there.

Among the most stunning rooms in the Mannheim palace is the Knights Hall, all marble and sparkling chandeliers, and with a Roman myth-themed painted ceiling that Senior said is &ldquo;about the same size as an Olympic swimming pool.&rdquo;

When Karl Theodore and Elizabeth Auguste were married there in 1742, there were 576 guests, Senior said, but only 84 were allowed to eat at the wedding banquet. &ldquo;All others were allowed to watch,&rdquo; he said.

The Palatinate was dissolved by Napolean in 1806. The rest of the German princes abdicated in 1918, part of the new world order after World War I. Most of the palace became part of the University of Mannheim, and serious students of economics now roam its rooms.

The Mannheim palace is on Bismarkstrasse, on the edge of the city center. From Autobahn 656, head to the center, then to the train station. At the last intersection before the station, turn right on Bismarkstrasse. From the west, exit A61 at Kreuz Ludwigshafen onto A650. This will turn into highway B37, going through Ludwigshafen to Mannheim. After crossing the Rhine, the palace will be in front of you. By public transportation take tram No. 1, 3 or 5 from the main train station, and get off at "Schloss." It is about a 10-minute walk from the station.

The palace museum is open 10 a.m. to 5 p.m. Tuesdays through Sundays. It is advisable to phone ahead because some rooms are occasionally rented out and closed to the public.

Palace entry, including audio-guide, is 6 euros for adults, 3 euros for those qualifying for deductions. Family and group rates are also available. Audioguides in English are available. The city has a special, two-for-one entry fee for married American couples on U.S. holidays.

There is no food at the palace, but downtown Mannheim is right across the street, where there are plenty of possibilities in all price classes.

The palace website is www.schloss-mannheim.de/en/palace-mannheim/Home/268156.html, and its e-mail address is info@service-centerschloss-heidelberg.com. Its telephone number for information, guided tours and special events is 06221-6557-18, for the visitors center it is 0621-292-2891. Schwetzingen palace and garden tours are offered in English at 2 p.m. every Saturday, Sunday and German public holidays; adult admission is 9 euros.