Lt. Col. John Garrity carries of a ring of dog tags stamped with the names of all seven of the soldiers he has lost in Iraq. (Jon R. Anderson / S&S)

Lt. Col. John Garrity carries of a ring of dog tags stamped with the names of all seven of the soldiers he has lost in Iraq. (Jon R. Anderson / S&S) 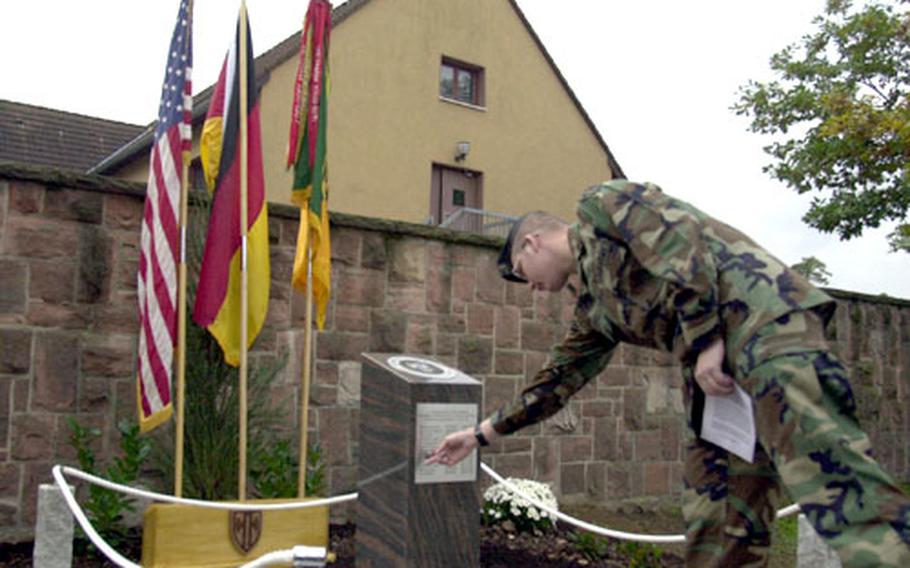 An 18th Military Police Brigade soldier reaches out to the name of a fallen comrade. A new memorial to the 13 soldiers who died in Operation Iraq Freedom I was unveiled Wednesday at the brigade headquarters in Mannheim, Germany. (Jon R. Anderson / S&S)

When Garrity, commander of the 709th Military Police Battalion, arrived at the scene of the ambush on Oct. 20, 2003, a small surgical team already was working furiously to save the doomed soldier where he fell to an insurgent&#8217;s roadside bomb on the dirty streets of Baghdad.

Within minutes, another ambush was unleashed wounding an entire squad of Garrity&#8217;s MPs on the other side of town.

On Wednesday, the Germany-based 18th Military Police Brigade unveiled a memorial honoring those who made the ultimate sacrifice in Iraq. The brigade has had troops deployed to Iraq continuously since the war began.

On a humble, granite pillar &#8212; black with streaks of crimson rust &#8212; the names of all 13 soldiers who died during the first year of occupation in Iraq are inscribed under the twin battle axes of the brigade&#8217;s patch.

&#8220;Many of us grew up occasionally visiting monuments in our own country emblazoned with the names of heroes we never knew. Now we understand,&#8221; the brigade commander, Col. James Brown, told the gathering of troops assembled to quietly dedicate the memorial.

&#8220;The names on this monument represent soldiers we knew, loved and called friends. Their loss stabs out our hearts and steels our resolve to reap the harvest that they have planted through their service and sacrifice.&#8221;

Flanking the memorial, 13 plants will grow in a broken circle, representing the lives cut short.

While small, the new memorial will help others remember those accomplishments came with a price, said Olson.

&#8220;I think it&#8217;s important for the soldiers who come after us to remember those who have come before and paid the ultimate sacrifice. With this memorial, I know that Bosveld will not be forgotten.&#8221;