Mannheim confinement facility to be renovated 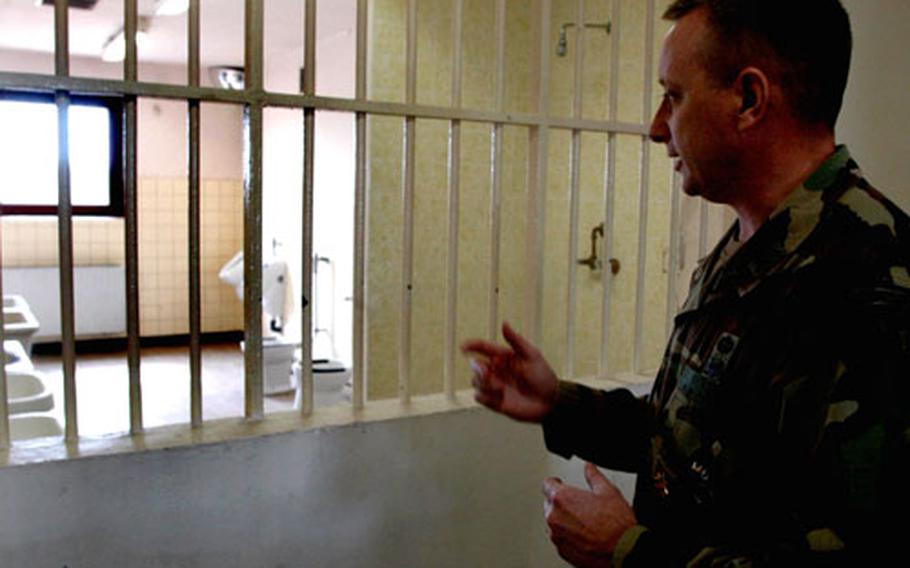 MANNHEIM, Germany &#8212; Some prisoners at the U.S. Army Confinement Facility-Europe will soon have hot water and self-flushing toilets thanks to a $3 million renovation set to begin next month.

The project, which is expected to last 15 months, will be the first major renovation of the 41-year-old confinement center.

It&#8217;s overdue for a face lift, officers at the facility said.

The place smells like an old Army barracks, after years of cleaning with disinfectant and buffing floors with wax. Inmates clad in dark brown scrubs live in long, tiled bays surrounded by painted steel bars.

Guards must open each cell door with a key.

In the summer, the place can be stifling.

That will soon change.

Fresh paint and new floor tiles are on order, as are new fixtures for the open gang latrines. The segregation cells &#8212; where new inmates and disciplinary problems are housed &#8212; will get fresh air, better lights, hot water and self-flushing toilets.

An electronic gate opener will allow guards to remotely access inmates&#8217; cells, and fire sprinklers will be added to the cellblocks and the facility&#8217;s administration areas, Wilson said.

&#8220;Back when this was built, sprinklers were not a requirement,&#8221; Wilson said, adding that the new fire system must also be inmate-proof.

The projects were funded in September 2002, but the design phase just wrapped up in January, Wilson said. If everything runs on schedule, the renovation will be complete by September 2005, he said.

The improvements may have a psychological effect on prisoners, said Staff Sgt. Timothy Jones, a mental health specialist who works with inmates on rehabilitation.

During the construction, inmates will live in a smaller wing that was added in 1984, said Maj. Jeffery Cromwell, commander of the 9th Military Police Detachment.

The confinement center, set behind Coleman Barracks just north of Mannheim, can house up to 236 troops either awaiting trial or serving sentences. This week, about 77 inmates were there, but on average it holds about 60, Cromwell said.

In the past year about 40 prisoners came from downrange, including Asan Akbar, the sergeant from the 101st Airborne Division accused of killing fellow soldiers during a grenade attack last year in Kuwait.

The Mannheim facility also can serve as a way point for incarcerated troops heading to stateside prisons.

Cromwell and his staff will have to work closely with other Army corrections and legal offices to manage the flow of inmates, he said. Prisoners finishing short sentences will likely remain, while those with longer sentences will be transferred to the States, he said.