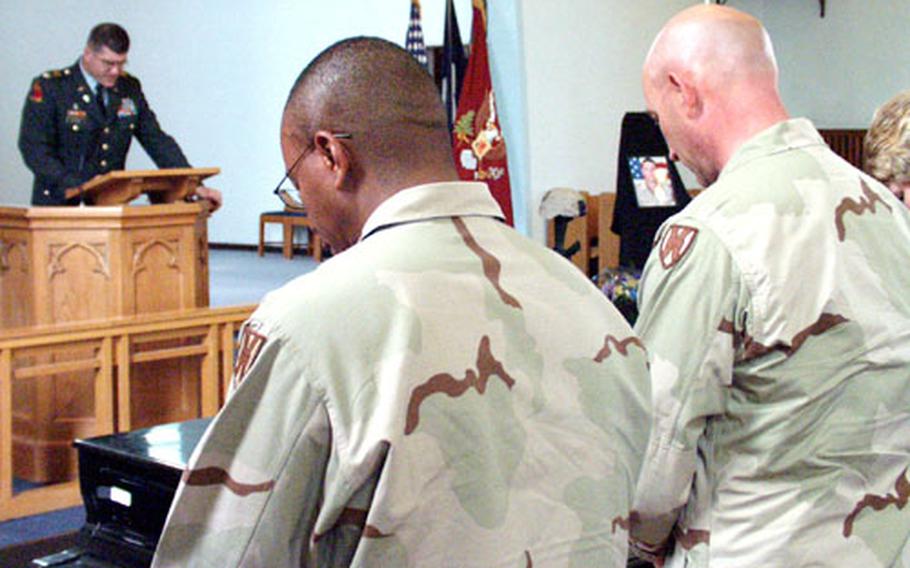 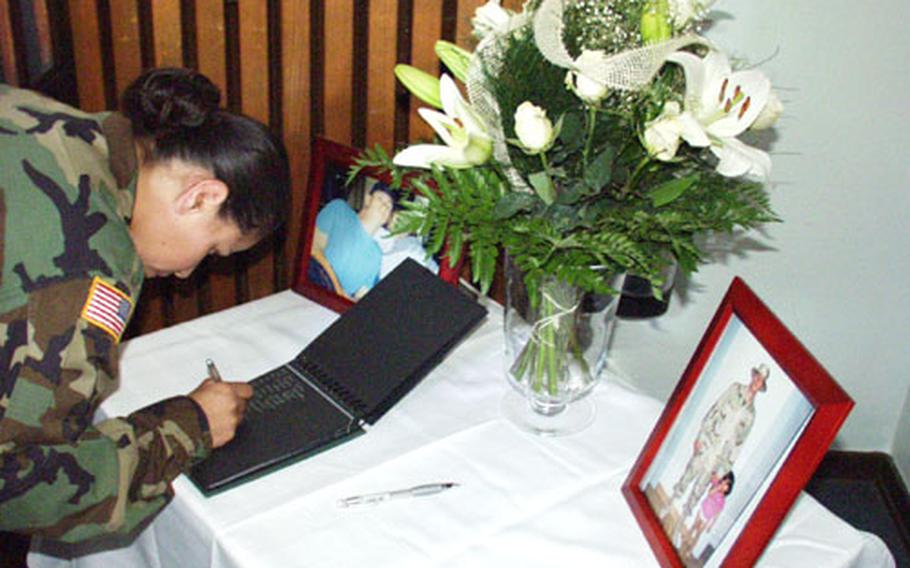 A soldier signs the condolence book at the memorial ceremony for Spc. Douglas E. Kashmer on Wednesday in Mannheim, Germany. Kashmer is pictured on the right with his beloved three-year-old daughter Kashmaria. (Steve Mraz / S&S)

On June 8, the Army specialist gave his life.

On Wednesday, Kashmer&#8217;s fellow soldiers, family members and civilians from the Mannheim community remembered the 27-year-old husband and father at a soul-stirring ceremony at Benjamin Franklin Village Chapel.

Kashmer died near Nippur, Iraq, about 100 miles south of Baghdad, when the wrecker in which he was riding rolled over in a noncombat related incident.

Kashmer entered the Army on Oct. 30, 2003, and joined the Mannheim-based 68th Transportation Company in spring 2004.

Kashmer will also be remembered for being the proud father of a 3-year-old daughter, Kashmaria.

While on recent rest-and-recuperation leave from his deployment, Kashmer had an image of his daughter tattooed on his leg. Two pictures of Kashmer and his daughter flanked the guest book at Wednesday&#8217;s ceremony. During the ceremony, Kashmaria was continually referred to as the &#8220;pride and joy&#8221; of Kashmer&#8217;s life.

During his deployment to Kuwait, Kashmer participated in more than 10 missions in Iraq. He was awarded the Bronze Star, the Iraqi Campaign Medal, the Global War on Terrorism Service Medal, the National Defense Service Medal and the Army Service Ribbon.

&#8220;I remember telling him that regardless how this deployment works out I will always have your back,&#8221; said Pittam, reading the comments of Spc. Christopher Curry. &#8220;He told me the same thing. I kept my promise, and I know he is still keeping his. I lost a friend but gained a guardian angel.&#8221;

Kashmer is survived by his wife, Toni, and daughter; his mother, Carol; and his stepbrother, Dean Schultz. Kashmer&#8217;s funeral is scheduled for Saturday in Sharon, Pa.