Mandatory transition program for outgoing troops getting under way 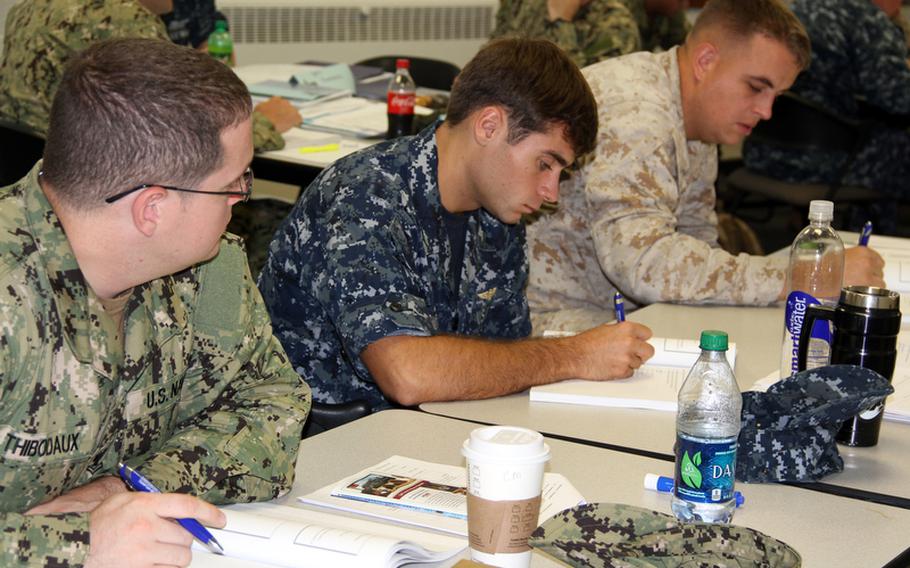 Transition Goals Planning Success, or Transition GPS, a program announced last summer to help departing servicemembers transition to civilian life, will be mandatory for most active-duty troops preparing to leave the service starting Nov. 21. The services held a series of pilots this summer to evaulate the program, including a resume class at Naval Station Norfolk, Va., in August. Seated from left were: Petty Officers 2nd Class Dusty Thibodaux and Kasey Schmidt, and Marine Corps Sgt. Joshua Johnston. (Terri Moon Cronk/Department of Defense)

KAISERSLAUTERN, Germany &mdash; As part of a White House initiative to ensure troops are &ldquo;career ready&rdquo; and prepared to apply their military experience to the civilian workforce, voluntary transition assistance programs will be mandatory for most servicemembers starting next month.

The Air Force announced it has already begun to roll out the new five-day reverse boot camp, dubbed collectively across the services as Transition Goals Planning Success, or Transition GPS, at a few stateside bases.

But attendance won&rsquo;t be required until Nov. 21, the date by which legislation makes participation mandatory for all but a few departing servicemembers, officials said.

By the end of January, the new program will be expanded to all Air Force installations, including those overseas.

&ldquo;The goal is to bring unemployment rates down and to ensure servicemembers are better prepared to find employment when they leave the services &hellip; to help them have a smoother transition,&rdquo; said Peggy Rayfield, Air Force Personnel Center chief of transition assistance operations.

The overhaul is the first significant change in the military&rsquo;s Transition Assistance Program in more than 20 years.

To implement the revised program, the Defense Department conducted seven pilots this summer, according to DOD officials.

&ldquo;Preliminary results indicate the piloted curriculums are hitting the mark,&rdquo; Susan Kelly, deputy director of Transition to Veterans Program Office, in the Defense Department Office for Personnel and Readiness, said last month in testimony before a House Committee on Veteran Affairs&rsquo; subcommittee.

Rayfield said the military services made similar &ldquo;tweaks&rdquo; across the board based on feedback from participants in the pilots. The Air Force, for example, expanded information on taxes servicemembers can expect to pay as civilians, she said.

Kelly said DOD plans to have the modified Transition GPS core curriculum in place by Nov. 21 for all the services.

The effort to better prepare departing servicemembers began in August 2011, when President Barack Obama mandated the creation of a joint DOD and Department of Veterans Affairs task force to work with the White House and other agencies to develop proposals to maximize troops&rsquo; career readiness.

In July, Obama announced a redesign of TAP, a reverse boot camp to help servicemembers transition to the civilian workforce, start a business or pursue higher education.

To support the program, the services, along with the Departments of Labor and Veterans Affairs, which also are responsible for portions of the new workshop, are hiring hundreds of additional staff.

Based on numbers provided to Congress by the VA, participation in the mandatory transition assistance workshops could double. When attendance at TAP briefings was voluntary, participation ranged from 134,626 servicemembers in fiscal 2009 to 147,718 in fiscal 2011. DOD anticipates approximately 307,000 servicemembers will separate annually over the next four years, according to Kelly&rsquo;s testimony.

Rayfield said the Air Force is still waiting for DOD to provide a list of who&rsquo;s exempt from the mandatory program. The exemption policy could include servicemembers unlikely to face major readjustment, health care, employment or other challenges associated with the transition to civilian life, Kelly testified.

While the new TAP curriculum is standardized and includes mandatory learning objectives, the services have the flexibility to modify the program to reflect their unique culture and mission, Kelly said.

&ldquo;They have lots and lots of skills that fit into the civilian community, but they don&rsquo;t recognize that because of the language &mdash; the language is so different,&rdquo; Rayfield said. &ldquo;When they speak to an employer, they need to be able to say how their skills fit into a civilian company.&rdquo;

A boom operator in the military, for example, is an aircraft refueling technician in the civilian world, whereas a military personnelist would describe his or her job outside the service as a human resources manager, Rayfield said.

The first overseas bases to get the program are Kadena Air Base on Okinawa, on Nov. 13, and RAF Lakenheath in the United Kingdom on Nov. 26, according to Rayfield.

Starting in fiscal 2014, the services will insert transition assistance planning early in a member&rsquo;s career. The Army, for example, will require all new soldiers to receive counseling pertaining to their educational and career goals within 30 days of reporting to their new duty station, Army officials said.