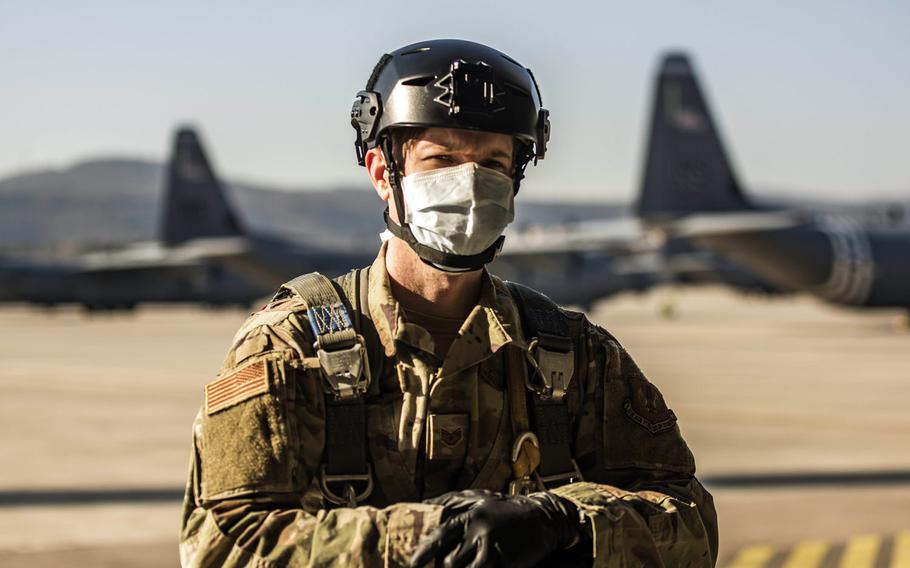 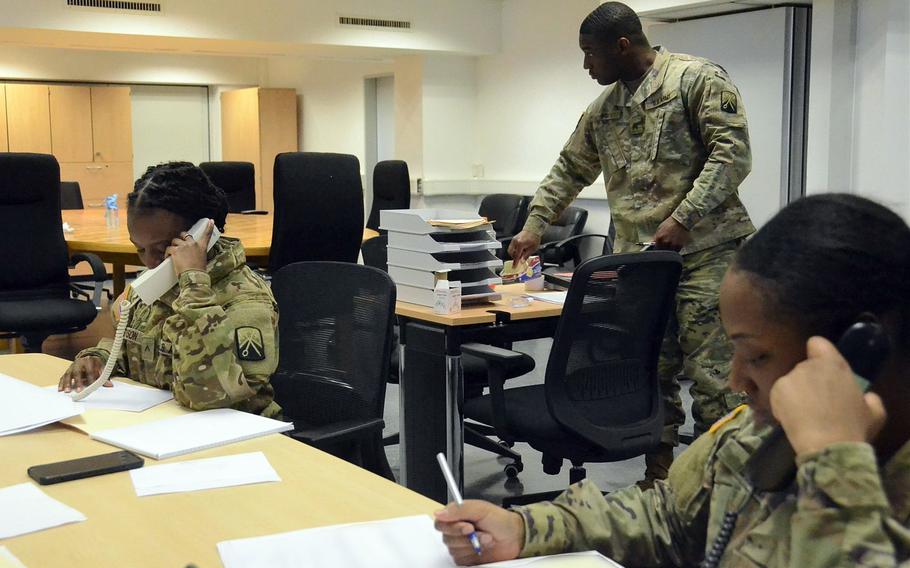 U.S. Army Team Trace members coordinate with their Air Force and host nation counterparts from the team’s operations center in Kaiserslautern, Germany. If a case of COVID-19 is diagnosed, members of Team Trace identify who the infected individual may have been in close contact with in the 48 hours prior to onset of symptoms. ( Stefan Alford/U.S. Army) 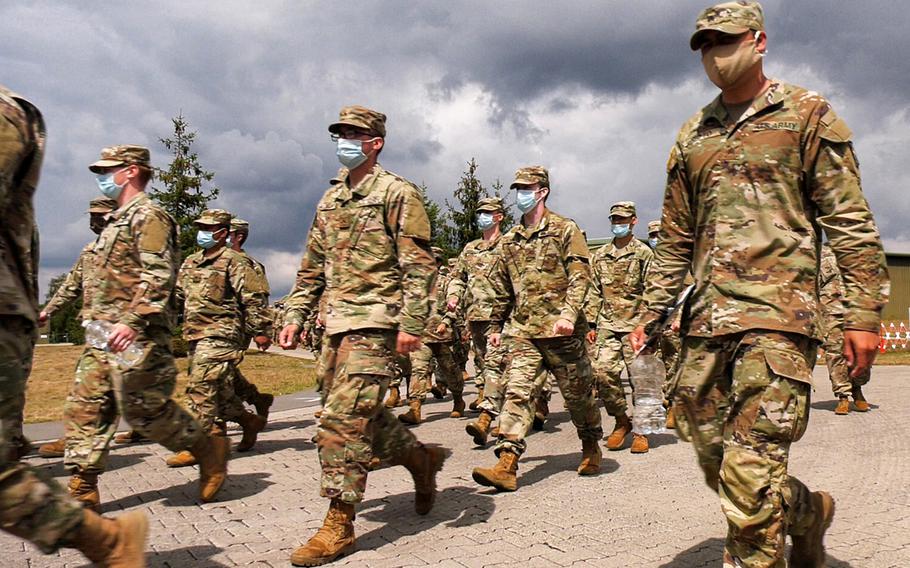 Soldiers, inbound from the United States to Europe, march to lunch at the Deployment Processing Center on Rhine Ordnance Barracks in Kaiserslautern, Germany July 17, 2020. All incoming personnel have to quarantine for two weeks, during which they are tested for the coronavirus. (Chris Jackson/U.S. Army) 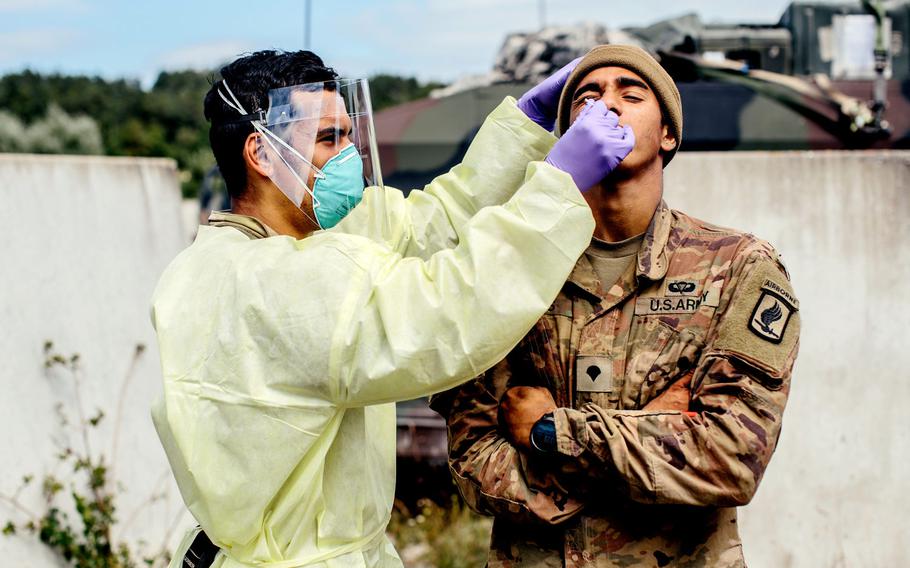 VICENZA, Italy — Real patriots wear masks. At least those in the military do.

Since the beginning of April, the Defense Department has required all troops, family members and civilian workers to wear masks in commissaries, base exchanges, offices, aircraft, ships, while on maneuvers and anywhere else they can’t stay 6 feet away from others to prevent transmission of the coronavirus.

“At the end of the day, it’s a rule; it’s part of the uniform,” said Maj. Chris Bradley, a spokesman for the 173rd Airborne Brigade, which recently tested and deployed thousands of paratroopers from Italy to Germany and back without a single case of the coronavirus.

There’s no federal mask-wearing mandate for American civilians, despite recommendations from the Centers for Disease Control for face-coverings and studies showing they reduce viral transmission by an average of 40%.

Mandating masks is just one way the military response to the pandemic has been more rigorous than that of the civilian community.

“Ultimately, it’s hard for a squad automatic weapons gunner to telework. We recognized the need for a culture shift in our operations to preserve readiness but also maintain our proper mitigation measures,” he said.

The brigade placed curfews on paratroopers, restricted travel, limited alcohol consumption and made bars and restaurants off-limits. “All of this helped to ensure our force was protected from exposure and, in the event of an outbreak, we limited the risk of spread,” Burgess said.

The active-duty force and reserve component number a little more than 2 million.

A direct comparison of the military versus the U.S. population for coronavirus infection and death rates isn’t possible for a number of reasons including the low mean age of service members compared to the population at large, the fact that service members are generally in good shape and able to fight off the virus, and stark differences in rates of testing for the virus. But, by way of comparison, New Mexico, where around 2 million people live, 26,268 people have tested positive for the virus and 813 deaths have been blamed on it.

“You don’t have too many 80-year-olds in the military’s population,” said Dr. Josh Sharfstein of Johns Hopkins Bloomberg School of Public Health. “The risk is going to be way lower. But if (the military) are able to do rapid testing and contact tracing, they’re definitely doing better than parts of the country.”

U.S. Army Garrison Italy tests all incoming personnel and their families during a mandatory two-week quarantine. The garrison also has a robust system to track and test close contacts of those found to have the virus.

In much of the U.S., in contrast, contact tracing has been stymied by the virus’s pervasiveness, long waits between testing and results, and contacts who can’t be located or are uncooperative.

“Since the military has such a critical mission to accomplish and has to do so in environments where you can’t control a lot, we’ve had to be more scrupulous maybe than our civilian counterparts,” said Col. Rodney Coldren, chief of Preventive Medicine Services at Public Health Command Europe.

The military also has “within our culture less of an individualistic and more of a protect-your-buddy ethos baked in,” he said.

It also feels it has the responsibility to avoid spreading the disease, he said. “Not only do we want to keep COVID out of our own populations but also those of our host nations,” Coldren said.

Testing continues to show “extremely low” levels of the virus within the Europe-based military community, he said.

With schools back in session and more people mixing, the military expects to see more cases — but it’s also confident of its response to the virus and that of the military community, he said.

“If people keep doing the right thing, we can get through this,” Coldren said.