Manchus not bothered by macabre temporary quarters in Iraq 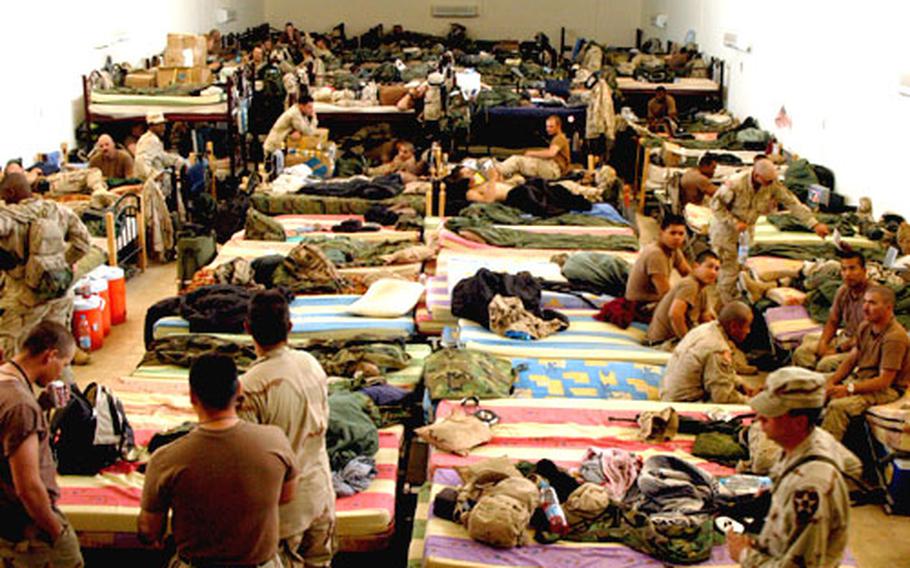 Manchus from 1st Battalion, 9th Infantry Regiment are living in a former morgue while they wait to move in to their barracks in Iraq. (Seth Robson / S&S)

Manchus from 1st Battalion, 9th Infantry Regiment are living in a former morgue while they wait to move in to their barracks in Iraq. (Seth Robson / S&S) WESTERN IRAQ &#8212; Soldiers from the 1st Battalion, 9th Infantry Regiment have found themselves in the somewhat macabre position of living in a former morgue while they wait to move into their barracks in Iraq.

The Manchus, part of the 2nd Infantry Division&#8217;s 3,600-strong 2nd Brigade Combat Team deployed to Iraq from bases in South Korea, are preparing to take over responsibility for a roughly 3,500-square-mile patch of Iraqi desert. Second Brigade officials have asked Stars and Stripes not to reveal, for security reasons, exactly where its units are operating.

The Manchus arrived at their base in Iraq last week but are waiting for another unit to move out of the barracks they will occupy during their yearlong stint in the desert.

Nearly 100 soldiers from 1-9&#8217;s Headquarters and Headquarters Company are living in a building that, until recently, was used as a morgue. For the most part, the soldiers are not concerned about sleeping in a morgue, said one HHC soldier, Pfc. Chris Meleo, 20, of Lakeville, Mass.

Another HHC soldier, Pfc. Joshua Lewis, 24, from Detroit, also doesn&#8217;t mind sleeping in the morgue, saying there are more tangible things to worry about.

What the Manchus really would like are better shower facilities, Lewis said.

&#8220;The shower facilities are not what they could be. There is very little water. Hardly enough to wash yourself,&#8221; he said.

In the meantime, soldiers are doing what they can to make themselves at home in their morgue-turned-living space.

Inside, so many cots and bunks mean there is barely room to walk. At one end of the room, hundreds of mattresses are piled one on top of another.

The Manchus have each commandeered at least two mattresses, which they have placed on top of their cots to make themselves more comfortable at night.

Meleo said he climbed to the top of the mattress stack to retrieve his bedding.

Next door to the morgue, soldiers from 1-9&#8217;s Company C were bolting armor onto their Bradley fighting vehicles.

Two Company C soldiers, Sgt. John Eimers, 24, of Chicago and Spc. Andrew Palmieri, 24, of San Diego, spent hours working in the hot sun to put the armor on their Bradley, which they call the &#8220;Myrth Mobile.&#8221;

The armor contains shape charges designed to blast back at weapons such as rocket-propelled grenades if they strike the vehicle, Eimers said.

The whole process of fitting the armor takes 12 hours over two days, he said.

&#8220;We loosen bolts and take components off and bolt the armor on. We have to use gloves. You could burn yourself because it heats up in the sun. The tools are enough to burn you, let alone the armor,&#8221; he said.

And then there&#8217;s a touch of amusement present around the former morgue.

While they prepare to battle insurgents, the young soldiers are competing with each other to see who can grow the best mustache.

Eimers, who is experimenting for the first time with facial hair, started growing his mustache the day he left South Korea. Palmieri, who had a goatee before joining the Army, followed suit after arriving in Kuwait, where Strike Force stopped on the way to Iraq.

The only member of their Bradley crew who is not growing a mustache is their commander, they said.

Army regulations have limited the scope of the mustache competition since they prevent soldiers from growing elaborate facial hair, such as handlebar mustaches, Eimers said. The pair are keeping their mustaches carefully groomed to avoid breaking the rules. Palmieri has a mustache trimmer, but Eimers makes do with a disposable razor.

The hirsute warriors have already attracted attention in their unit. Eimers said fellow soldiers have commented that his mustache is reminiscent of Adolf Hitler, actors Burt Reynolds and Charlie Chaplain, and &#8220;Hank&#8221; &#8212; actor Jim Carrey&#8217;s character in the movie &#8220;Me, Myself and Irene.&#8221;