Manchu Sappers join in training on use of grenade launchers, C-4 explosives 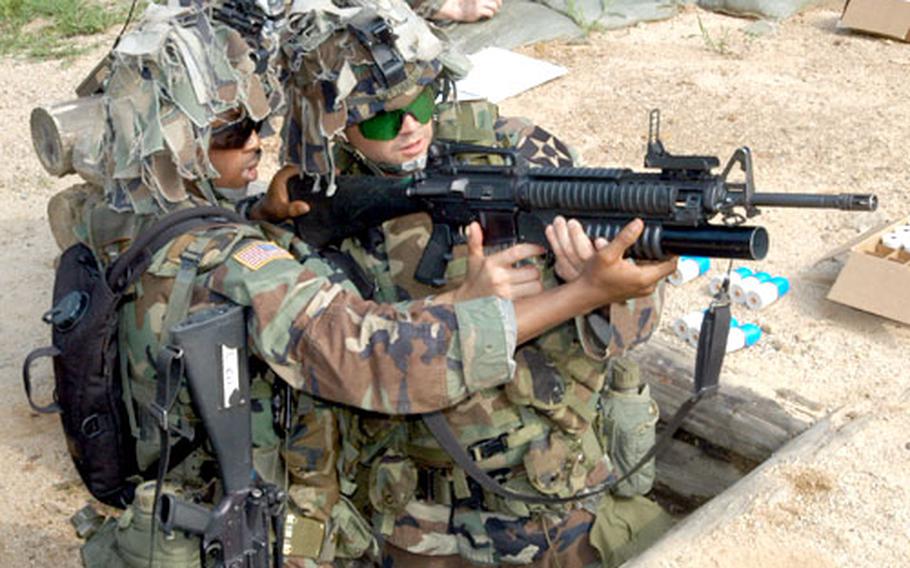 RODRIGUEZ RANGE, South Korea &#8212; When infantry needs to breach an obstacle, blow up a bridge or storm a building they call in sappers.

And these days the sappers are always close at hand for reorganized U.S. Army units such as 2nd Battalion, 9th Infantry Regiment, 2nd Infantry Division.

In December the battalion, known as the Manchus, became one of the first in the Army to have a company of sappers permanently assigned to it.

This week 2-9&#8217;s Company E &#8212; the Manchu Sappers &#8212; trained at Rodriguez Live Fire Complex with the rest of the battalion, which is conducting sustainment gunnery that includes its M1A1 Abrams Main Battle Tanks, Bradley Fighting Vehicles and soldiers qualifying on M-16 rifles and various other weapons.

On Wednesday, the sappers were at the Cherokee Valley Range learning to fire M-203 grenade launchers mounted on M-16 machine guns as well as using C-4 explosive to cut steel and wood and detonation cord to break down doors.

Previously, the engineers would join the battalion during training exercises or deployments. Now that they are permanently assigned to the unit, the sappers live and train with the infantry daily. As members of 2-9 the sappers wear the distinctive jungle-style Manchu headdress and repeat the Manchu motto &#8220;Keep up the fire,&#8221; he said.

&#8220;We have soldiers not assigned [to the M-203] getting experience firing the weapon in event one of their comrades goes down in combat,&#8221; said Hagio as soldiers from behind sandbags fired M-203 training rounds at targets.

Pfc. Matt Wienczkowski, 22, of Grand Rapids, Mich., was eager to get hold of a grenade launcher and start putting rounds downrange.

&#8220;A lot of people think C-4 is just for explosions but it is a cutting tool as well. The soldiers recon the tree or the steel. We have formulas based on size and composition to calculate the amount of C-4 needed to cut,&#8221; Hagio said.

They also trained for &#8220;military operations in urban terrain&#8221; by blowing open doors to a plywood building on the range.

Company E commander Capt. Brian Smith, 33, of Queens, N.Y., said the demolition training involves some of the basic skills of a combat engineer.

&#8220;Learning to prime explosives is something they need to learn to breach obstacles, remove mines or force entry. That is becoming prevalent now in Iraq and Afghanistan,&#8221; he said.