A KC-135 crew goes over some pre-flight discussions before preparing the aircraft for flight. The mission at Manas Air Base is critical to refueling fighter jets over the skies of Afghanistan. (Les Neuhaus / S&S)

A KC-135 crew goes over some pre-flight discussions before preparing the aircraft for flight. The mission at Manas Air Base is critical to refueling fighter jets over the skies of Afghanistan. (Les Neuhaus / S&S) A firefighting competition allows other Air Force personnel to test their mettle in a hose competition against military firefighters on Manas Air Base on Sunday. The competition pitted teams against each other in a test to control the water pressure from the hose to push a heavy canister across a cable. (Les Neuhaus / S&S) 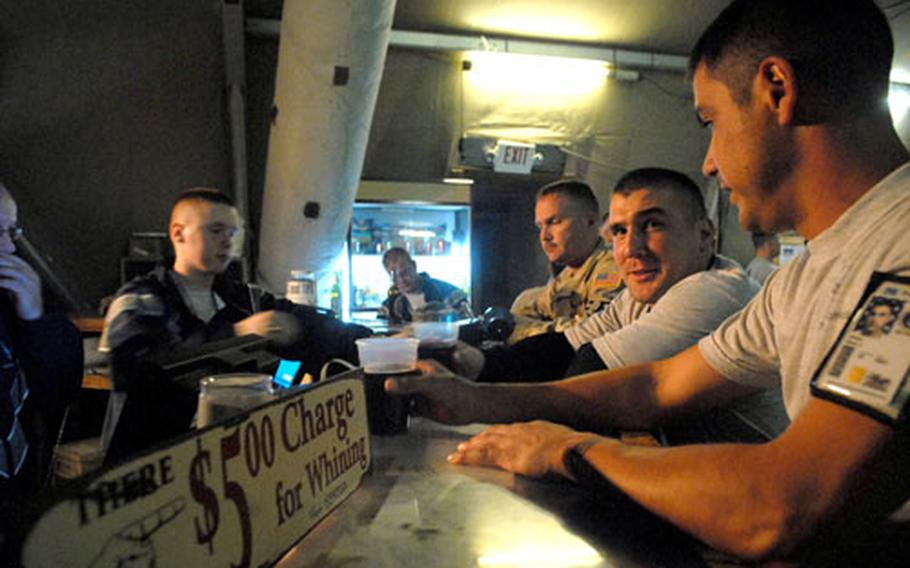 Airmen get a couple of drinks from the bar at Pete&#39;s Place on Manas Air Base. The establishment has a two-drink maximum for all servicemembers. (Les Neuhaus / S&S) 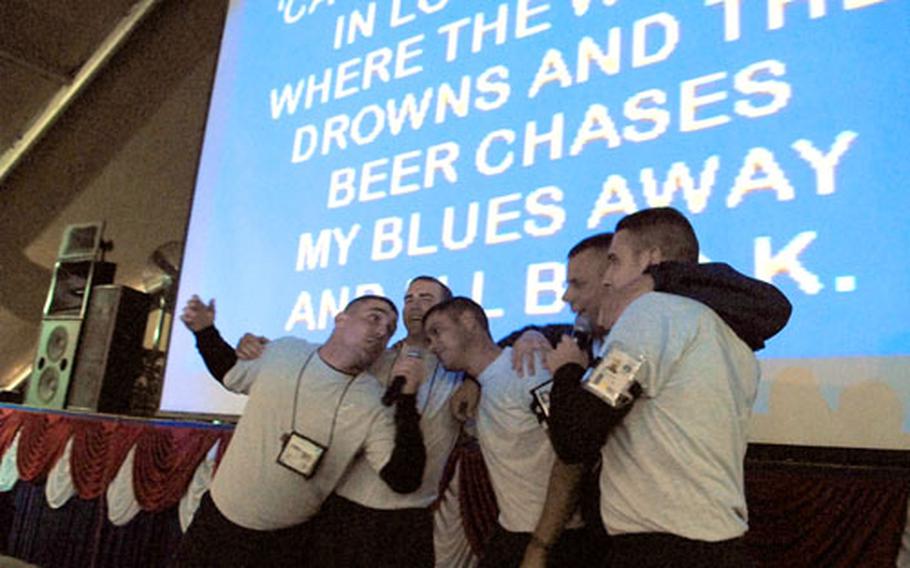 Customers sing a ditty at Pete&#39;s on karaoke night, a popular diversion on Manas Air Base. (Les Neuhaus / S&S) 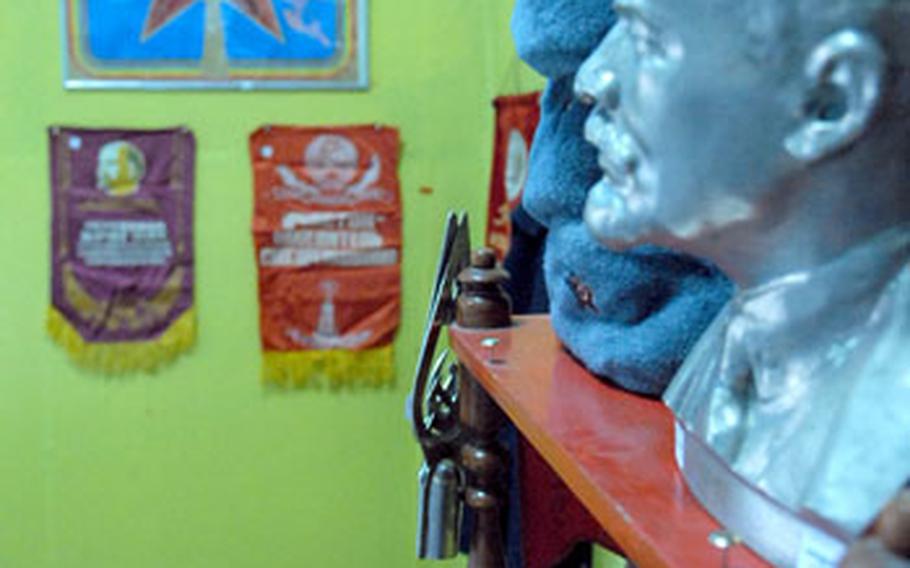 A bust of Vladimir Ilyich Lenin rests atop a shelf along with other trinkets at a gift shop in a cafe on Manas Air Base, Kyrgyzstan. (Les Neuhaus / S&S)

MANAS, Kyrgyzstan &#8212; When U.S. Army Air Corps Capt. Robert Crawford wrote what would later become the &#8220;U.S. Air Force Song&#8221; in 1939, he surely could not have imagined just where, in the wild blue yonder, airmen would serve in the decades to come.

The Kyrgyz Republic has proved to be one of those places where Americans now serve, reaching ever-farther into the remotest of the world&#8217;s corners.

The Wenatchee, Wash., native is on his fourth 60-day tour of duty in the country, flying missions over the skies of Afghanistan which help keep fighter aircraft aloft. Sandwiched between Kazakhstan and Tajikistan to the north and south and Uzbekistan and China to the west and east, Kyrgyzstan serves as home to the U.S. military&#8217;s most strategic air base in Central Asia.

It is also the main filtering point for troops and supplies heading into the war in Afghanistan &#8212; which marked its sixth anniversary on Sunday.

At the heart of Manas Air Base&#8217;s mission is the refueling effort, which helps complement the ferrying of servicemembers carried out by U.S. and NATO aircraft.

Coordinated under the 376th Air Expeditionary Wing, led by Air Force Col. T. Harrison Smith Jr., a combination of C-17 logistics and KC-135 refueling aircraft make up the bulk of the mission&#8217;s fleet, flying dozens of missions per day.

Though the pilots of the 22nd Air Refueling Squadron, a part of the 376th Wing, may not be dropping bombs, their mission is just as important, argues their leader.

Rules are now tighter for servicemembers wanting to venture off base since September 2006, when Air Force Maj. Jill Metzger, a champion marathon runner on temporary assignment to Kyrgyzstan, vanished for nearly 72 hours. When she re-emerged, her hair had been cut short and was dyed brown. Brown dye stain was on her hands.

U.S. Justice Department and FBI agents investigated the case, and Kyrgyz law enforcement authorities were skeptical of her strange tale of having been held hostage after a note and object, she claimed, were put into her pockets while on an organized shopping tour in Bishkek, the capital. The note said a bomb would be blown up if she did not follow the instructions.

Smith and others declined to comment on the subject in interviews, saying that neither he nor any of the other personnel currently on base were stationed at Manas during the incident. But privately, airmen and officers alike complain about the restrictions erected since the episode.

And while some troops are held up for days waiting on flights, it&#8217;s not a bad place to be holed up.

Manas hosts a wide range of activities &#8212; everything from a pool hall to a beer tent, where there is a two-drink maximum.

And the 1,200 servicemembers temporarily stationed here &#8212; including NATO personnel from Spain, Poland and France, and even a new addition from South Korea &#8212; have the opportunity to explore the former Soviet-satellite country through organized tours into the capital. Other tours, such as hiking and trout fishing, are also available.