Man-yi spares Sasebo, gets weaker on the way to Tokyo 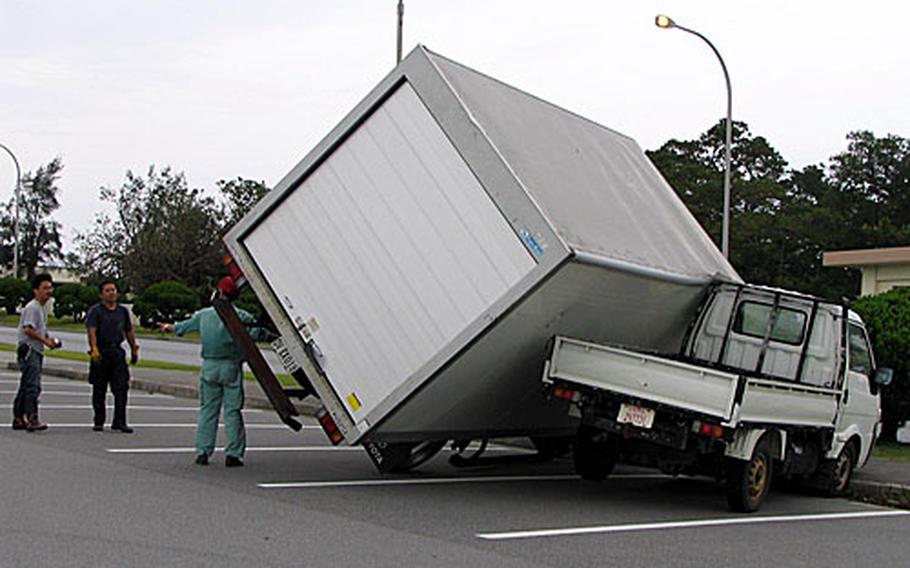 Workers on Kadena Air Base examine a van that toppled into a pickup truck by the strong winds of Typhoon Man-yi Friday in the commissary parking lot. (David Allen / S&S)

Bases on the Kanto Plain entered Tropical Cyclone Condition of Readiness 1 Saturday evening as Typhoon Man-yi barreled toward the rain-soaked region, while Sasebo residents breathed a sigh of relief when Man-yi failed to deposit even a drop of precipitation there.

At Yokota Air Base steady rains without winds continued throughout Saturday evening, while earlier in the day large waves were seen by onlookers crashing on the shores of Zushi Beach&#8217;s normally calm waters, roughly seven miles from Yokosuka Naval Base.

Earlier Saturday, Typhoon Man-yi curved some 115 miles southeast of Sasebo Naval Base and spared it the fury unleashed Friday on Okinawa in the form of 105 mph gusts and nearly 15 inches of rain.

But Sasebo, expecting at least some of Man-yi&#8217;s wrath, instead experienced some gusts and &#8220;no rain whatsoever,&#8221; base spokesman Chuck Howard said.

Man-yi rumbled past Iwakuni at 10 p.m. Saturday, 117 miles to its southeast. Sustained 40 mph winds and 58 mph gusts were forecast overnight.

While Sasebo escaped Man-yi&#8217;s wrath, other parts of Kyushu and elsewhere weren&#8217;t so lucky.

Forecasts called for Man-yi to dump 27 inches of rain in Miyazaki and Kagoshima prefectures and 20 inches elsewhere on Kyushu into Sunday, the Asahi Shimbun reported. Kyushu is already beleaguered by seasonal monsoons that have caused landslides and home damage.

Osaka, Kyoto and other areas of central Japan were forecast for more than 15 inches of rain and more than 13 was expected in the Tokyo area, Japan&#8217;s NHK television news reported.

At least 50 injuries have been blamed on the storm through Saturday afternoon in Kyushu, Okinawa and Yamaguchi prefecture. Evacuation was ordered for 8,587 homes in Miyazaki, 5,882 in Kagoshima, 120 in Kumamoto, 197 in Oita and 245 in Koichi prefectures. About 14,000 people in Kyushu, Shikoku and Kinki evacuated voluntarily, NHK reported.

Five homes in Kagoshima Prefecture were destroyed and 36 damaged in Okinawa and Miyazaki prefectures. Flooding occurred in 145 homes in Miyazaki, 29 on Okinawa, 19 in Kagoshima, nine in Kochi and one in Kumamoto, according to NHK.

Though flights serving Naha International Airport resumed Saturday with some delays, Okinawa wasn&#8217;t completely out of the woods, weather-wise. Rain continued throughout the day, with more forecast for Monday and Tuesday. About 13,600 homes on Okinawa and its outlying islands remained without power, Asahi reported.