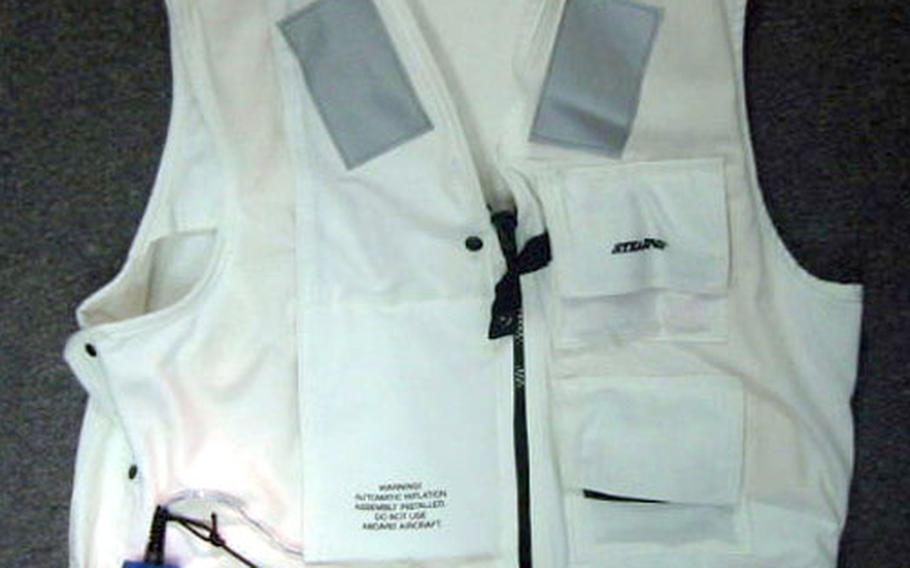 A small transmitter — bottom left of image — can be attached to the MK1 float coat to help ships find sailors who have fallen overboard. (Courtesy of U.S. Navy)

The Navy is investing about $30 million for a system to speed up recovery of sailors who fall overboard.

Twenty ships on recent deployments tested the Man Overboard Indicator and provided feedback on whether they thought the devices should be installed fleetwide.

&#8220;One hundred percent of the ships responded that they were in favor of putting a MOBI system on board Navy ships,&#8221; said Don Neuman, MOBI program manager at Naval Sea Systems Command.

Currently, rescuers rely on sight when a sailor falls overboard. They scan the waters for a flashing strobe light, reflective tape on a life jacket or survival-pack dye.

The MOBI system relies on technology. Its transmitters will be attached to float coats on more than 200 ships fleetwide (with the exception of submarines) starting in November.

The pager-size transmitter&#8217;s beacon activates within three seconds of submerging in salt water. A data receiver on the ship&#8217;s bridge picks up the signal and emits an alarm.

A direction finder, usually on the bridge and on a recovery boat, also picks up the signal.

About 70,000 transmitters will be installed in float coats. Each ship will receive two receivers and three direction finders.

The installation should take about three years, said Chuck Collins, director of operations for BriarTek Inc., the company which developed the product for the Navy.

The devices are being modified based on sailors&#8217; feedback.

&#8220;They&#8217;re making it smaller, less obtrusive and improving the water tightness of some of the systems so they would better withstand the rigors of being at sea,&#8221; Neuman said.

A Global Positioning System capability that will pinpoint a sailor&#8217;s position upon hitting the water also is being incorporated.

The original design had a push-button manual activator that, if hit just right, would set off an alarm. The new design will feature a flip-switch.

All of the devices will be saltwater-activated. Sailors reported that fresh water, such as rain, set off some alarms.