Man dies after fight with American at Yokosuka bar 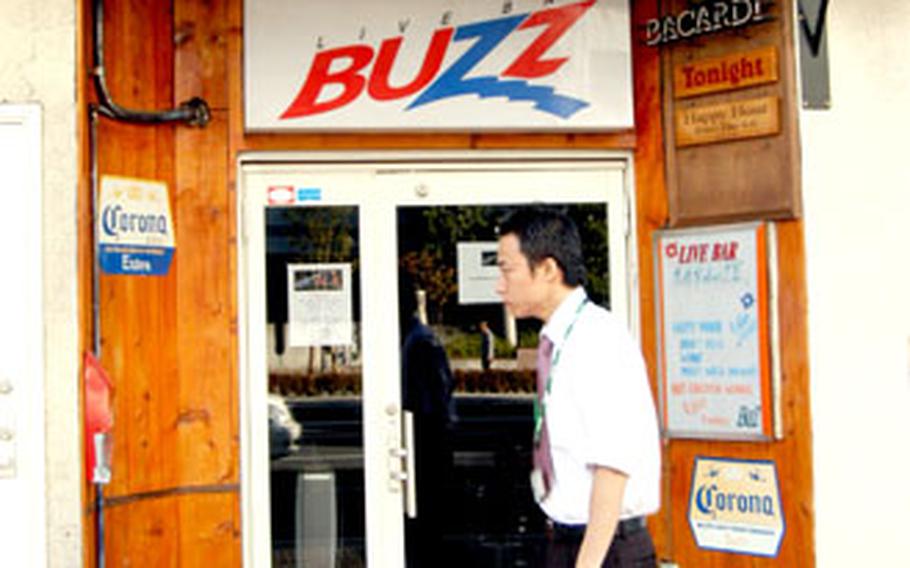 A man walks by Live Bar Buzz Tuesday where a 70-year old Japanese man sustained injuries last Thursday night. The man died in a Yokosuka hospital Tuesday and a U.S. Navy civilian is in Japanese police custody as a suspect. (Allison Batdorff / S&S)

YOKOSUKA NAVAL BASE, Japan &#8212; A 70-year old Japanese man died Tuesday morning from injuries suffered during an altercation last week with a high-ranking U.S. Navy civilian in a Yokosuka bar.

Katsumi Nakagawa died in Yokosuka at 6:24 a.m. Tuesday after being hospitalized since the Nov. 2 incident outside Live Bar Buzz, two blocks from Yokosuka Naval Base.

Nakagawa died from a head injury received in the bar incident, Yokosuka police officials said Tuesday evening, citing an autopsy report. Police said they now will investigate the case as one of bodily injury resulting in death. In Japan, conviction on that charge carries a three-year minimum prison term with a maximum of 20 years.

As of Tuesday night, no charges had been filed against the 54-year-old suspect, Robert Burns Nolan, who remained in Japanese police custody Tuesday.

Nolan, a GS-14, works at Yokosuka Naval Base as the Commander, Naval Forces Japan personnel management officer. Police arrested him Friday after he was accused of pushing Nakagawa out of the bar about 6:40 p.m. the previous evening.

A Yokosuka police spokeswoman told Stars and Stripes on Friday that Nakagawa was drunk, causing a ruckus in the bar, and that he &#8220;had come to the bar several times causing trouble.&#8221;

As manager of the bar, Nolan reportedly took Nakagawa outside and pushed him, the police spokeswoman said.

Nakagawa suffered a fractured skull and a brain hemorrhage. On Friday, he was conscious but in serious condition, the spokeswoman said.

The Naval Criminal Investigative Service and the Japanese police are working together on the investigation, said CNFJ spokesman Jon Nylander.

Every aspect of the case, including the status of Nolan&#8217;s off-base employment, is being investigated, CNFJ spokesman Cmdr. David Waterman said Tuesday.

In a written statement, the Navy also extended &#8220;its deepest sympathies to the family of Mr. Nakagawa.&#8221;

Yokosuka city officials also &#8220;expressed regret&#8221; but declined to comment on the case. City officials said they had no plans as of Tuesday to submit a letter of protest to the Navy.

Protest letters are common when American servicemembers are accused of committing crimes off base in Japan. Earlier this year, the Jan. 3 robbery and murder of a 56-year-old Yokosuka woman by a USS Kitty Hawk airman prompted a flurry of protests and official apologies.

A city meeting following the woman&#8217;s death prompted the upcoming Nov. 13 &#8220;Honch patrol&#8221; where CNFJ commanding officer Rear Admiral Jamie Kelly, base commanding officer Capt. Greg Cornish and Yokosuka Mayor Ryoichi Kabaya will examine the safety situation around Yokosuka Chuo station and the Honch, the entertainment district outside the base.

On base, there are no plans for a &#8220;stand down&#8221; or restricted liberty for base personnel, Nylander said.