Malaria’s a dangerous, unrelenting foe for troops deployed around the world 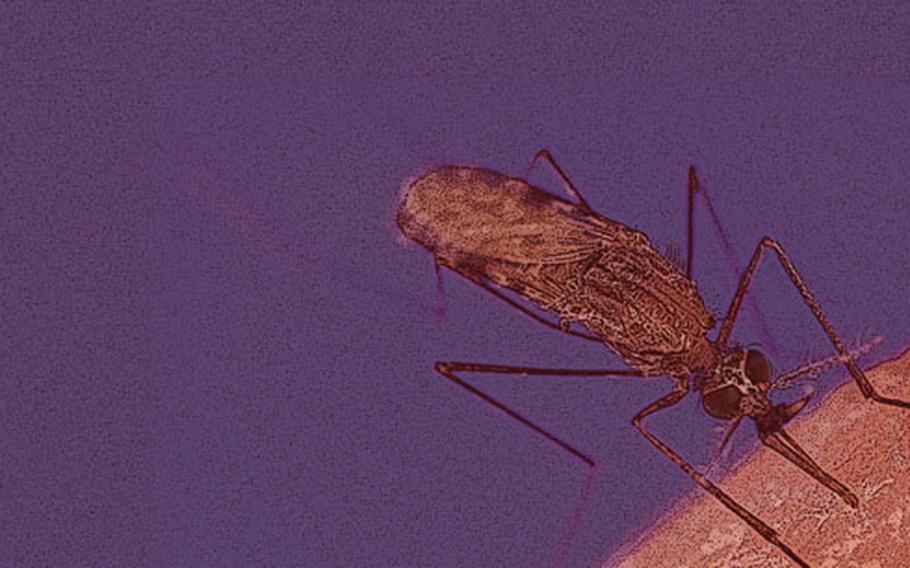 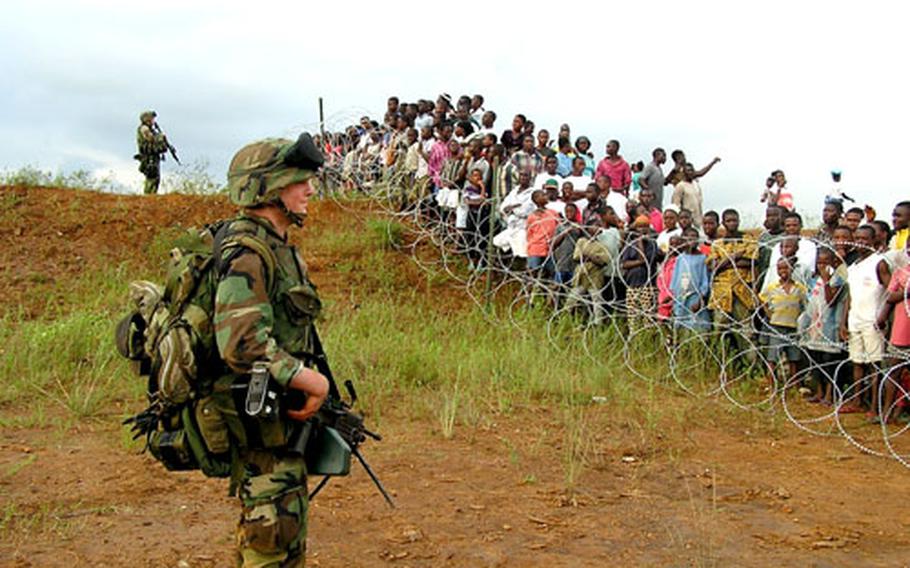 Marines watch refugees moving along a concertina wire in Liberia in August 2003. Nearly one-third of the U.S. personnel who landed were treated for malaria. (Thomas Collins / U.S. Army)

It&#8217;s not the Iraqi insurgency. Nor is it al-Qaida terrorists.

Those blood-sucking insects can infect hosts with potentially deadly malaria. And now is peak season: From March to November, troops in such areas as the Middle East, Afghanistan, Africa and South Korea are susceptible to catching the disease.

&#8220;For the soldier who deploys to an endemic area the threat is very real and needs to be taken seriously,&#8221; said Col. Kent Bradley, chief of primary care/preventive medicine at Landstuhl Regional Medical Center in Landstuhl, Germany.

&#8220;It is a disease that has been around almost since antiquity and has been a real cause for potential lost duty days and, worst-case scenario, even death to U.S. soldiers,&#8221; he said.

Since 2001, about 80 servicemembers a year have come down with malaria &#8212; most of them soldiers. In the past decade, cases of malaria among U.S. troops have risen, primarily due to infections acquired in South Korea.

A couple of outbreaks in recent years served as a reminder of the threat:

In 2002, 38 Army Rangers contracted malaria while serving in eastern Afghanistan.In 2003, 79 U.S. troops, mostly Marines, and one civilian were treated for malaria contracted during a peacekeeping mission in Liberia.All the Rangers and Marines in those cases survived. But an Army Special Forces soldier died in Puerto Rico in 2001 after contracting malaria during a deployment to Nigeria. Twelve other malaria cases among the fallen soldier&#8217;s unit were reported from that outbreak, which apparently could have been prevented. An unclassified executive summary states that the outbreak was caused by &#8220;non-compliance with routine protective measures against malaria.&#8221;

To protect against such outbreaks, the military recommends anti-malaria drugs and other protective measures only when the threat is real. Otherwise, troops may not take the warnings seriously.

&#8220;We try not to get too excited about things when there&#8217;s not a large risk, so that when we do make a recommendation that you take the prophylaxis (anti-malarial medication), they do,&#8221; said Maj. James Mancuso, chief of epidemiology for the U.S. Army Center for Health Promotion and Preventive Medicine-Europe.

Such is the case in Iraq, where some 135,000 troops make it the largest concentration of U.S. forces deployed. In December 2004, the military decided not to require troops to take anti-malarial medication because the threat is minimal, Bradley said.

Bradley remembers just one case of a servicemember contracting malaria since the beginning of Operation Iraqi Freedom. That soldier arrived in Iraq from South Korea and developed malaria.

Among soldiers deploying from Europe, the most common area where they are prescribed anti-malarial medication is Afghanistan, Bradley said.

&#8220;For two reasons, the prevalence there is high enough to be of concern as a risk to our soldiers and because the type of malaria parasite there,&#8221; he said.

U.S. troops also make regular forays into Africa, including an exercise this month called Flintlock 05, in which 1,000 troops are training in seven African nations.

To avoid falling prey to malaria, troops are prescribed anti-malaria medications, uniforms are treated with the insect repellent Permethrin, insect spray containing DEET is distributed and, in some cases, mosquito netting is allotted.

In Niger, where members of the U.S. European Command are training Nigerien troops, soldiers are taking one of two types of anti-malarial drugs. Side effects have been minimal, but for two soldiers, taking mefloquine made their sleep more interesting.

On visits to clinics in Tahoua, Niger, where Team Niger is working, the two most-requested medicines are antibiotics and anti-malaria drugs, Haque said.

It would be a poor risk not to take malaria medication when deployed to an at-risk area, he said.

What is it? Malaria is a serious and sometimes fatal disease caused by a parasite. It is a leading cause of death and disease worldwide, especially in developing countries.

The World Health Organization estimates that each year 300 million to 500 million cases of malaria occur, and more than 1 million people, mostly young children, die from it.

Where do you get it? Malaria occurs in more than 100 countries and territories in Africa, the Middle East, Southeast Asia, the Indian subcontinent, large areas of Central and South America, Hispaniola (the Caribbean island that is divided between Haiti and the Dominican Republic) and Oceania.

What does it feel like? Fever and flu-like illness, including shaking chills, headache, muscle aches and tiredness. Nausea, vomiting and diarrhea may also occur. Malaria may cause anemia and jaundice (yellow coloring of the skin and eyes) because of the loss of red blood cells. Infection with one type of malaria, Plasmodium falciparum, if not promptly treated, may cause kidney failure, seizures, mental confusion, coma and death.

Symptoms usually begin 10 days to four weeks after infection, although a person may feel ill as early as seven days or as late as one year later.

How do you prevent it? Taking prescribed medications, wearing permethrin-inpregnated uniforms, spraying exposed skin with insect repellant containing DEET and &#8212; when provided &#8212; placing mosquito nets around you while sleeping.

How do you treat it? The most common anti-malarial medication prescribed to troops is Doxycycline. Side effects include upset stomach, increased sensitivity to the sun and allergic reaction.

The alternative anti-malarial medication is mefloquine, which is also known as Larium. However, people with psychiatric problems should not take mefloquine, as its side effects include thoughts of killing or harming yourself. The Department of Defense issued a directive stating that prior to being prescribed mefloquine, troops should be screened for psychiatric issues.

In August 2003, a joint task force deployed to the West African nation of Liberia to participate in a peacekeeping mission. Of the 290 who went ashore, 79 U.S. troops and one civilian were treated for malaria &#8212; nearly one-third of the personnel who landed.

Four of those infected required treatment in an intensive care unit.

&#8220;Some were very, very sick,&#8221; said Maj. James Mancuso, chief of epidemiology for the U.S. Army Center for Health Promotion and Preventive Medicine-Europe. &#8220;It really was not certain that all of them were going to make it, but they did.

The Marines were not taking mefloquine &#8212; their prescribed once-a-week, anti-malarial medication &#8212; as scheduled.Insect repellent containing DEET was available but was not routinely used.Uniforms treated with permethrin, an insect repellent, were not available in adequate numbers.Bed nets were not used because of net design and mission requirements.The report admitted that the malaria prevention regimen is complex and difficult to implement. However, the report concluded that U.S. forces can deploy to high-risk malaria areas without suffering a similar outbreak if the prevention policies and measures are routinely applied.

&#8220;This outbreak highlights that when you go to an area that&#8217;s endemic for malaria, the risk is real and all you need to do is be infected by that mosquito,&#8221; said Col. Kent Bradley, preventive medicine consultant with Europe Regional Medical Command.

&#8220;You can come down with malaria, and it can basically make your unit non-mission capable very quickly.&#8221;