Making the best of a Spartan situation 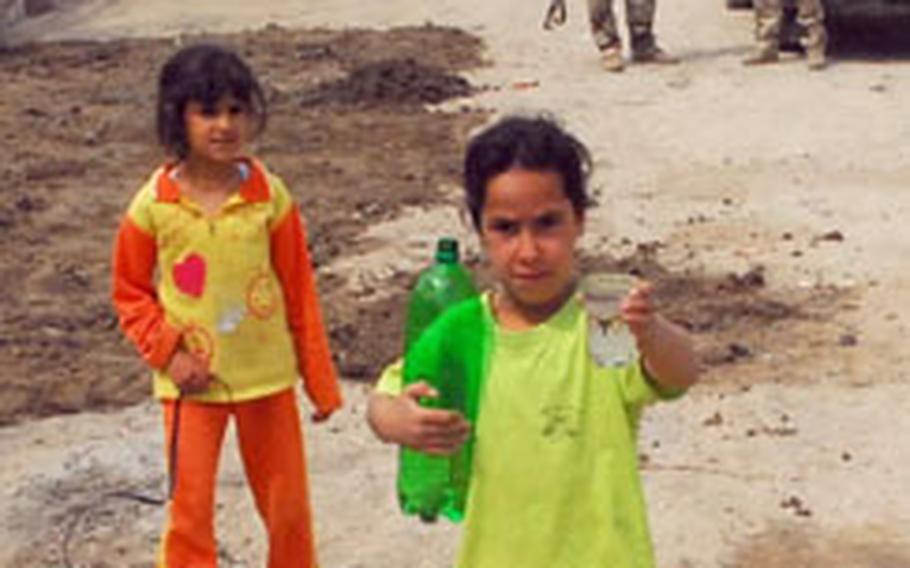 A young Iraqi girl offers a glass of water to a joint patrol of U.S and Iraqi soldiers in the Zafaraniyah neighborhood of east Baghdad recently. (Monte Morin / S&S)

A young Iraqi girl offers a glass of water to a joint patrol of U.S and Iraqi soldiers in the Zafaraniyah neighborhood of east Baghdad recently. (Monte Morin / S&S) 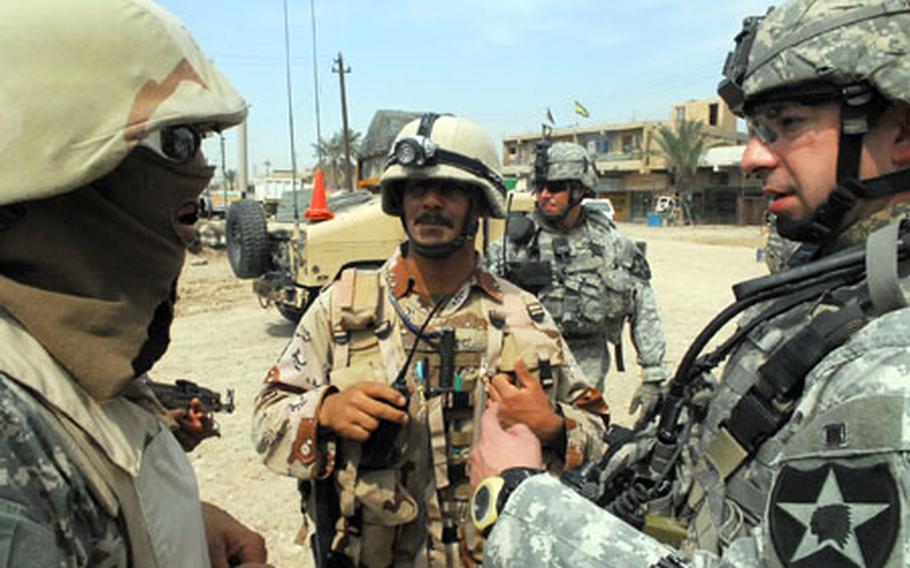 1st Lt. Jonathan Martin, right, speaks to an Iraqi Army soldier through an interpreter, left, during a joint Baghdad security plan patrol recently. The interpreter, an Iraqi, has covered his face because he is worried that he or his family will be targeted for assassination if he is recognized by insurgents. (Monte Morin / S&S) 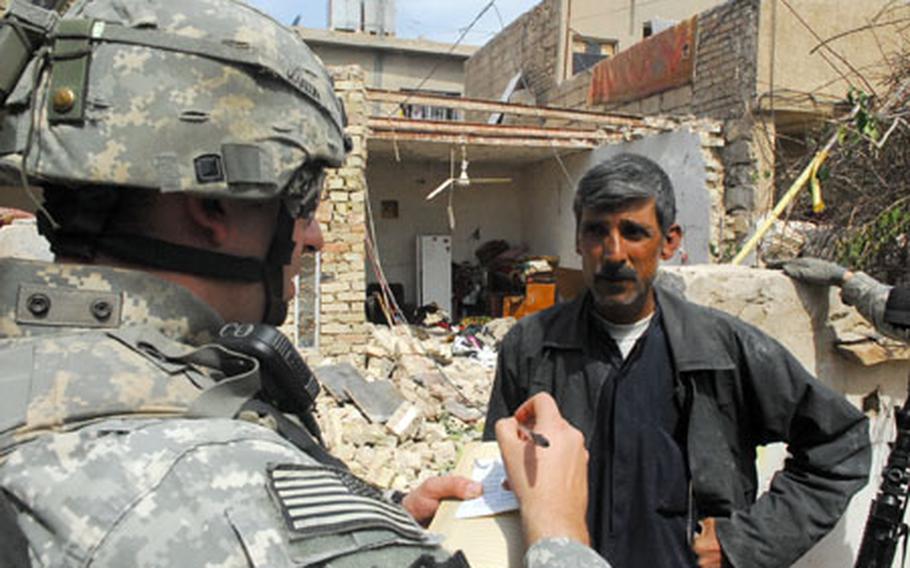 1st Lt. Jonathan Martin, 25, of Independence, Mo., interviews a man about a house that mysteriously exploded during the night in the Zafaraniya neighborhood of eastern Baghdad recently. Soldiers concluded that the small, unoccupied house was hit by a mortar. (Monte Morin / S&S) 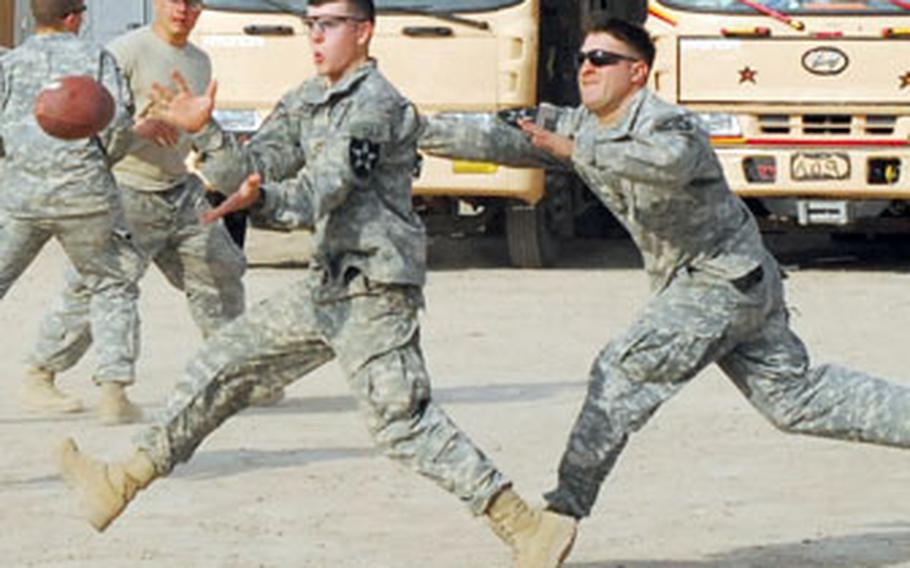 BAGHDAD &#8212; With the push to secure Iraq&#8217;s capital entering its second month, U.S. soldiers are enduring longer days and fewer creature comforts as they venture from their forward operating bases and take up positions alongside Iraqi soldiers and police throughout Baghdad.

Hot chow, mattresses, Western toilets, running water, telephones and the Internet are a few of the luxuries U.S. troops are shedding as Gen. David H. Petraeus implements a new Baghdad security plan, the third such attempt in a year&#8217;s time to quell sectarian violence here.

The hardships are most heavily felt by those battalions now paired with Iraqi army units under the military&#8217;s new counterinsurgency doctrine.

Instead of staging raids and patrols from large U.S. camps, these troops are joining up with Iraqi soldiers and conducting operations and patrols from small combat outposts, government centers and joint security stations throughout the city for days at a time.

While soldiers in areas like Baghdad&#8217;s Karada security district say the strategy appears to be working, some voiced frustration over the drop in their standard of living.

The Humvee was part of a platoon heading for a three-day stint at a nearby joint security station. For the next several days, the platoon&#8217;s meals would consist mostly of pre-packaged Meals, Ready to Eat.

For roughly two months, battalion soldiers have been rolling out into sector for three or five days at a stretch, conducting a variety of patrol, quick reaction and guard duties alongside Iraqi army soldiers and police.

In the Karada security district, a predominantly Shiite area in Baghdad&#8217;s southeast, the strategy appears to be very effective. Incidents of mortar, rocket and roadside bomb attacks &#8212; particularly those involving extremely powerful explosively formed projectiles, or EFPs &#8212; as well as execution-style murders have fallen drastically.

Martin&#8217;s platoon spent the last several days responding to a variety of incidents, rolling, like heavily armed police, through the streets of the Zafaraniyah neighborhood and bedding down on dusty cots at the Zafaraniyah Government Center and Joint Security Station.

In most cases, outposts like these come with none of the amenities found at garrison-like forward operating bases. Commanders say the change is toughest on first-time deployees &#8212; that generation of young soldier who packs their iPod and laptop for war and is rarely separated from the Internet for more than a couple days at a time.

But for those soldiers who served during the initial invasion, or the first Gulf War, the experience is like a blast from the past.

Officers say they are working on making the joint security stations and combat outposts more livable.

&#8220;We&#8217;re trying to increase the standard of living, trying to make it more like home,&#8221; said Capt. Christian Schleider, the battalion&#8217;s supply officer. Schleider, who puts in time at the Zafaraniyah JSS as a battle captain, said plans were in the works to bring showers, Internet and gym equipment to the Spartan station.

Earp said that was great, but he wasn&#8217;t holding his breath.

Despite the inconveniences, soldiers said they would make do.

Rolling into the Zafaraniyah Government Center after a patrol recently, soldiers from 1st Platoon broke out a football and began a spirited game of touch football. For more than an hour, soldiers laughed and joked as they kicked up clouds of dust. The war seemed far, far away.