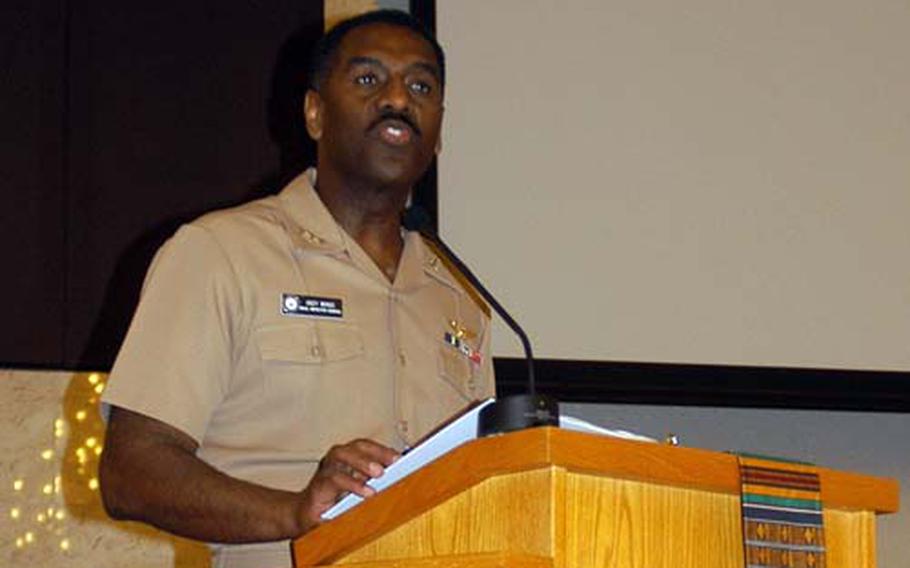 YOKOSUKA NAVAL BASE, Japan &#8212; Anthony Winns stood out when he arrived at his first duty station following flight school in 1980.

He&#8217;s glad that others are unlikely to face what he did &#8212; assignment as the only African-American among about 400 officers at Naval Air Station Barbers Point, Hawaii.

Winns noticed what seemed like little things, like not getting invited to parties for all the other junior officers.

But Winns, now a vice admiral and the nation&#8217;s highest-ranking black sailor, had experienced "subtle discrimination" before, he said.

He decided he would take it in stride and let his skill speak for itself.

"In the end, performance is what counts," said Winns, who spoke with Stars and Stripes between a six-speech schedule in Japan this week to support Black History Month. "Even at my first station, I performed particularly well. It made a big difference."

Winns lived with school segregation until the 10th grade in Jacksonville, Fla.

When he went to an integrated school, he was the only black person in the band. After winning the conductor&#8217;s job, he was forced to try out every year for the position &#8212; while white students earned their places and kept them through graduation.

Later on, as a student at the U.S. Naval Academy, he witnessed the controversy that followed after someone threw a white sheet over a statue of Tecumseh, the American Indian leader.

The seeds of a more diverse officer corps had just been planted when Winns arrived in 1974.

Zumwalt&#8217;s vision in the 1970s has borne fruit today. Winns&#8217; class includes four sailors at or above the two-star admiral level.

However, it was at then-Naval Air Station Barbers Point when Winns, a P-3 pilot at the time, saw the possibilities in store for him.

His commanding officer came over one day and told him: "You&#8217;re going to be in my chair someday."

"It was at that point I realized if I continued to do well in the Navy, that I had a shot at being successful," Winns said.

He was even more encouraged when some of his fellow junior officers pulled him to the side one day and told him that they thought he had what it takes to get to the top &#8212; and that it would be a shame if he left the Navy.

Today, Winns said, he believes the Navy is better committed to diversity and tolerance than it was 30 years ago.

Winns also knows that today&#8217;s generation has little direct experience with the level of segregation and discrimination he saw growing up.

Winns did his best to impart that experience Wednesday.

He spoke to students at Nile C. Kinnick High School early Wednesday and sailors at both the Yokosuka Chapel of Hope and aboard the aircraft carrier USS George Washington.

He first agreed to come to Yokosuka at the request of the carrier&#8217;s Master Chief Petty Officer Jeffery Clark, whom Winns knew as a third class petty officer at a prior command.

Some of the younger black sailors in the chapel audience talked about both the importance of remembering their heritage and a coinciding idea of race becoming, in a way, less important.

The best example of that for many is President Barack Obama.

"Being black &#8212; that was just an added benefit," said Petty Officer 1st Class Nicole Oliver, of Washington D.C., and Naval Criminal Investigative Command Far East. "To me it was: Who&#8217;s the best fit? It was because he was qualified."

The example of Winns and the many black officers and master chiefs in the Navy further advances that idea, Oliver said.

The contact for Black History Month events at Misawa is Staff Sgt. Teronda Hunter at DSN 226-6166.

Sasebo Naval Base &#9632; Event dates and details are still being finalized by the Multi-cultural Committee at Sasebo Naval Base. For updated information, call committee vice president Akaiya Miller at 252-3024.

The contact for Black History Month events at Yokota is Senior Master Sgt. Edwin Holland at DSN 225-8066 or edwin.holland@yokota.af.mil.

&#9632; Feb. 20, 1 p.m. The Yokosuka Bowling Center will host the 2nd Annual African American History Month Bowling Tournament. Three-person teams will bowl three games and trophies will be awarded for the top three teams. The winning command&#8217;s team will also receive a traveling trophy that they will keep until the following year. For information, call 243-5158.

&#9632; Feb. 16, 3 p.m. The Spectrum Center will host a Presidents Day and Black History Month Celebration. There will be a complimentary buffet, a presidential trivia competition, an NBA All-Star game replay and a skills competition.

&#9632; Every Thursday in February the Chief Petty Officer&#8217;s Club will offer a selection of soul, southern and Creole food.

Camp Walker &#9632; Feb. 20, 11:30 a.m. The 19th Sustainment Command (Expeditionary) and the 501st Sustainment Brigade will hold a luncheon at the Evergreen Community Club.

Chinhae Naval Base &#9632; Feb. 20. At the weekly all-hands meeting, a presentation by students from C.T. Joy Elementary School.

The contact for Black History Month events at Kunsan is Capt. Alexis Johnson at DSN 782-5113 or alexis.johnson@kunsan.af.mil.