Making it fit: With help from an Air Force expert, Stripes reporter hopes to reclaim his fit physique 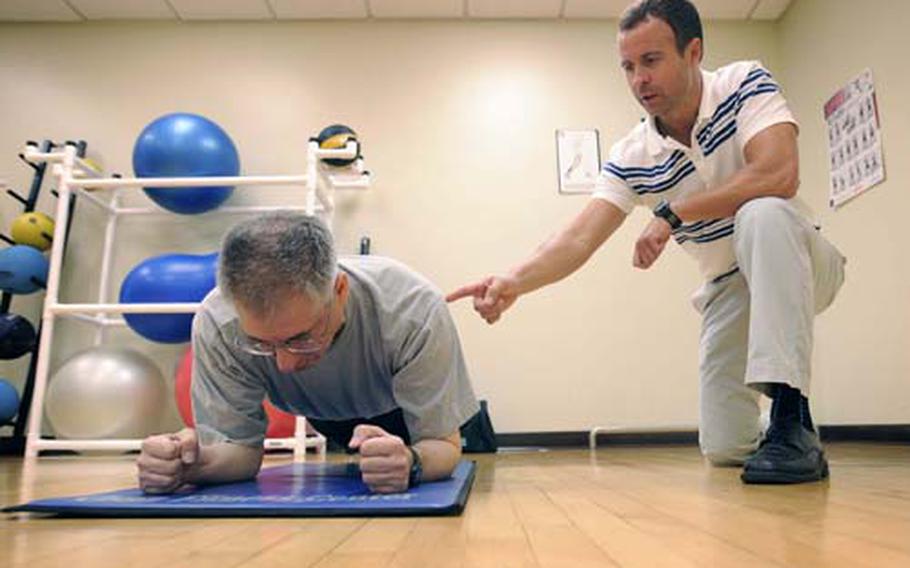 At Osan Air Base in South Korea, Stars and Stripes Reporter Franklin Fisher, left, executes an abdominal exercise called a front plank as U.S. Air Force exercise physiologist Dr. Reginald B. O’Hara instructs him on the correct form for the exercise. (Brian Ferguson/Courtesy of the U.S. Air Force) Franklin Fisher, right, practices proper execution of side shuffle exercises. The shuffles are an agility exercise to improve Fisher’s ability to move suddenly sideways as he might have to do when accompanying U.S. troops in Afghanistan or Iraq in a combat situation. (Brian Ferguson/Courtesy of the U.S. Air Force)

Although it&#8217;s nearly 40 years since I served in Vietnam, I&#8217;m launching an exercise program to make me fit for combat conditions &#8212; and will be blogging about it with whatever laughs at my expense that may entail.

An Air Force exercise physiologist drew up the six-day-a-week program tailored to my age (57), gender, weight and other factors, including my fitness goals, after taking measurements and running me through a battery of fitness tests.

How I fare in this effort will be the subject of a new weekly blog on the Stars and Stripes Web site.

We&#8217;re hoping, my bruised vanity notwithstanding, that you find it interesting, and maybe encouraging in your own efforts to get or stay physically fit.

I&#8217;ll be on assignment in Afghanistan or Iraq this winter and will post weekly updates from the war zone, for a look at how the regimen worked out in actual combat conditions. When I return in January, the physiologist, Dr. Reginald B. O&#8217;Hara, will look me over and give me a final report card on the whole effort. I&#8217;ll tell you that outcome in the final blog entry.

All the way into my late 40s, I&#8217;d stayed so trim and healthy through regular exercise and disciplined eating that people often complimented me on my fit appearance.

I&#8217;d done it mainly by sticking with the calisthenics and running I&#8217;d learned during my four years in the Army. I&#8217;d been a paratrooper, and served in the 82nd Airborne Division at Fort Bragg, N.C., in Vietnam in 1971 with the 173rd Airborne Brigade, and later with an Airborne element of the 8th Infantry Division in what was then West Germany.

As I approached and then entered my 50s, my exercise routine dwindled to almost nothing. And the effects, of course, began to show.

Moreover, what for decades had been a set of washboard abs had given way to a paunch and flab at the midsection.

So I&#8217;ve set myself to lose the flab, shake off the health risks it poses, resurrect a fitness-oriented lifestyle and a trim, fit body.

The goals are several:

First, weight loss. Every last bit of weight that doesn&#8217;t belong on my body goes.

So our official target weight for this get-fit effort is 164.5 pounds. That, he said, will put me in the "excellent" category for a male my age.

A second goal is overall conditioning: Exercising for improved strength, flexibility, agility, and &#8212; crucially &#8212; a healthy heart and cardiovascular system.

A third goal is to ready myself for keeping up with combat troops in the war zone, as I did with no problem during two previous assignments as a Stripes reporter covering U.S. troops downrange.

This time, too, I intend to hit the ground ready to keep up with those troops, whatever the rigors.

The doc is inDr. Reginald B. O&#8217;Hara is an associate research physiologist with the U.S. Air Force Research Laboratory at Wright-Patterson Air Force Base in Ohio, assigned to the 711th Human Performance Wing&#8217;s Human Performance Optimization division.

He holds a Ph.D. in exercise physiology and is a member of the American College of Sports Medicine.

He is on assignment to Osan Air Base in South Korea as an exercise physiologist, where he supervises the base fitness program, working with active-duty military personnel to increase physical fitness performance and rehabilitate fitness-related injuries.

Dr. O&#8217;Hara&#8217;s fitness plan geared to combat needsU.S. Air Force exercise physiologist Dr. Reginald B. O&#8217;Hara has drawn up a six-day-a-week fitness plan in two versions. One can be done at home and outdoors and requires none of the exercise machines typically found in a gym; the other is for use in a gym like the fitness center at Osan Air Base in South Korea.

I&#8217;ll be following the plan for home and outdoors, but I might occasionally switch to the one for gym use.

The exercise routineFor the upper body, it includes push-ups, chin-ups, some free weights, and exercises with resistance bands. For abdominal strength, there are crunches and plank exercises.

For aerobic fitness, there&#8217;ll be walking and running, as well as exercises to strengthen certain muscle groups in the legs.

O&#8217;Hara emphasizes the importance of gearing fitness training to the real-world needs of the combat zone. So he&#8217;s designed the entire program to include exercises that will get me ready for the sudden twists, turns and sprints that are sometimes necessary downrange, particularly when a unit comes under fire.

Accordingly, agility training includes side-shuffles &#8212; a rapid shuttling to the right or left and back again; walking and running in zigzag patterns; and walking and running backward. For improved balance, there&#8217;ll be work with a balance board.