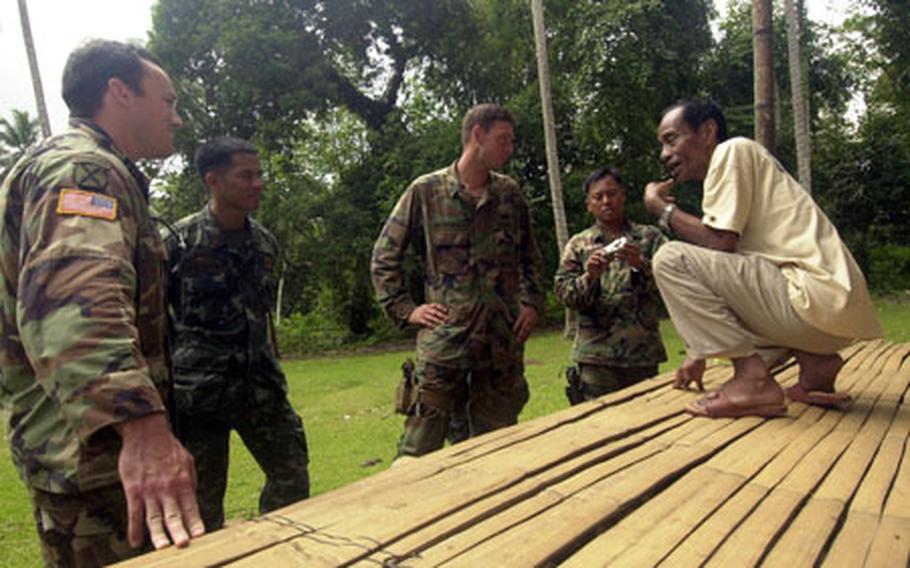 U.S. and Filipino personnel discuss planned renovations to a Jolo Island school that sits on one of the main routes local insurgents use to access the Jolo Island coast. U.S. officials hope that the project will encourage local residents to report insurgent activity. (T.D. Flack / S&S)

JOLO ISLAND, Philippines &#8212; A tiny two-room school that sits off a dusty road in the middle of the jungle on Jolo Island could play a role in the battle between Abu Sayyaf terrorists and the Philippine government.

With its cracked foundation, peeling paint and major structural damage, it looks like hundreds of other rural schools scattered across the southern Philippines.

But what makes the Tayungen Elementary School special is its location.

The terrorists, who use the eastern half of Jolo to regroup and rearm, travel past the school&#8217;s village on their way to wage war with the Philippine armed forces.

Battle has big plans for the school. He said a minimal investment of time and money for renovations could persuade local villagers to &#8220;deny the ASG sanctuary&#8221; and to &#8220;tell them to get lost.&#8221;

Battle runs a four-man Army civil affairs team in a strategically important location on the kidney-shaped island, where the land pinches together into just a three-mile strip from shore to shore.

His self-described mission is to drive a wedge between the Abu Sayyaf and the local population through these types of projects.

The goal is to get on the ground, assess the people&#8217;s needs and figure out whether those needs help Battle&#8217;s mission.

&#8220;My true objective,&#8221; he said, is to improve the local population&#8217;s opinion of the Philippine military and government, taking the power away from Abu Sayyaf.

He&#8217;s not trying to conduct projects that affect the greatest amount of people.

The site is in &#8220;bad guy&#8221; land, meaning a heavy escort including a &#8220;platoon-plus&#8221; of Philippine marines in the convoy. U.S. troops never leave their compound without a Philippine military escort.

Even with the focus on security, Battle said the situation on the ground is constantly improving.

The recent addition of two more Philippine marine battalions in the eastern portion of the island has helped, Battle said.

Battle said the improved situation on the ground means he was finally able to persuade various nongovernmental groups to be part of three upcoming medical exercises. Some of those groups have never been to the eastern half of the island due to safety concerns, he added.

He said bringing those groups to the remote areas allows villagers to see &#8220;Filipinos helping Filipinos.&#8221;

Battle is convinced his team&#8217;s unconventional work will help the Philippine government in their fight against the Abu Sayyaf.