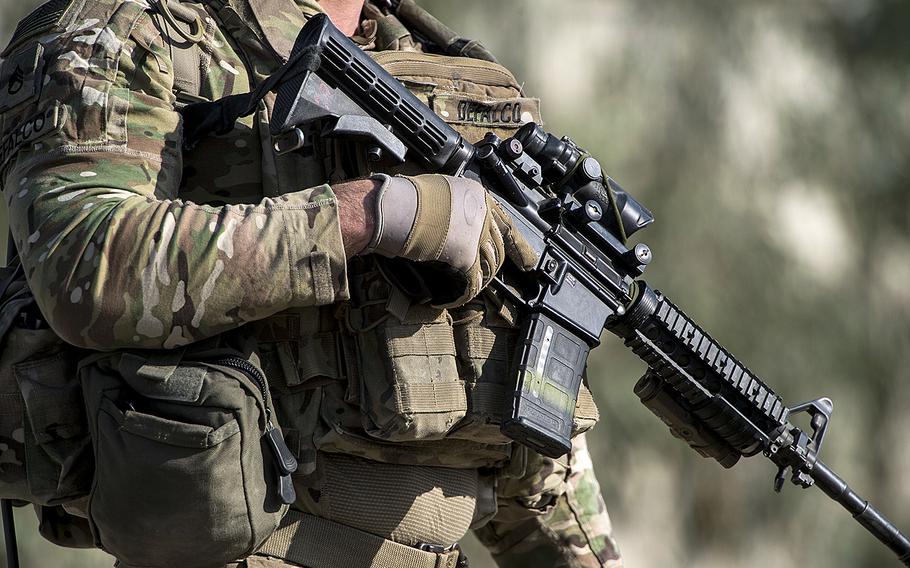 A U.S. soldier assigned to the 10th Mountain Division provides security during a mounted patrol outside of Camp Fenty, Afghanistan, on Feb. 25, 2016. (Corey Hook/U.S. Air Force)

KABUL, Afghanistan — Afghan and international forces expect a major battle to begin soon for control of southern Helmand province, largely overrun in recent months by the Taliban. The question is, who will strike first.

Coalition and Afghan officials say Afghan forces have taken advantage of a lull in fighting due to the poppy harvest in Helmand — the Taliban’s chief source of revenue — to retrain, reorganize and boslter their numbers and are ready to take the offensive.

Before the lull in fighting, the Taliban had seized large swathes of the province raising fears the insurgents could wrest control of the provincial capital, barely six months after they briefly captured the northern city of Kunduz.

NATO and Afghan officials have said the Afghans are poised to fight in Helmand, where nearly 1,000 American, British and other international servicemembers have been killed during the 15-year war.

A battalion-strength infantry unit from Ft. Drum, N.Y., part of the 10th Mountain Division, was recently deployed to the region to reinforce the government forces there.

Still, some local officials worry that the Taliban could seize the initiative while government forces await orders from Kabul.

“The threat is becoming bigger minute by minute,” Bashir Shaker, a member of the provincial council, told Reuters on Tuesday. “If the government does not take action soon, we will witness the collapse of Lashkar Gah,” the provincial capital.

Taliban fighters have launched multiple attacks on police checkpoints in Helmand in recent days, killing at least three police officers Sunday and, by some reports, another 15 on Tuesday.

The attacks, which occurred in the Babaji area on the outskirts of Lashkar Gah and Tuesday in areas to the north and west of the city, come just days after a top U.S. official told reporters the Taliban would likely launch offensive operations in the province soon.

“The Taliban tend to exaggerate their tactical gains,” said Michael Kugelman, a South Asia specialist at the Washington-based Woodrow Wilson International Center for Scholars. But, he said, the Taliban are putting up “a pretty big fight.”

“Make no mistake, the Taliban wants to take Helmand,” he said.

In early April, the Taliban announced the start of their spring offensive. A car bomb days later rocked Kabul, killing dozens of people and wounding hundreds more. Government forces have also been fighting the insurgents near the northern city of Kunduz, which the Taliban had held briefly last fall — seizing a provincial capital for the first time since the U.S.-led invasion ousted them 15 years ago.

But Helmand has seen a lull that began in late March when most Taliban fighters in the southern province took a break from fighting to harvest the milky gum from poppies that, when dried, becomes opium — the insurgent group’s most lucrative revenue source.

Speaking to reporters last Thursday, Army Brig. Gen. Charles Cleveland, the main spokesman for NATO’s mission in Afghanistan, predicted the harvest’s imminent end and the launch of “the next big Taliban push” in Helmand.

On Wednesday, Cleveland said, “We think it’s starting to go.”

Often described as the Taliban’s heartland, Helmand was the site of fierce fighting throughout the U.S.-led NATO combat mission, which ended in 2014.

Since the U.S. and international forces withdrew, militants have driven much of the Afghan security force out of swathes of Helmand. A stepped-up insurgency there in the weeks before the harvest had left “a sizeable portion” of the province contested or under Taliban control, mostly in its northern region, Cleveland said. There had been media reports the provincial capital was about to fall.

The United States has largely blamed poor leadership within the Afghans’ 215th Corps for the losses, but the lull in fighting has allowed time for hundreds of U.S. troops to return to the province and help retrain the Afghan unit. Leaders have been replaced and the unit appears better trained now, Cleveland said. And, he said, the Afghans’ confidence has been boosted by recent successes in the north, such as around Kunduz.

The Afghans have overcome the “challenges” they faced last year, one of the bloodiest on record since 2001, Afghan Defense Ministry spokesman Gen. Dawlat Waziri told reporters earlier this month. He added: “2016 is the year of defeat for the enemy.”

While U.S. and Afghan officials have said the government will soon mount an offensive against the Taliban in Helmand, security forces appear to remain largely in defensive positions.

But they are ready to start the operation as soon as they get the order from the central government, Helmand police chief Abdul Rahman Sarjang said. “We are waiting for the order to start the clearance operations.”

Kugelman said it’s too early to tell who has the edge in the fight for the province, though he said the fact that U.S. and Afghan special operations forces have been deployed to the area gives him some reassurance that “all is not lost.”

“Both sides are digging in, so I think it’s going to be a very long, pitched battle.”