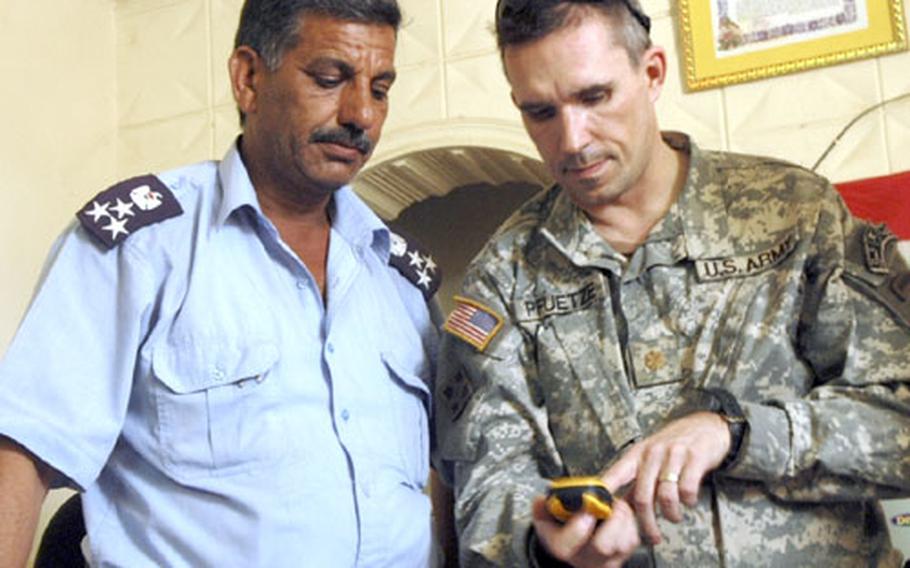 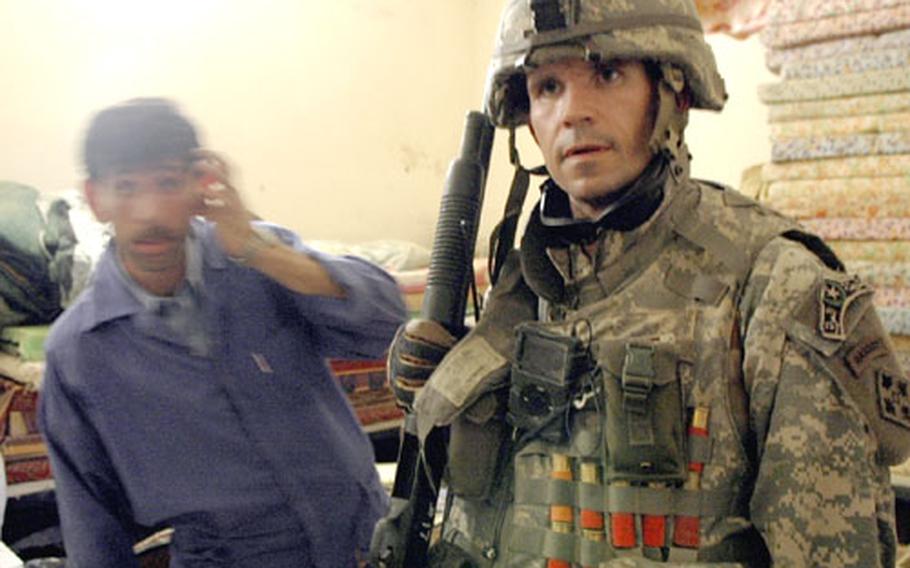 Maj. Karl Pfuetze, with his shotgun slung over his shoulder and his iPod tuned to Led Zeppelin, examines a storage room at the Dujayl police station. (Anita Powell / S&S)

With his acerbic, brash language, the stock of supplies he hands out to local police departments, and the 12-gauge shotgun he slings casually over his shoulder, he resembles a green-suited, profane and not-very-jolly Santa Claus.

After a stint on Wall Street in the early 1990s and a year as an infantry company commander in this area north of Baghdad in 2003, Pfuetze, 38, now an Iraqi police liaison officer for 1st Battalion, 8th Infantry Regiment, part of the Fort Carson, Colo.-based 4th Infantry Division, seems oddly suited to working with the wheeling, dealing and outright stealing that has come to characterize Iraq&#8217;s police force.

Whipping the police departments into nationally-respected, fully-accountable public bodies is a challenge, he said, and something he doesn&#8217;t expect to conquer during his time here.

Incompetence and corruption aren&#8217;t the main problems, he said. Rather, it&#8217;s the Baghdad-level bureaucracy that determines which local police department gets Iraqi Security Forces funds, which are separate from the more easily accessible Commander&#8217;s Emergency Relief Project funds.

As he waits for approval on those big projects, he regularly meets with local police departments to give out needed equipment and listen to a multitude of requests for weapons, ammunition, medical supplies, gasoline and money. The meetings have an element of high theater, as Pfuetze is wont to be comically, almost painfully, blunt. Pfuetze &#8212; whom colleagues jokingly call &#8220;Sheik Pfuetze&#8221; &#8212; doesn&#8217;t mince words. In fact, much of what he says is unprintable.

To another request from a local fireman to supply local firefighters with firepower, he laughed outright.

Local police officials agree that their departments have serious shortfalls.

&#8220;The only thing that makes us need this support from the coalition forces is the weak government we have now,&#8221; said Dujayl police chief Gen. Mohammed Latif.

Local officials also agree that corruption is a problem. Everywhere, of course, but in their police department.

But problems are clearly evident at other stations, where Pfuetze often arrives to find policemen manning checkpoints with dirty weapons, mismatched uniforms and yet another laundry list of requests for equipment he gave them the week before.

After stopping at a highway checkpoint and being accosted with requests of everything from water to bullets to uniforms, he shook his head as he walked to his Humvee.