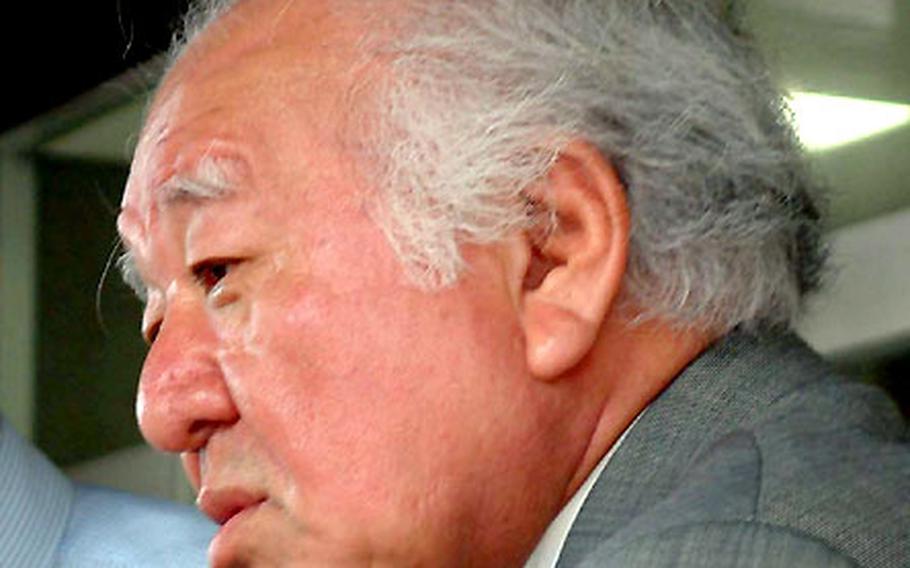 Although the prosecutor detailed accusations against the 19-year Marine veteran, the defendant said little.

&#8220;Brown pleaded not guilty, but decided not to say anything until the prosecutor presents all the evidence,&#8221; said defense attorney Toshimitsu Takaesu after the hearing. The next court session is set for May 1, when the woman is expected to testify.

Brown, 40, made the plea almost four months to the day of his indictment in December on charges he sexually assaulted an employee of the Camp Courtney club. He has been in the Naha Detention Center since his indictment.

He also pleaded not guilty to a charge of throwing her cellular phone into a river when she attempted to call police.

And then he said little else.

When Chief Judge Nobuyuki Yokota started to ask him about details of the charges, Brown refused to expand on his plea.

&#8220;Do you mean you never grabbed the arms of that woman?&#8221; the judge asked through an interpreter.

&#8220;I plead not guilty to the charges and exercise my right to silence and ask that these specific questions be asked through my attorney,&#8221; Brown said.

That ended the questioning.

Brown&#8217;s demeanor was different from his first appearance last month. By order of the chief judge, the handcuffs and tether to the guards were removed before Brown entered the courtroom, and he was allowed to wear shoes instead of the prison-issue plastic slippers he wore in March. He also wore a dark suit.

As he sat between two guards on a bench in front of the defense table, Brown took notes while prosecutor Tsuyoshi Satake made his opening statement. He also occasionally smiled at his wife and a family friend during the hearing.

According to Satake, Brown was at the officers club on Nov. 1, leaving shortly after the club closed at midnight. He allegedly asked a 40-year-old cashier, a Filipina who has lived on Okinawa for 20 years, for a ride to his off-base home in Gushikawa, but she refused.

Later, when she left a nearby office where she had counted the night&#8217;s receipts with her manager, Brown again asked for a ride home, Satake said. The woman relented, he said.

He said Brown fondled the woman, who resisted his advances, jumped out of the car and ran away.

The woman let Brown back in the car, Satake said. She later told police she&#8217;d wanted to learn why he had attacked her; she drove a short distance away and parked by the Tengen River.

Satake said that&#8217;s where Brown attacked her a second time.

The woman again ran from the car &#8212; and returned a second time when she saw Brown leave, Satake said.

She then drove to Camp Courtney&#8217;s main gate and reported the incident.

Brown consistently has denied the woman&#8217;s charges, Okinawa police said. He told them the woman became upset when he rebuffed her sexual advances.

The only witness to testify Thursday was a police officer who photographed red marks on the woman&#8217;s arms and neck at about 4 a.m. the day of the incident. The officer said he believed the marks were caused by someone grabbing her. He agreed, however, that his report differs from a report of a medical exam that states the woman had no bruises or other marks when she was examined at 10 a.m.

The case is scheduled to last several months, with a four-hour session every two weeks or so.