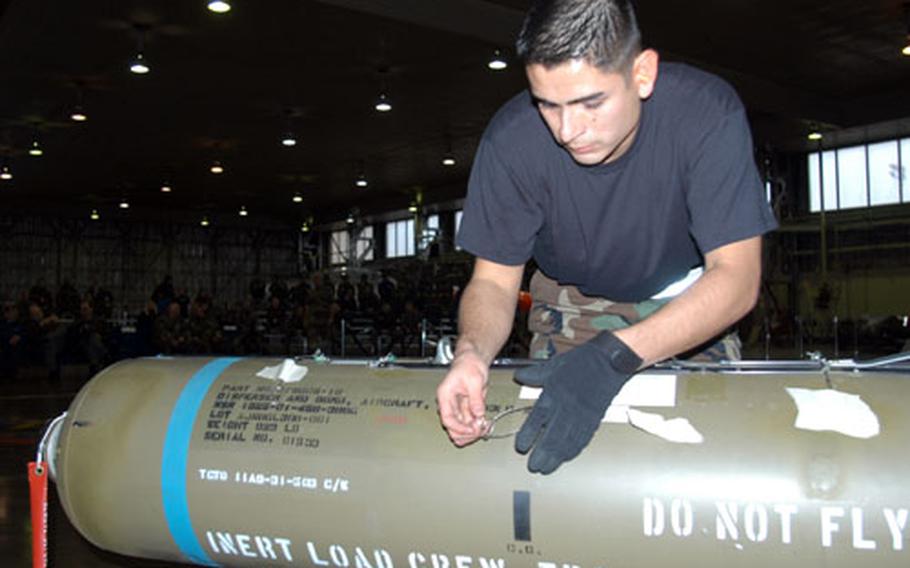 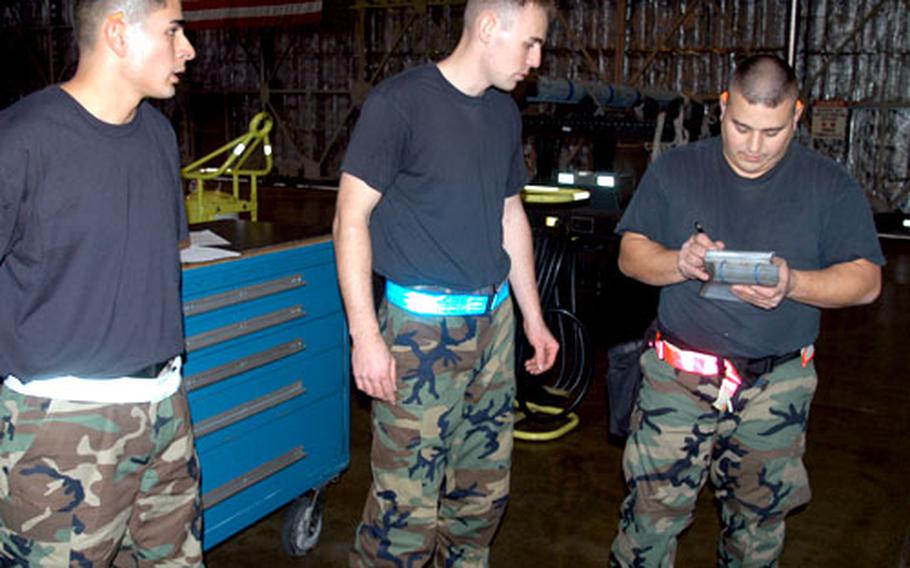 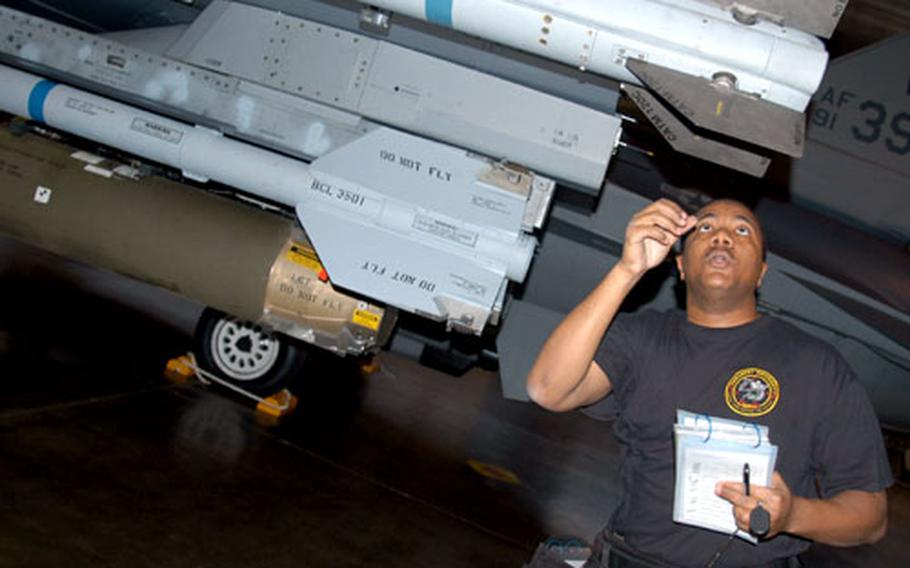 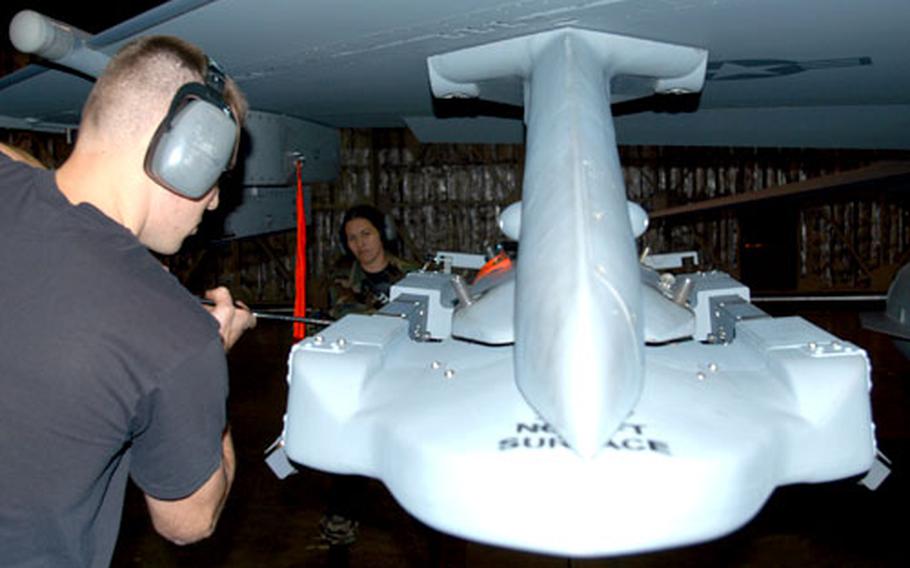 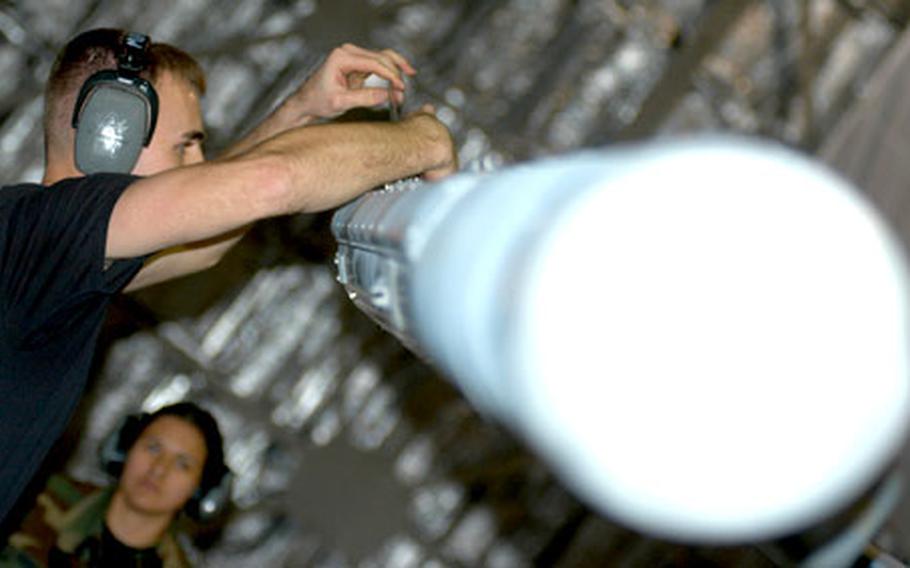 In 15 minutes, he was to do something he practices routinely &#8212; except now it would be before dozens of his colleagues, two generals, three judges and a ticking clock.

The &#8220;load crew of the year competition&#8221; can fray nerves, as some of Misawa&#8217;s airmen discovered Tuesday when they battled to earn bragging rights as the base&#8217;s best weapons loaders. Two aircraft maintenance units from 35th Maintenance Group each had to install two missiles and a bomb on an F-16. The team with the fastest time and fewest errors wins.

The year-end competition is more challenging, however: Each team starts out with 2,000 points and must answer a 20-question test about their job, undergo a dress-and-appearance evaluation and perform in front of an audience.

Bleachers and special seats were set up in the hangar Tuesday for numerous U.S. and Japan Air Self-Defense Force airmen whose job it is to load fighters, along with 35th Fighter Wing and base commander Brig. Gen. Bill Rew and JASDF 3rd Air Wing Commander Maj. Gen. Hidetoshi Hirata.

It typically takes about 47 minutes to install weapons, Reyes said. For the competition, his team was hoping to finish in 17 minutes. Though Reyes and crew finished several minutes ahead of the 13th Aircraft Maintenance Unit of Staff Sgt. Jerod Miller, Senior Airman Nathan Werley and Senior Airman Webb Wiggins, results won&#8217;t be announced until Tuesday.

Master Sgt. Edward McDaniels, weapons superintendent, 35th Maintenance Group, said evaluators need time to write up the results. Also, the flight chief for each team has the opportunity to argue any marks.

Oversights that can whittle down a score include failing to set a jet&#8217;s parking brake before loading weapons or using the wrong fuse setting on a bomb, McDaniels and Ingalls said.

Members of both teams said Tuesday they were a bit worried about using a new bomb rack that can carry two cluster bomb units instead of one. The rack simplifies the loading process, but they only recently began training to use it.