Maintenance unit keeps B52s flying out of Guam base 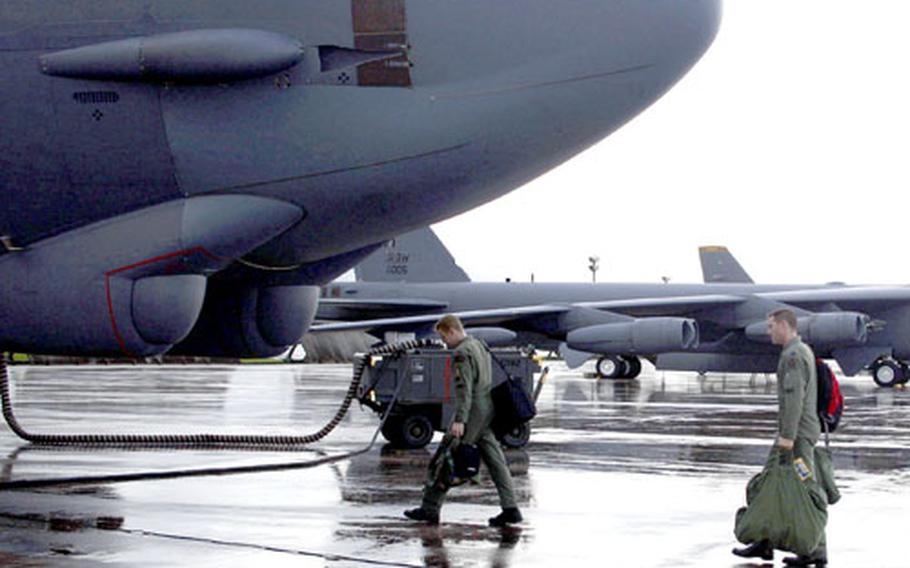 Rain, like the heavy weather above, is just one of the challenges that have confronted the 23rd Expeditionary Aircraft Maintenance Unit. The unit has been deployed from Minot Air Force Base, N.D., to Andersen Air Force Base, Guam, to maintain six aging B-52s. (Special to S&S)

But despite the rain and constant maintenance challenges posed by Guam&#8217;s heat, humidity and salty air, the 177 bomber maintenance personnel from Minot Air Force Base, N.D., have managed to keep the B-52s in good enough trim to allow the aging bombers to complete all 72 of their scheduled sorties.

Bombers from Minot were the first deployed as part of the current bomber rotation to Guam in February 2004. Since then, both the hosts and the bomber units have refined their procedures, said Col. Mark Mueller, Guam&#8217;s 36th Maintenance Support Group commander. &#8220;We use lessons learned from the previous similar units to identify the unique needs of the particular platform that comes in &#8212; whether it be B-52s, B-1s or the B-2.

Input from crews passing through provides new perspectives and leads to improvements, he added.

The 23rd Expeditionary Bomber Squadron aviators, meanwhile, are taking advantage of the flight-ready planes to train in the Pacific.

&#8220;The integration with some of the other units in a different theater is something that we can&#8217;t get at home,&#8221; said Lt. Col. Gerald Haunchell, 23rd EBS commander. From Guam, the unit flies training missions to Asia, Australia and Hawaii.

A separate rotational deployment of KC-135 air tankers to Andersen, Haunchell said, means the bomber pilots see a refueling tanker &#8220;just about every day. That&#8217;s good training for the guys. They&#8217;re getting some good experience.&#8221;