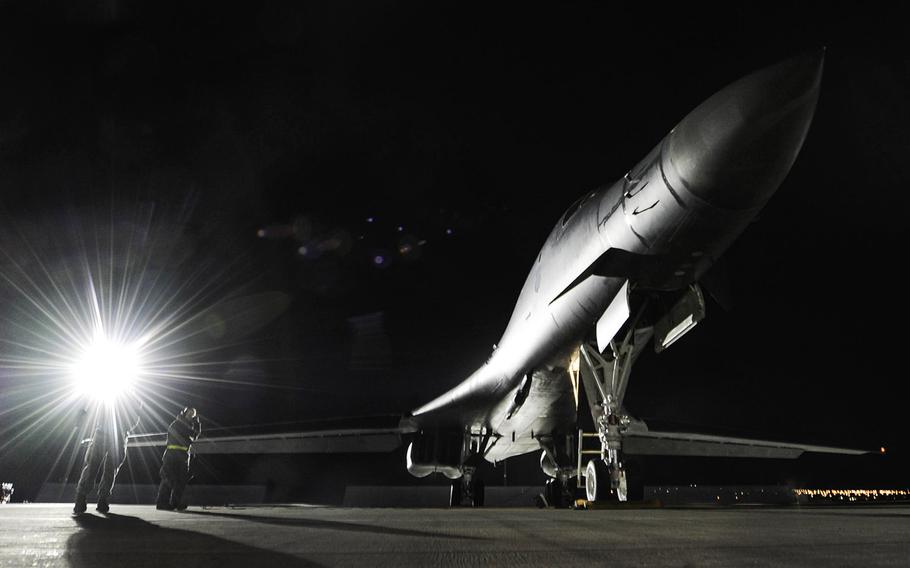 WASHINGTON — The Air Force’s most maintenance-intensive aircraft isn’t its oldest, or even its stealthiest. It’s the B-1 Lancer, and the bomber needs about 150 hours of maintenance after each flight.

“The B-1 is the most manpower-intensive aircraft in the inventory by far,” said Col. Michael Lawrence, chief of the Air Force’s maintenance division. “That’s three to four times more than any other platform in the Air Force.”

The nation’s remaining 62 B-1 bombers are about 30 years old. They’ve seen constant combat for the last 15 years, and the pace of operations has taken a toll. Of those 62 aircraft, only about 25 are ready to fly on any given day, Lawrence said.

“Our No. 1 challenge is our inability to generate the number of sorties our aircrews need to make them proficient,” Lawrence said. “The Air Force is spending a great amount of time and resources to try and help with that problem.”

The B-1, a $317 million supersonic bomber that can travel at speeds greater than 900 mph and can be configured to carry more than 70,000 pounds of a wide variety of bombs, fills a mission gap between the Air Force’s 75 heavy-lifting B-52s and the 20 B-2 stealth bombers. B-2s are in the air for nuclear deterrence. They aren’t typically used in conventional bombing missions against targets such as Islamic State militants, but did carry out a January airstrike against Islamic State training camps in Libya. The B-52s are used for conventional bombing but lack the B-1’s speed. That speed made the B-1 one of the largest contributors of munitions dropped on the Islamic State group until it was pulled back from that operation in early 2016 for maintenance and modernization.

For the B-1, there’s short-term maintenance and long-term maintenance. The Air Force has started to measure maintenance in terms of whether the repair can be made within 12 hours of a B-1 landing, Lawrence said. If repairs stretch beyond that, there’s a greater chance that the aircraft won’t be available in time for its next scheduled flight.

Going past 12 hours “starts to ripple into the next day’s flying schedule, which means one more jet that you can’t fly. … It’s like a domino effect,” he said.

Staff Sgt. Rawlinson Santaella, a crew chief with the B-1’s 28th Aircraft Maintenance Squadron at Ellsworth Air Force Base in South Dakota, said the clock starts as soon as the bomber lands.

“From the moment we marshall the aircraft in,” maintainers start querying the four pilots about issues they experienced or anything unusual that occurred during the flight, Santaella said.

At least three ground crewmembers will approach the bomber, along with maintainers for specific repairs who also will rotate the plane. As many as 18 ground crewmembers can work on a bomber during a 12-hour time frame, Lawrence said.

“We like having as many bodies as we can out there,” Santaella said. “The more eyes you get on the jet, the more you can catch.”

The crew conducts a full flight inspection, walking underneath and on the bomber’s 137-foot wingspan, looking for missing or cracked panels, Santaella said.

About 17 percent of the time, the bomber lands reporting a system malfunction that will render it non-mission-capable and require a fix before the aircraft is allowed back in the air, Lawrence said. Each of those fixes adds to the 150 man hours of planned maintenance.

The B-1 is “incredibly complicated,” he said, and even when the repair is simple, “the size and girth of the airplane makes it incredibly difficult to get to some of the points you want to get to.”

For comparison, the B-2 stealth bomber, with its advanced technology, requires only about 43 hours of maintenance after each flight, Lawrence said.

In January 2016, the Air Force finally pulled the B-1 from Operation Inherent Resolve duty so it could get needed cockpit modifications. It was the first time there had been no B-1s at Al Udeid Air Base in Qatar since 2006.

The service “determined that we needed a little bit of relief for the B-1” to get modernization that had been deferred, “because we were using them at such a high clip,” Air Force chief of staff Gen. David Goldfein told reporters in early February.

The cockpit overhaul takes about 243 days per bomber and will result in a modernized sensor and communications system that will allow the B-1 to connect with other aircraft and weapons systems, Lawrence said.

The Air Force expects that all the aircraft will have completed the modifications by 2021, raising the number of available bombers and, as a result, reducing the wear and tear on the fleet.